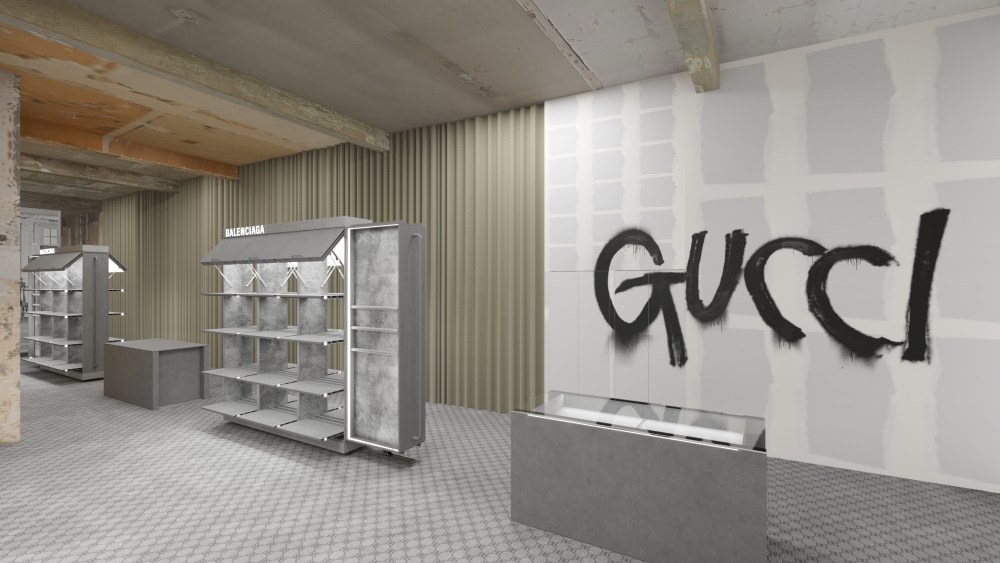 On Monday, Balenciaga’s Hacker Project will launch in pop-up and pop-in stores globally.

The Hacker Project will be introduced in 74 physical spaces worldwide with Balenciaga pieces that reinterpret Gucci codes and in so doing, question the idea of branding, appropriating and counterfeiting.

Several of Balenciaga’s signature architectural elements — logo-shaved carpet, velvet stage curtains and weathered metal — are reimagined for the introduction. Carpets and curtains are etched with a classic Gucci allover print, but with double-Bs substituted in for double-Gs. Aluminum displays are stained with acid to mimic scrubbed graffiti. Store windows are tagged in the graffiti style with “Gucci.”

In select locations and for a limited time, double-B monogram shopping bags will be hand-tagged by a local artist at the time of purchase. These can be customized and personalized with a customer’s first name, reading, “This is [insert first name’s] Bag.”

Balenciaga and Gucci introduced the Hacker Project during their spring 2022 shows, with part one — the Gucci series — introducing cross-branded Gucci merchandise that featured the Balenciaga signature. Part two — the Balenciaga series — combines Gucci codes such as its enduring colorways, luggage details and logo patterns, with recognizable Balenciaga structures and styling throughout the merchandise.

As noted last June, Balenciaga creative director Demna Gvasalia zeroed in mostly on the Florentine house’s iconic GG monogram canvas — which dates back to the ’60s — and transformed it with double-B logos. These appear on a range of bags that are otherwise near ringers for the Gucci ones. With humor and a wink to René Magritte, Gvasalia spray painted “This Is Not a Gucci Bag” on the largest tote. There are also small leather goods, caps, BB-buckled belts and scarves as part of the series.

“My approach was very minimal. I didn’t change much,” Gvasalia said in a WWD interview last June, confessing what a thrill it was to “vandalize a bit” the BB tote with black paint. “I had the pleasure of doing that on the prototype.”

On Nov. 10, the Council of Fashion Designers of America named Gvasalia the International Women’s Designer of the Year.