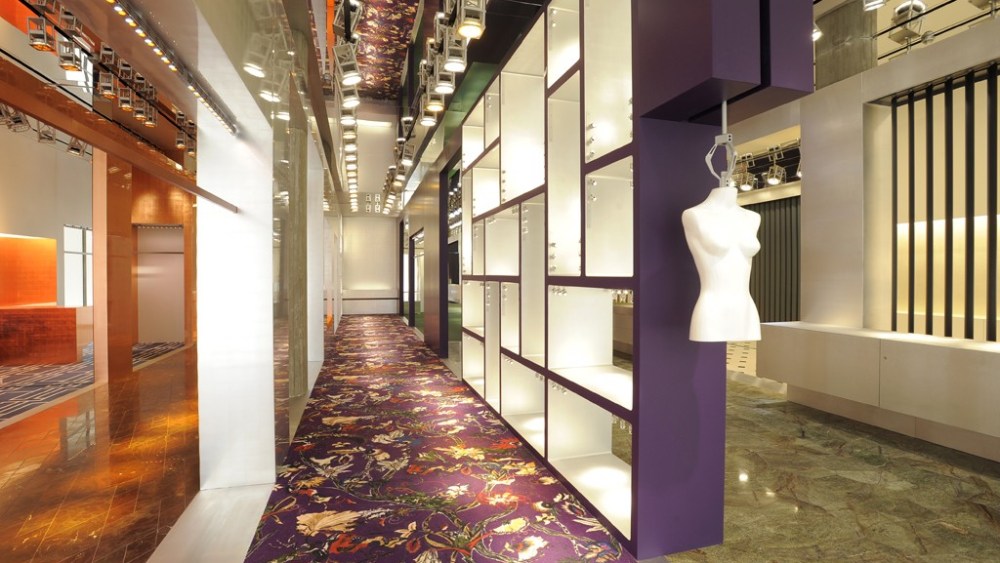 Balenciaga’s 60th directly operated store — boasting 40 feet of frontage on the bustling Rue Saint-Honoré — also symbolizes how the company has quickly accrued critical mass in retail, which now accounts for more than half of its revenues. (Less than five years ago, it only had three locations.)

“We try to be as balanced as possible between the newly created retail expertise and our wholesale background and future development,” Isabelle Guichot, Balenciaga’s chief executive officer, said in an exclusive interview. “That changes your point of view, becoming a retail company.”

Balenciaga continues to expand its store network, having already added six locations this year — including in Shanghai, Nanjing and Taiwan — with up to seven more to come before the books close on 2012.

Already open is a 540-square-foot women’s accessories unit in Venice — where fractal slabs of burgundy marble abut mint green walls — and coming later this summer is a 3,760-square-foot, two-level unit on Rome’s swanky Via Borgognona.

While Balenciaga’s store count is still dwarfed by many of its designer competitors, simply adding doors is no longer the sole focus of the brand, controlled by PPR, parent of Gucci, Yves Saint Laurent, Bottega Veneta and other fashion houses. Some units require renovation, while others need to be enlarged.

“We now need to optimize the network. It’s not only adding locations — it’s also securing the future growth of the existing locations,” Guichot said over coffee in her spare office, which boasts a striking view of the Eiffel Tower and the golden cupola of Invalides.

Some units in Japan, for example, are only large enough to display about 30 percent of Balenciaga’s collections, whereas Guichot’s goal is to “illustrate the brand fully” in as many locations as possible.

The shop-in-shop here at Galeries Lafayette will also be extended as the department store embarks on a major renovation project. “It’s already reached the limit,” she noted.

Balenciaga and its influential creative director Nicolas Ghesquière initially earned a reputation for planting stores in offbeat locales, such as the Chelsea art district in New York, Melrose Avenue in West Hollywood in a former tile manufacturer, or Via Santo Spirito in Milan, an off-the-radar branch of the city’s so-called “golden triangle” of retail.

That impulse has eased recently in favor of high-traffic streets, yielding a more varied retail complexion. Guichot calls it a “maturing process” for the brand that now values a balance between destination and “image” stores and ones on more popular retail strips.

Guichot allowed that Balenciaga still has wide swaths of geography in Europe to cover, with no directly operated stores yet in Germany, Switzerland and Spain, the birthplace of the house’s founder, Cristóbal Balenciaga.

The new Rue Saint-Honoré unit, close neighbor of the hip boutique Colette, joins a burgeoning retail strip, with Moynat and Dsquared2 among recent arrivals, and Chloé and Theory among those coming soon.

Balenciaga’s space, formerly a gas station, offered the brand a vast, rectangular space of about 3,200 square feet spread over one level — a rarity in a city full of landmark buildings with higgledy-piggledy layouts.

As in all Balenciaga units, Ghesquière and the French contemporary artist Dominique Gonzalez-Foerster collaborated on the interior concept. She calls the Rue Saint-Honoré store a “catalogue” of its key boutiques, each of which has a different color scheme and mood. (There’s even a preview of the yet-to-be-opened SoHo unit in New York, with an emphasis on the color purple and floral carpets.)

“After 10 light years exploring space through the most various galaxies, the new place in Paris brings together the fragments collected during those explorations, like a collection of synchronized scenes,” Gonzalez-Foerster said, joking that she dreams one day of making a sci-fi movie with Ghesquière.

Pedestrians strolling on Rue Saint-Honoré are surely to be struck by the store’s division into vertical strips — like a theater stage with its various backdrops viewed in cross-section.

However, shoppers can circulate across the store’s linear topography, discovering complete product ranges.

Heightening the store’s theatricality, Ghesquière and Gonzalez-Foerster opted for drum-shaped spotlights to illuminate the store: large ones for big vistas, miniature varieties for jewelry cases.

Guichot noted that selections of runway designs and Edition pieces would be apportioned across its two key Paris boutiques, but that the merchandise selections would be customized so customers would make discoveries in each.

The executive declined to give first-year sales projections for the Saint-Honoré unit, or discuss any figures.

She would only say that Balenciaga continued to post double-digit sales growth in 2011 and the first quarter of this year, in line with what parent PPR reported. At constant exchange and markets, revenues in “other luxury brands” — which include Stella McCartney, Brioni and Alexander McQueen — jumped 20 percent in the three months ended March 31 to 283.2 million euros, or $371 million at average exchange.

While Rue Saint-Honoré circulates with more local residents than the Avenue Montaigne district where most luxury boutiques are concentrated, Guichot noted a proliferation of upscale hotels nearby, including the Costes, Le Meurice and the new Mandarin Oriental. “The traffic is really steady, and it’s a very mixed traffic,” she noted.

Meanwhile, Balenciaga continues its expansion in the digital realm. Its online store, revamped in July and initially launched in the U.S., France and U.K., now ships to 24 countries.

“We’re thinking about Asia now as the next step for e-commerce,” Guichot said.

As for other avenues of business development, Guichot noted that Balenciaga plans to “densify existing categories” of products, rather than adding new ones. She listed men’s wear, footwear, jewelry and eyewear among categories ripe for expansion.