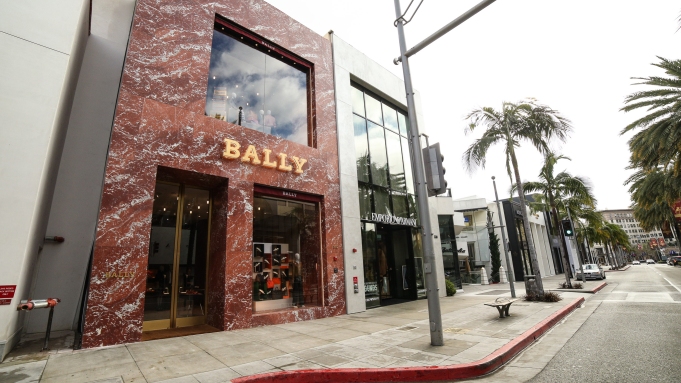 Bally is betting on Los Angeles to help kick-start its retail renaissance in the U.S.

The 165-year-old Swiss brand, now owned by JAB Holdings and based in London, continues its reboot under chief executive officer Frédéric de Narp with the unveiling Thursday of its first U.S. flagship, at 340 North Rodeo Drive, which was designed by David Chipperfield Architects.

The 2,013-square-foot store features a two-story red marble facade with brass accents. Nestled between Tom Ford’s all-white storefront and Emporio Armani’s sleek black one, the store adds a new and colorful element to the established archetypes on the storied street — Prada’s brushed steel facade and Gucci’s reflective gold one sit across the way.

“From the day I entered the company 26 months ago, the first priority was to bring Bally back to America,” de Narp said. “It is simply the most important market in the world, and L.A. more than anywhere else influences the rest of America and the rest of the world. There are great brains and influence there.”

Bally’s commitment to DCA to design 15 stores over the next 12 months reflects its heritage of collaboration with Modernist architects such as Le Corbusier and Andrée Putman. Marcel Breuer’s design for a Bally store from 1921 was Chipperfield’s main inspiration, elements of which included the stockroom wall concept, which he used in the women’s and men’s shoe salons.

While a DCA prototype opened in London on New Bond Street in October 2014, Rodeo Drive represents the first fully realized retail vision and will be followed by a store in Tokyo’s Ginza in late March and Beijing’s China World later this year. In 2017 a New York flagship will open at Madison Avenue and 62nd Street.

The allover marble facade, in the oxblood shade that has been Bally’s corporate color since 1931 and is still used in its signature trainspotting stripe, continues inside the store, where it mingles with American walnut walls and white hand-poured magnesite floors.

The first floor features women’s handbags and small leather goods in the front and ready-to-wear and shoes in the back. The seating areas have four original leather and two wicker Jean Prouvé Pierre Jeanneret chairs from Bally’s archives. In a nod to California, Bally creative director Pablo Coppola designed a surfboard with a local board shaper featuring the trainspotting stripe, which is positioned in the middle section of the store.

DCA juxtaposed spaces, with a narrow wood-walled stairwell leading to and from the open spaces. Upstairs, the men’s rtw room faces a large picture window overlooking Rodeo Drive; it can be closed off to form a private VIP salon and dressing room. The middle section features the made-to-order shoe area, while the back salon carries the full range of men’s dress shoes and sneakers.

De Narp noted that while Coppola’s rtw collection amounts to only five to 10 percent of overall sales, it makes an important statement to help reestablish the brand beyond men’s shoes.

Along with Coppola, de Narp said his executive team is now complete with the hires of Claudia Cividino as ceo of the Americas; Morad Tabrizi as vice president of merchandising, and William “Billy” Daley as chief marketing officer.