French brand is ending its five-year collaboration with the designer, WWD has learned. 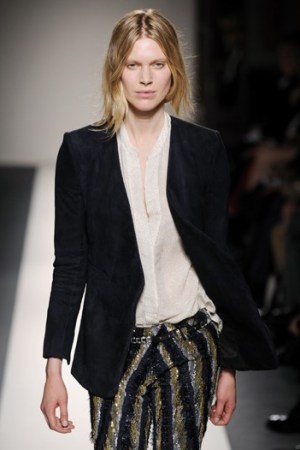 PARIS — Balmain is ending its five-year collaboration with Christophe Decarnin, the designer who heated up the French brand to the boiling point, but was missing in action during Paris Fashion Week last month, WWD has learned.

Balmain is expected to announce its separation from Decarnin as early as today, and his successor shortly thereafter.

It is understood an internal candidate is the front-runner to take up the design helm at a house Decarnin made synonymous with audacious, ultrasexy — and ultraexpensive — fashions.

The painfully shy designer was absent from Balmain’s fall 2011 show, under doctor’s orders, after seeking treatment in Paris for depression. However, sources close to the designer say speculation about Decarnin’s mental health was overblown.

In fact, tensions between the designer and Balmain’s chairman and chief executive officer Alain Hivelin had reached a breaking point, with the two men said to have widely divergent views on the company’s strategy and future direction.

Still, there has been no interruption in creating collections for the fast-growing brand, prized for its strong-shouldered jackets, artfully destroyed T-shirts, embellished minidresses and skinny jeans.

In fact, the privately held firm has continued to expand, especially in Asia. In the last six months, Balmain has teamed with local partners to open boutiques in Shanghai, Beijing and Beirut, Lebanon, along with a third location in Seoul. New units in Hangzhou, China, and Hong Kong are on the agenda for this year, and a new distribution agreement with Bluebell Japan Ltd. should see a Tokyo store bow within the next year.

Founded in 1945, Pierre Balmain has seen its fair share of turbulence in the past decade as it shuttered its couture operations, emerged from a Chapter 11 debt-protection filing and weathered a revolving door of designers in the ready-to-wear department.

Decarnin, who spent seven years as head designer of women’s rtw at Paco Rabanne, quietly joined Balmain in 2005, immediately steering the brand into hot-blooded fashion territory with thigh-skimming dresses, gauzy T-shirts and ornate embroideries, all at nosebleed prices that did not prevent sellouts and waiting lists at many stores, from Harvey Nichols in London to Kirna Zabête in New York.

In 2008, at the height of what some dubbed “Balmania,” Decarnin extended his domain into men’s wear, turning out ripped jeans and tough leather blousons.

In a rare interview last year as he unveiled Balmain’s revamped original flagship on the Rue François 1er here, Hivelin cited sales growth in excess of 50 percent in recent years, and a desire to keep a tight rein on distribution for the top line, which boasts T-shirts retailing for $1,600, jackets for $5,000 and runway dresses for upward of $60,000.

Nevertheless, Hivelin has quietly tested future avenues of growth for the brand, including a less expensive line dubbed Balmain Blue that is said to have irked Decarnin and was never brought to market.

As reported, sources said this week Ittierre SpA may have secured a license with Balmain, but the French firm and the Italian manufacturer have been mum on the subject. At present, Ittierre produces the C’N’C Costume National, Galliano, Ermanno Ermanno Scervino and Just Cavalli collections, and is said to be keen to expand its stable of international fashion labels.