The 2,150-square-foot unit at 100 Wooster Street in New York is to showcase the French firm’s complete product universe.

By Miles Socha
with contributions from Sharon Edelson
on April 4, 2016
View Slideshow 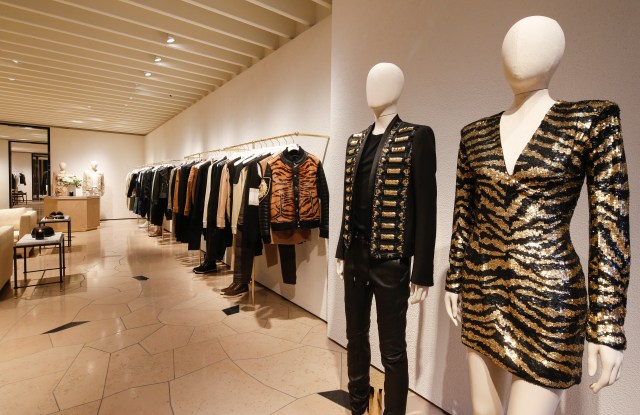 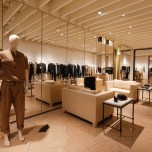 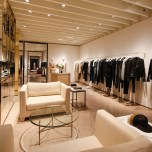 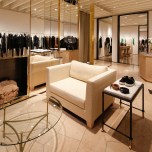 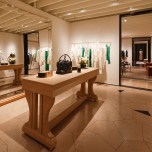 PARIS — Seizing on its momentum in the fizzy U.S. market, Balmain on Monday opened its first freestanding store in America, planting a 2,150-square-foot unit at 100 Wooster Street in New York’s SoHo district.

The location, just around the corner from Chanel, telegraphs its status as a “destination” brand with an edge, and reflects the preferred neighborhood of Balmain’s popular creative director Olivier Rousteing, according to Emmanuel Diemoz, chief executive officer of the French fashion house.

Rousteing noted he’s attracted to the “amazing mix of energy, creativity and beauty that you find in downtown Manhattan.” He plans to fete the unit with a party on May 2 after the Met Ball.

Diemoz said he expects the retail showcase to further elevate Balmain’s global profile, given strong tourist flows, though the aim is “to seduce the American customer” by offering a more complete range of products than in U.S. wholesale channels.

The executive declined to give sales projections, but as a comparison, its 2,350-square-foot London boutique on South Audley Street was expected to generate first-year sales of about $2.3 million to $3.4 million.

Diemoz also skirted questions about the “for sale” mandate given to Bucéphale Finance, a boutique mergers and investment firm in Paris founded by Jean Marc Forneri, who is also a director of Balmain SA and a shareholder in the fashion house.

It is understood bids are due this month. Sources suggested Spanish fashion and beauty firm Puig and private equity fund Eurazeo have looked at the dossier, while French financial daily Les Echos reported that interested parties also include Valentino parent Mayhoola for Investment, along with unidentified American and Chinese contenders.

Addressing the store, Diemoz said the decor is deliberately understated as “the product we are creating is naturally expressive.”

For the task, Balmain enlisted architects Olivier Marty and Karl Fournier of Studio KO, which riffed on founder Pierre Balmain’s midcentury vacation home on the Italian island of Elba, rendering the project “more architectural than retail and decorative.”

The Manhattan outpost is designed as a series of four rooms that echo the residential feel of Balmain’s Paris and London flagships. The store features the brand’s women’s and men’s collections, plus footwear, accessories and the new Balmain kids range, slated for arrival in June and exclusive to the Wooster Street location in America.

There are nods to the Paris flagship in the generous use of mirrors, gold and brass set amidst clean, white rooms. A room lined in smoked mirrors in the center of the store is dedicated to “the transaction.” Clients sit at a large table upon which sits a dense arrangement of roses. “We don’t want customers to feel like they’re here to buy,” said Eleonore Bonneau, retail manager of Balmain. “We know where the prices are — we’re at the high end.”

References to midcentury architecture include thick plaster walls in the style of Oscar Niemeyer and Luis Barragán; and white ceiling beams recalling Philip Johnson. Floors of broken pieces of beige marble with black shards had to be put together like a puzzle, while reproductions of 20th-century French furniture designs and a replica of a classic Greek goddess, picked up at a flea market in Paris, are among other design elements.

Women’s styles are color-coded black and white, red, green and pastel. Items include a Perfecto suede jacket for $5,210, suede jogging pants, $4,405, and a red silk halter decorated with starfish rhinestones priced at $3,596.

The new store has a VIP dressing room area for any who want added privacy. “We’ll do a lot of home deliveries,” Bonneau said. “We can close the store for VIPs.”

Balmain has tracked rapid growth in America recently through its 40-odd wholesale doors, which include department stores Barneys, Saks, Bergdorf’s, Neiman Marcus and specialty retailers such as Maxfield and The Webster.

According to Diemoz, the U.S. represented 9 percent of Balmain’s business only two years ago versus 18 percent today. It’s a figure he thinks he can stretch to 25 percent to 26 percent, acknowledging that Rousteing’s tight clutch of celebrity friends, headlined by the Kardashian clan, has fanned his fame in America. The designer boasts 2.8 million followers on Instagram.

Balmain’s one-off collection for H&M, which sold out rapidly last November, also brought the brand “tremendous visibility upon which we want to capitalize,” Diemoz said.

Although there are no immediate plans to open more boutiques in the U.S., he said Los Angeles would likely be the next priority, and he is studying that market.

Europe accounts for 50 percent of Balmain’s business, Asia 25 percent and the rest of the world 7 percent.

Balmain has 17 directly owned stores, concentrated in China as well as in Tokyo, Seoul, Hong Kong and Dubai.

Diemoz noted the brand is “resonating worldwide” and the company has been tracking an average of 25 percent sales growth the last three years.

Question marks about Balmain’s future ownership have hung over the house since December 2014 when Alain Hivelin, the company’s majority owner and the architect of its recent global expansion, died at age 71. Majority ownership passed to a family holding company, and it is understood Hivelin’s principal heirs, his wife and three daughters, are not involved in the fashion business.

According to sources, several members of Balmain’s management board also own stakes, and not all of them want to sell their shares as they pilot the company through a profitable expansion phase. Besides Diemoz, other key members of management include Jean-François Dehecq, chairman.

Balmain’s niche positioning — with its showy and sexy ready-to-wear commanding nosebleed prices — and its extensive licensing could prove barriers to attracting interest from Europe’s big luxury groups. It is understood LVMH Moët Hennessy Louis Vuitton kicked the tires, but is unlikely to lodge a bid. However, cash-flush private equity funds would be attracted to this trophy asset, as storied French couture houses are rare.

Pierre Balmain founded his Paris house in 1945 after design stints at Molyneux and Lucien Lelong, and became known for wearable, elegant clothes: safe and classic for day; extravagant for evening.

The brand is seen having strong potential to expand its retail footprint, and capitalize on the buzz around it, fanned by Rousteing.