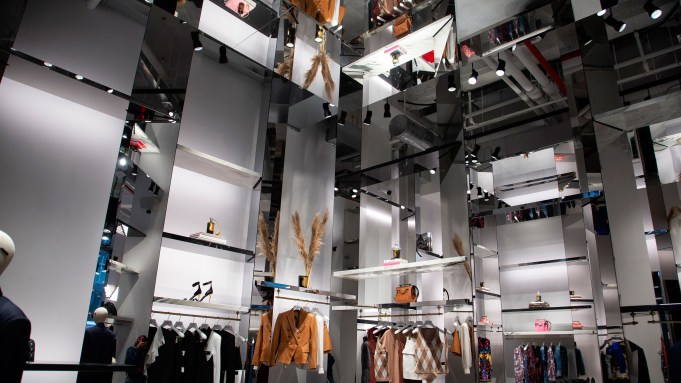 In a full-circle moment for the French fashion house, Balmain has opened a Madison Avenue flagship some 50 years after founder Pierre Balmain first hung out his shingle on the famous shopping street.

It arrives along with a range of accessories in a monogram that Olivier Rousteing, Balmain’s current creative director, unearthed from the archives from that era and is eager to introduce to Millennials and Gen Z. He’s been flaunting it on Instagram and TikTok and greeted a visitor to his Paris office wearing a face mask bearing the interlocking Ps and Bs.

“Without knowing the past, we can’t understand the future or the present. In New York, in America, they love this sense of heritage,” Rousteing said in his first joint interview with chief executive officer Jean-Jacques Guével, who joined last February from Zadig & Voltaire, just in time to finalize Balmain’s second-largest store in the world. It spans 3,500 square feet across a single floor.

Rousteing allowed that Balmain is widely known for its links to pop culture — he frequently dresses the likes of Beyoncé, Kim Kardashian and Neymar — but probably less for being one of the oldest French fashion brands with a global resonance. It was founded in 1945, which means it’s 75 years old this year.

The monogram dates from the early Seventies, when it covered couture coats, ready-to-wear blouses, shoulder bags, luggage — and even the carpet in Pierre Balmain’s original Madison Avenue boutique.

The new flagship at No. 650 blends the grandeur of a Parisian town house — the main template for Balmain boutiques — with the airy feel of a Manhattan one and the cool of an uptown art gallery. Gleaming metallic surfaces in gold and silver, a key decor element elsewhere, have been brushed to accentuate more of a raw feeling, Rousteing noted.

The front of the store is dominated by an all-black gallery space that serves as “a transition between the street and the selling area,” according to Balmain, and it will house artworks and the brand’s latest campaigns, collaborations and collections. A series of selling areas unfurl for various categories of products.

“It’s the last flagship we have missing in our retail footprint,” said Guével, a warm, eloquent executive who has also worked at Céline, LVMH Moët Hennessy Louis Vuitton’s fashion division as well as at brands including S.T. Dupont and Louis Vuitton.

He allowed that the retail environment in New York is hardly auspicious today, with anemic foot traffic on Madison, few tourists and numerous economic headwinds in the wake of the coronavirus crisis. Balmain will initially focus on serving and cultivating its local clientele.

The brand had opened a 2,150-square-foot boutique at 100 Wooster Street in SoHo in 2016, and that unit will go dark in October given the arrival of the flagship.

Yet Guével stressed the importance of the U.S. market, Balmain’s second largest after Europe, accounting for between 25 and 30 percent of revenues. (He declined to discuss precise figures at the fashion house, which is owned by Qatar-based group Mayhoola for Investments.)

He also voiced confidence in New York, still one of the top luxury shopping cities in the world.

“Tourism will be back at one point,” he said. “The whole thing about Balmain is that although we are super-high-fashion and energetic and everything, we have a long-term vision about the brand and this comes from me, from Olivier and from our owners.

“Madison will be a store at the level of design, of excellence, that New York deserves,” he added.

Guével noted that business in America is recovering quickly since July in its own retail. “We had a very good month of August, and September is good, so it shows that we have a very loyal base of customers,” he said, noting that America harbors Balmain’s largest number of VICs.

While declining to give ratios, he characterized Balmain as a wholesale-driven company that is focusing on improving the retail experience wherever it happens, including the digital channel, which is advancing at a triple-digit rate on its own e-store, “by far” its biggest door.

“We believe that what matters is the quality of experience, whether it’s on digital, at retail or wholesale,” he said. “Retail is of course a key part. We have a great concept, we have great music, we have a great sales staff and service, and we don’t believe retail is dead. We just think it really has to be excellent.”

“One of the challenges of the industry is to come to the customers with a stronger, qualitative, creative, energetic digital experience, much more than it is now, so we’re working on this,” he said, noting that most investments are being plowed into the online channel.

Guével said he spies lots of opportunities for Balmain in America, as it targets Millennial customers with more accessibly priced products, leveraging Rousteing’s enormous popularity on social media, with 6.2 million followers on Instagram for his personal account, and 10.5 million for Balmain.

“We can open the door to our product, and not only our image,” he said.

The 1945 line, which spans four handbags in soft leather and jacquards, is the latest volley, unveiled alongside the cruise collection last June and now arriving at Madison, select Balmain stores and its e-store.

Rousteing noted that “what’s important today is being spontaneous,” also hinting at a project around masks. “During the lockdown, I realized the importance of heritage, and of savoir-faire.”

Hence, a chance for Millennials and others to discover a piece of Balmain’s history with the 1945 line.

“I think it’s really important to base a brand not only about a trend or a fashion show, or what the press is gonna say, but actually having a really strong heritage and say that no matter what happens tomorrow, you will be still proud to have that bag, that story in your wardrobe,” he said.

Rousteing said he looks at sales reports daily, and the information helps guide his designs.

“You cannot create without knowing what your clients want and what works at retail,” he said, citing equal surprise at knowing $20,000 embroidered dresses are blowing out and that stores require reorders of hoodies.