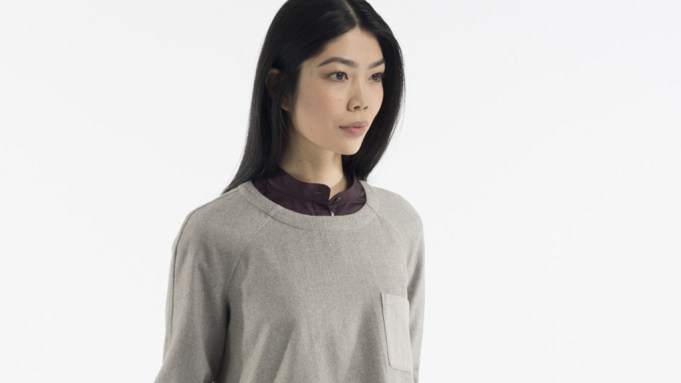 LONDON — Bamford, the British label founded in 2006 by Carole, Lady Bamford, is carving out a bigger presence in the luxury arena for fall.

Bamford’s designs will launch at Liberty, and the brand is also wholesaling its fall collection at Paris’ Hotel Castille from Sunday through March 4.

A revamped Web site was launched earlier this month, and carries a wide selection of the brand’s luxe designs in natural fabrics.

The move back into wholesale comes after a major restructuring in 2009. Before then, the label was known as Bamford & Sons, and its men’s, women’s and accessories collections were carried at stores including Bergdorf Goodman, Barneys New York, Harrods and the brand’s own stand-alone units in London, which have since shut.

Now it’s known simply as Bamford, and Carole Bamford — who is married to Sir Anthony Bamford, chairman of Britain’s JCB construction equipment firm — has once again put a focus on creating a women’s collection in natural fabrics.

Alongside Liberty, the line will sell at stores such as Takashimaya and Isetan in Japan, and at 10 Corso Como in Korea. The collection will also be carried at Bamford’s London store in Chelsea, its Bamford Barn retreat in Gloucestershire and its Haybarn Spa at London’s Berkeley Hotel.

As of last month, the firm also has a new managing director, James Greenfield. Prior to joining Bamford, Greenfield served as managing partner at Paper Rain Group, the company behind the labels Damir Doma and Cote & Ciel. Before that, he was managing director at Kenzo from 2005 through 2010, and had served as senior vice president of the men’s division at Givenchy, also part of LVMH Moët Hennessy Louis Vuitton.

For fall, the Bamford collection takes its cues from the English countryside, and spotlights fabrics such as double-face cashmere, lambskin and suede along with cashmere, angora and alpaca. There are pieces such as an alpaca coat with a herringbone pattern in deep red, a double-face cashmere tunic dress with chocolate and navy color blocks and cocooning wool ponchos in a chunky herringbone knit.

“It’s all about the touch — how does it feel against your skin?” said Karen Leck, range director of Bamford, during a walk-through of the collection.

She noted that Bamford’s fine knit pieces, such as its ultrafine-gauge cashmere and silk Button Cuff Sweater, are made at workshops that create as few seams as possible, so the inside of the garment feels comfortable against the skin.

The 60-piece collection is manufactured largely in the U.K. and Italy. “We work with people with the same principles as Bamford,” said Leck, who noted that much of Bamford’s knitwear is manufactured in Scotland and its woven fabrics in Italy. “They are workshops rather than factories, often run by families. It’s all about relationships, and [making designs] that are not disposable.”

Leck said the design process is an “emotional” one, and influenced by Carole Bamford’s style and travels. “The collection isn’t too formal,” said Leck. “It’s classic with a twist, with an English edge to it.”