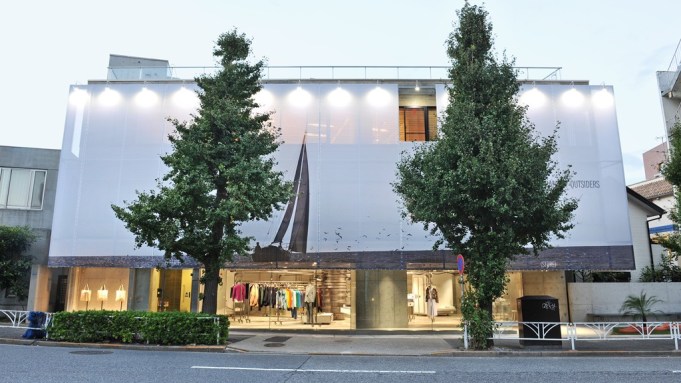 TOKYO — Band of Outsiders is opening its first store here Saturday, capping off a week of activity for American fashion brands in the Japanese capital.

The 1,768-square-foot store is located on the ground floor of a new three-level building. Opened through the brand’s distribution partner, Sazaby League, the complex is a few doors down from the Ron Herman flagship, another Sazaby property. The upper two floors of the new building house a Sazaby showroom and offices.

The Band of Outsiders store comes on the heels of Alexander Wang opening its flagship in Aoyama last Saturday. J Brand chief executive officer and founder Jeff Rudes is in town to promote the brand’s new Osaka store that opened Wednesday. Meanwhile, Rag & Bone designers David Neville and Marcus Wainwright put in an appearance at Isetan on Wednesday to launch a one-week pop-up store there.

Architectural studio Lot-Ek designed the Tokyo outpost for L.A.-based Band of Outsiders. It’s most prominent characteristic is a large steel mechanism with 28 arms extending outwards to anchor the store’s display cases, clothing racks, dress forms and cash register. The arms of the apparatus can be reconfigured to change the look and layout of the store.

Scott Sternberg, founder and creative director of Band of Outsiders, said he was eager to create a store with a unique, modular design.

“The approach with the architects was really about sort of deleting all those things off the menu from like typical fixturing and shelves and layout and thinking about this sort of big structure we called ‘the monster’ as we were building it,” he said.

Similarly, the exterior of the building can be manipulated to change each season, as it is covered in a printable mesh fabric. A massive image of a sailboat on the open sea, created by L.A.-based artist Friedrich Kunath, graces the storefront for the opening.

The artist also loaned the store a sculpture of a pair of gigantic penny loafers cast in resin with a palm tree planted in one as a companion piece to the mural.

The store carries the brand’s men’s and women’s collections as well as a range of collaboration products, such as shoes made with Vans Japan and penny loafers made with Maine-based Rancourt and Co.

Sternberg said the brand has had a wholesale presence in Japan for about nine years and retailers like United Arrows and Beams picked up Band of Outsiders relatively soon after he launched the collection 10 years ago. Although the brand has had a men’s shop-in-shop in Beams for several years, the distribution of its women’s line has been more scattered, Sternberg said, adding that the new flagship aims to send a strong message to female consumers.

“I think this is a real opportunity for us to show who we are,” he said.