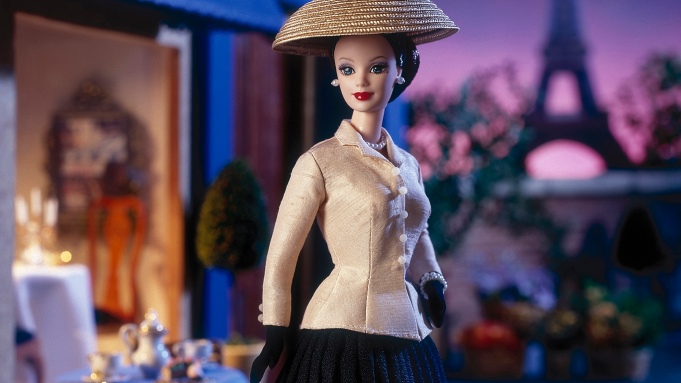 ALL DOLLED UP: Barbie is capping off Paris Fashion Week with her own exhibition.

The doll is the subject of a sprawling show simply named “Barbie” at Les Arts Décoratifs in Paris, which opens on Thursday.

The 16,150-square-foot show includes some 700 dolls, scale models, videos, art pieces and fashion treasures from the museum’s collection, including from Carven, Thierry Mugler and Chanel, plus loans from Maison Margiela, Jeremy Scott and the Fondation Pierre Bergé-Yves Saint Laurent. (Saint Laurent himself had created a doll for BillyBoy’s Nouveau Théâtre de la Mode sponsored by Mattel, Barbie’s maker, in the Eighties.)

“The doll was conceived as a fashion toy, not to play mother with or cuddle with, but to be dressed and undressed,” explained Anne Monier, curator of the museum’s toy department during a walk-through of the show that was still under works. “When Ruth Handler created Barbie in 1959, she had the full wardrobe in mind. The doll itself isn’t very expensive, so that girls can get the clothes, accessories, shoes, handbags, etcetera.”

“We looked at Barbie and fashion through different lenses — Barbie’s adoration for fashion, the collaborations between designers and Barbie and finally, how Barbie has inspired designers. The circle is complete,” Monier said.

She worked with Les Arts Décoratif’s chief fashion and textiles curator Pamela Golbin on one display comparing Barbie outfits over a span of 50 years to fashion pieces in the museum’s collection.

“Parisian couture inspired fashion worldwide. As Barbie was a miniature of the ideal [woman, her wardrobe] necessarily took inspiration from Paris,” said Golbin. “It’s not an exact copy. But the spirit, fabric, color — everything is there to give the impression that it’s Parisian couture.”

The exhibit sheds the light on the more than 150 professions the doll has represented over the years, including fashion photographer, fashion editor, computer engineer and U.S. presidential candidate. One doll dating back to 1992 even bears an odd resemblance to Hillary Clinton.

A room is dedicated to what goes on behind the scenes during Barbie photo shoots. Resulting images are used for several purposes, including the Barbie Style Instagram account that has more than 1.3 million followers.

Setting up a scale model, Lars Auvinen, Mattel set designer, said: “This was from our Italian-themed series.”

Flipping through the posters that will also be part of the exhibit, he said: “This was our Richard Avedon-like shoot and this one is from our Russian series.”

Another poster was from the series featuring Barbie with Christian Louboutin, who was tapped to be Barbie’s godfather for 2009, the year she turned 50. The luxury footwear designer and doll are shown exploring his favorite things. “We shot him on white and stripped him [into the images],” Auvinen explained.

Video interviews of the Mattel team are part of the exhibition, too.

There’s a room dedicated to how Barbie has mirrored pop culture, including dolls inspired by “The Hunger Games,” “Mad Men” and even Kate Middleton and Prince William’s royal wedding.

However, the main fashion highlight comes as the grand finale that includes a moving fashion show. Here, dolls are either wearing clothing created with the likes of Oscar de la Renta, Dior, Diane von Furstenberg, Moschino or Sophia Webster and mass-produced by Mattel or unique creations conceived by designers including Jean Paul Gaultier, Sonia Rykiel, Paco Rabanne and Christian Lacroix.

Four recesses in a wall are dedicated to some other facets of the Louboutin collaboration with Barbie, including a pair of signed striking pink shoes.

The doll’s impact on designers is also shown, as seen in looks from Jeremy Scott’s spring 2015 collection for Moschino and pieces from Maison Margiela in 1994, when the label played on proportions in line with Barbie’s.

“Barbie,” which will be held in the same part of the museum as other fashion exhibits, including “Dries Van Noten: Inspirations,” runs through Sept. 18.

Meanwhile, “Barbie — The Icon,” an exhibition about the history of Barbie in Milan’s new Museo delle Culture winds down on March 13.