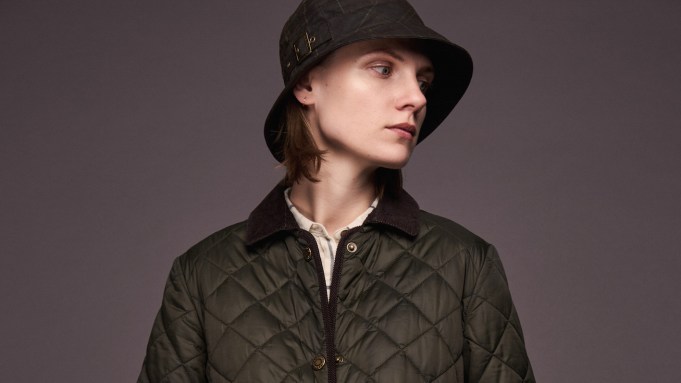 LONDON — Barbour is putting a tailored, fashion spin on its classic outerwear for women — including the waxed jackets — with a collection that’s set to land at stores including Bloomingdale’s on Sept. 1.

Coats and jackets are fitted around the shoulders, and some have A-line shapes and cuff sleeves. The new styles are also meant for layering, with lightweight moleskin linings. Some coats have detachable faux fur collars.

Among the pieces to get a makeover is the classic Bedale wax jacket, which — in addition to having more fitted shoulders and an A-line shape — features cropped sleeves and a neater, smaller collar than its counterpart in the mainline women’s collection. It also has a chunky zipper and stud details.

“Our muse was Françoise Hardy,” said Ian Bergin, director of men’s wear and accessories, referring to the French singer, songwriter and actress during her Sixties heyday. “We’re spinning these pieces into modern ones for the consumer.”

Bergin and his men’s wear team worked on the new women’s capsule collections, and he said the goal was to create simple, effortless outerwear that was simultaneously flattering, serviceable and practical. The roots of Barbour’s women’s wear are in men’s wear, so the company said it made sense for the men’s design team to work on the two new outings, known as Rain Drop and Snow Drop.

Rain Drop will land in-store on Sept. 1, and Snow Drop will arrive later in the autumn. Prices are higher than the Barbour mainline collection, with a wax jacket costing 449 pounds, or $593, or about 100 pounds, or $132, more than its mainline counterpart.

Other layering pieces in the new capsules include a shirt jacket, wool knits — including one with a Navajo-style pattern — shirts with umbrella and raindrop prints and gray marl crew neck sweaters.

There are also beanies and oversize scarves in Barbour’s exclusive tartan pattern, boots, brogues and a waxed tote.

Although he would not give U.S. revenue figures, Hooven said the Barbour business had been notching double-digit increases between 2010 and 2015, when growth began to slow due to the warmer weather, although Barbour continues to perform well.

The U.S. is Barbour’s second-largest market after the U.K., and Hooven said his customers tend to skew younger than their British counterparts, with the brand appealing to the college campus crowd who don their Barbour jackets for football games and tailgates.

Barbour, which is aiming to have a full lifestyle offer, operates a shop-in-shop at Macy’s Herald Square, and also sells its main collections through Bloomingdale’s, Saks Fifth Avenue, Nordstrom and Lord & Taylor.

The company also has 15 stand-alone stores in the U.S., three of which are outlets. There are no plans to increase that number. Hooven said the company will expand its shops-in-shop.

The women’s capsule collections will sell at Barbour’s own-brand stores, online and across 30 U.K. retailers. In Italy, it will be stocked at 10 Corso Como. It will also be sold in other European countries.

Bergin said his team is already at work on the spring 2017 women’s capsule collections, which will include riffs on a fishing and wading jacket from the Barbour archive tailored for a contemporary customer.

Barbour has certainly been working its archive hard as it seeks to appeal to new customers. In June, during London Collections: Men, the brand unveiled a collaboration with Selfridges, having worked with the store’s buyers on updating and adapting six archive pieces including the Durham, Ursula and Mackinaw jackets for men.

Family-owned and operated for the past five generations, beloved of Queen Elizabeth and her clan, Barbour has been making performance outerwear for the past 122 years.