The country is the largest manufacturer of bridal wear in Europe and the second-largest in the world after China.

By Barbara Barker on May 3, 2016
View Slideshow 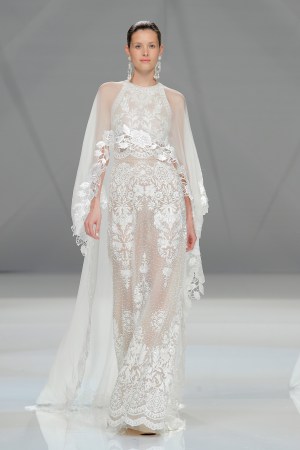 BARCELONA — Spain may be suffering from a five-month-old political impasse but the economy is on the upswing and its bridal sector remains one of the world’s strongest.

The country is the largest manufacturer of bridalwear in Europe and the second-largest in the world after China. Spain’s domestic production of wedding gowns only totaled 755,000 units in 2014, the latest data available, for an annual turnover of 124 million euros, or $142 million at current exchange. Exports made up 40.7 percent of that figure, noted a report by Barcelona-based business school IESE. With an annual growth rate of 12.9 percent, total bridal-related shipments, including wedding and special occasion dresses, men’s wear and accessories, tripled in value from 2007 to 2014 to 876 million euros, or $1 billion.

The strongest markets remain Italy, Germany, France and the U.K., with the U.S. also important. Latin America and Asia are growing markets, confirmed Estermaria Laruccia, director of Barcelona Bridal Fashion Week, which was held April 26 to May 1 in the downtown Montjuïc fairgrounds.

There are traditionally two parts to bridal week: Designer runway shows, with 21 this year, or two less than in 2015, running in tandem with the trade fair, made up of 260 vendors, a 13 percent increase over the previous season, from 17 countries.

“This is not just a contacts show; everybody is taking orders. The most important element is fashion in capital letters,” Laruccia emphasized. “We are a fashion event with glamor and business and that mix is where we put our energies. The Made-in-Spain image has a lot of potential and with bridal week we’re trying to make [that image] flourish. Each year we’re one step ahead. For instance, in this edition, 58 percent of vendor participation is from abroad; roughly 650 key international retailers from 40 countries are expected to attend with upwards of 18,000 visitors, or a 12 percent hike over last year,” she predicted. “Ours is an ambitious expansion plan but the numbers bear us out.”

New York-based Naeem Khan, bridal week’s second-ever guest designer — last year’s Katharine Polk, owner/designer of Houghton, was the first — created a stir with his lavish designs. The designer sent out color (blue, lavender, pink) and closed the Barcelona show with a series in gold, a gazar A-line gown with a peplum bodice and a long-sleeved number with a circle skirt. He took his bow with a bride dressed entirely in black.

Backstage, he said, “The energy out there gave me goose bumps,” adding, “Spain has an important place on the world’s bridal stage, which is why we’re here.”

Additional runway standouts were YolanCris’ contemporary brand of boho folk in long and short dresses with Seventies references; a plethora of mix and match layers, tiers and pleats; feathers; cowboy fringe, and hand-embroidered florals on Chantilly lace and pure-white sheer silk tulle. The Barcelona-based label shows in New York and has 14 points of distribution in 13 U.S. states, confirmed Cristina Perez, one-half of the YolanCris sister team.