The monthlong event includes a capsule collection, made-to-measure offerings for both men and women, personalization options, a short film and engages customers with interactive touches. 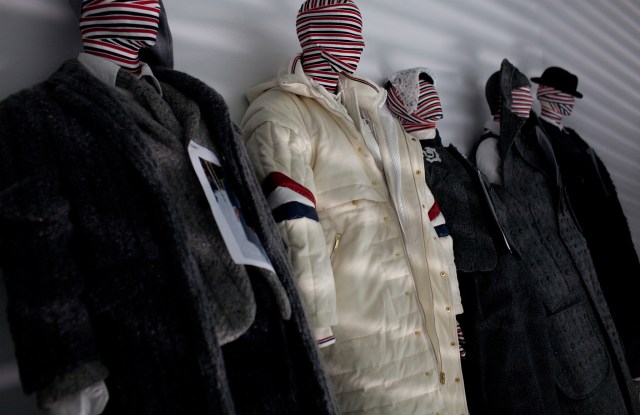 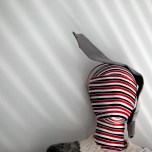 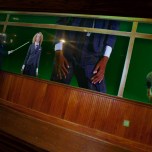 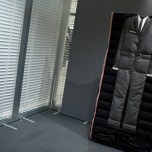 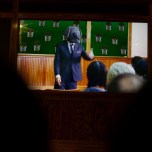 NEW YORK – Thom Browne is having a really good week. On the heels of this week’s announcement of Ermenegildo Zegna Group’s acquisition of an 85 percent stake in Browne’s brand, as reported in WWD, Barneys New York and the designer are partnering on an in-store experiential concept, launching Sept. 5 in the lead-up to New York Fashion Week.

Browne may have decamped to Paris for his runway shows but he considers himself a U.S.- based designer. What’s next on the menu? He’s bringing more flavor to the city in the form of “the Thom Browne burger.” With a special sauce developed by Barney’s Downtown executive chef Jennifer Wasnesky, the burger will sell at Fred’s at Barneys Downtown.

“For me, I wanted to do something truly American and I think as soon as people eat it, they will know exactly what I mean,” Browne said.  It’s served with red, white and blue condiments, representing Browne’s grosgrain ribbon detail, and fries. The meal, taste-tested by Browne, was meant to mimic a fast food burger one might get anywhere in the States. Think Allentown, Pa., where the designer grew up.  And the burger is just one part of a larger partnership experience.

“We’ve been talking since March and honestly we wanted to work with Thom a long time. Seeing what he does in Paris and what we do with his collection in-store, we wanted to tell a bigger narrative. And how do we do that and create our own experience,” Matthew Mazzucca, creative director of Barneys New York, said. Mazzucca’s team collaborated with the designer and Browne’s input is stamped on every aspect of the activation.

“The great thing about working with Barneys was that they present conceptual and interesting ideas for everything they approach — so it was a very inspirational collaboration,” Browne said.

The monthlong event includes an exclusive capsule collection; made-to-measure offerings for both men and women; personalization options, and prime window real estate at Barneys’ Madison Avenue flagship in Manhattan. But the heart of partnership is a short film titled “Anatomy of a Suit.”

The film, directed by Michael Hauptman and styled by Sasha Kelly, depicts education through Browne’s subversive eye. In it, a dog-headed anatomy professor — the same dog head found in the finale of his women’s collection for fall  2018 — teaches a diverse and rowdy group of Thom Browne-clad students about the composition of the suit.

Mazzucca said some of the things discussed in the planning were Eighties classic films like “Chariots of Fire” and “Fast Times at Ridgemont High,” and Browne approved.

“It all begins with the gray suit. And then everything in the experience leans into the film,”  Mazzucca explained.

The film uses pieces from Browne’s archive mixed with selects from the retailer’s in-store capsule collection to dress the students and teacher. Browne’s dachshund Hector even makes an appearance dancing on a green chalkboard as the students complain that the “dog ate their homework.” Stadium seats were painted black and upholstered in gray fleece fabric as the movie plays on a mantle done in dark wood, simulating the hallowed halls of Barnard, where the film was made.

The majority of the event lives on the fourth floor of the retailer and the film screening is juxtaposed between the men’s and women’s made-to-measure programs. The made-to-measure partnership is a first for the retailer and Browne’s offerings include full suit ensembles as well as jacket and trouser separates with customizable labels sewn in. For women, there are 50 exclusive fabrics from which to choose. Thom Browne expert tailors will be there to walk customers through the process.

“The capsule collection represents the tailored world mixed with the sportswear world and vice versa, which is exactly what I represent,” Browne said. “I never separate the two.”

Opposite the screening are interactive features to engage customers.  An installation, also with stadium seating, invites guests to take hands-free selfies, one on one or in a group, with or without a dog head prop. On the men’s side of the floor, inspired by the suit sleeping-bag cots in Browne’s fall 2018 runway show, Mazzucca’s team created a vertical version of the cot with embroidered suit to take pictures in.

“We wanted things to be seen, touched, no preciousness at all,” Mazzucca said.

The prime real estate of the Madison Avenue windows that flank the front doors of the store use custom-made, metal slat-covered blinds, like the meticulously planned out mid-century office style interiors found in the designer’s stores, complete with fluorescent tube lighting.

“That is the best part of the architecture of the Madison store — we can make a large, loud statement,” Mazzuca said.

And a statement it is: Outside viewers see the massive windows drenched in fluorescent light, a Thom Browne label above the door. Just inside at the landing, guests will be greeted with the red-, white- and blue-ribboned faces of Browne’s works complete with gray shirting, topcoats made from deconstructed suits, and bowler hats. Through the glass door, the Thom Browne coed army peeks out, inviting viewers to come in and see Browne’s America, with a Barneys twist.

The collaborative in-store experience will run from Sept. 5 to Sept. 30 at the Madison Avenue store.