The former French Vogue editor in chief will serve as guest editor and stylist — as well as muse and inspiration — for fall. 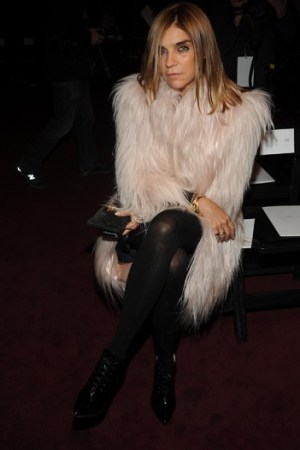 NEW YORK — Carine Roitfeld’s next move has been one of the most anticipated in fashion, and now, at least for fall, the guessing game is over.

Barneys New York has tapped Roitfeld for a multifaceted initiative that has the former French Vogue editor in chief serving as guest editor and stylist — as well as muse and inspiration — for fall, collaborating with photographer Mario Sorrenti and Barneys creative director Dennis Freedman.

Roitfeld will not only style and edit Barneys’ Sorrenti-shot advertising campaign, catalogue and fall mailers; she will put her stylist’s touch on the store’s famous Madison Avenue windows, which will be unveiled in September.

“It’s very exciting,” Roitfeld told WWD in an exclusive interview from Paris. “It’s a new kind of project for me. It’s good to have a new life, because now I can do projects that I never dreamed of before.”

And Barneys fit that bill for her. “For me, Barneys has always been the biggest name in luxury department stores, so to be able to participate in this project with them, and be visible during the next fashion week in New York, is my dream come true,” she said. “To a French girl, it’s a big, big dream.”

Roitfeld, who is also finishing a book with Rizzoli about her and her work as a stylist, is likely to spend more time in Gotham over the next few months. “I am very happy about that,” she said. “New York is my dream city, and part of my family is in New York.”

Freedman said the idea came up during a conversation with Mark Lee, Barneys’ chief executive officer, after Roitfeld revealed she would be leaving French Vogue.

“We had a discussion about how extraordinary she is and the possibility that we might do something together,” Freedman said. “In building this collaborative team, I thought Mario was going to play a very important part as the photographer and filmmaker, and I knew he had a very close personal as well as professional relationship with Carine, which was very important for this project.”

Freedman explained that the campaign will not just be styled and edited by Roitfeld but will reflect “the woman that she is and her personal style, which we feel is the perfect reflection of our customer. She is the ideal muse as well as editor. She has a unique and extraordinary personal style. She appeals to all ages. She is independent and strong, and yet she is completely feminine. She is a woman of the world, which we like to think our customer is, as well.”

With her stick-straight hair falling into her chiseled face, smoky eyes, penchant for all-black ensembles and cool Parisian attitude, Roitfeld is an inspiration to designers and a favorite of street-style bloggers dissecting her look, from the towering heels she wears to the Carine hair.

Roitfeld first made her mark in fashion in the Nineties as Tom Ford’s muse and stylist at Gucci. Later, she brought her unique style to French Vogue, where she served as editor in chief for a decade, but left earlier this year amid speculation that the magazine had become too edgy and that some companies had complained she was styling for other brands while serving as editor. It is an allegation Roitfeld has denied.

Controversy, however, is hot currency in fashion, and the buzz surrounding Roitfeld and her time at the magazine hasn’t subsided since she left Condé Nast. On the contrary, speculation about her next move has been rampant, with rumors ranging from Roitfeld consulting for Tom Ford on his new women’s line to her spearheading the launch of a French edition of Harper’s Bazaar. Then there has been some chatter she was teaming with Hedi Slimane at either Yves Saint Laurent or Givenchy, if current creative director Riccardo Tisci were to succeed John Galliano at Dior.

“Each day it’s changing,” Roitfeld said of the rumors. “One day I am going to Dior with Riccardo Tisci, the next day I am going to Saint Laurent with Hedi Slimane. I don’t think it’s very nice for the designer at Saint Laurent, and it’s just rumors. What I know is that I now have my freedom and I will keep my freedom forever. I am very excited to have this freedom and to have projects like the one at Barneys.”

Roitfeld will pick and style the looks that go into the catalogue and mailers.

In addition to the Barneys’ advertising visuals, Sorrenti, who worked with Roitfeld extensively at French Vogue, will create a short film, allowing the retailer’s customers a more personal view of her, from her views on fashion and style to her world at large.

“I am hoping to capture something very personal, a portrait of her in a way,” Sorrenti said. “When Carine and I are together, it’s fun, and she is really cool and really herself, and it’s that intimacy that I want to capture. She has a great sense of humor, and she is very provocative and very free in the way that she doesn’t plan about who she is and what she is going to say. She is very natural, which is great.”

Sorrenti’s campaign and film will be shot in New York and Paris. It remains unclear whether Roitfeld herself will make an appearance in the advertising campaign.

Roitfeld said that she was drawn to the idea of crossing over from the editorial side — where boundaries can more easily be pushed — to retail, which is directly concerned with commerce. “To be on the other side with the retailers and buyers is new for me, and I always like new opportunities in my life,” she said.

While she admits that it’s only natural that her personal taste and style will find their way into the project, she was nonchalant about being the muse for the season. “I am very spontaneous in the way that I dress each morning, so I don’t realize if people really look at me and try to copy my shoes,” she said.

For Barneys, Roitfeld’s involvement could bring a distinct new voice to the specialty store, and even if it’s only for one season, it’s another sign of the direction the retailer is taking under Mark Lee. “Carine has established herself as one of the great fashion editors with her sophisticated vision and edgy classicism,” said Lee, who worked with Roitfeld during his years at Gucci Group. “Barneys is about a sense of surprise and discovery, and Carine is a reminder that fashion needs a sense of the unexpected.”

As for her future, Roitfeld said she relishes the newfound freedom. “I am sure that one day I will, even if it’s not my own magazine, do special stories for magazines and maybe something on the Internet. I have projects and opportunities coming on.

“The only sure thing I know is that I will keep my freedom,” she added. “I can be a muse for a designer, I can do work for some magazines, and do advertising, and maybe something like Barneys, but still keep my freedom.”