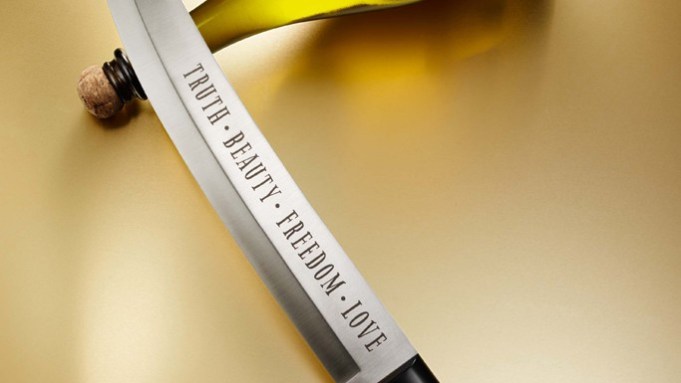 Barneys New York will be Baz Dazzled for Christmas.

That’s Baz as in Baz Luhrmann, the director of such visually lush films as “Moulin Rouge,” “Romeo + Juliet” and “The Great Gatsby.” Luhrmann and his wife, Academy Award-winning costume and set designer Catherine Martin, are collaborating with the retailer to create singular experiences using their unique visual language. The Baz Dazzled holiday program is a multiplatform initiative that will include the Madison Avenue flagship’s windows, facade, in-store displays, products, gift cards and print and digital advertising.

The Luhrmann and Martin collaboration is the latest in a series of annual Barneys’ holiday extravaganzas that have included partnerships with Jay Z, Lady Gaga and Disney.

And that’s just the crest Luhrmann and Martin created. It carries the motto, “A Life Lived in Fear Is a Life Half Lived” and will appear on shopping bags, gift cards and displays. The crest is the starting point for everything; its artwork will be brought to life in the windows.

“We’re entering a whole different world of theater film, costume design and performance,” said Dennis Freedman, Barneys’ creative director. “I hope people are going to be thrilled to see these woodland creatures come alive. We’re working on extraordinary live performances in our windows. Because Catherine is a great costume and set designer, we’re creating unique costumes for some of the performances. You’re going to enter the world of theater and film through the eyes of Barneys.” The windows will have a six-week run.

“The idea was to take traditional holiday iconography and ironically turn it on its head, to embrace the joy of the holiday season, the comfort and familiarity we find with these well-worn images, but nevertheless inject them with an inclusive, irreverent perspective that allows the audience to enter into this holiday spirit with good humor,” said Luhrmann. “The Barneys’ holiday campaign is by its nature a piece of live theater, and so for us the challenge and adventure is to create theater in a retail environment. A lot of the technique and processes are identical [to making a film] and, of course, Barneys has a very distinguished and edgy history of window display and we want to embrace that.”

“Truth. Beauty. Freedom. Love,” the credo of Luhrmann and Martin’s company, is the general theme of the windows, but Freedman said it shouldn’t be taken too literally. “All of those themes are filtered through the eye and DNA of Barneys,” he said, referring to the retailer’s wit and subversive humor.

Technology was integrated into the windows, so there will be action around the clock, including during periods when there aren’t live performances. “With the idea of the windows coming to life, we’ll have kinetic movement and change,” said Freedman. “We’re trying to do something we’ve never attempted before on this scale.”

Freedman recalled past live performances in Barneys’ windows, such as Daphne Guinness getting dressed for the Metropolitan Museum of Art’s Costume Institute gala in 2011, saying it was “a very rudimentary beginning. We’ve been able to develop that idea in new and different ways.”

To create the windows, Luhrmann said he and his wife are using “storytelling, written narrative, drawings, historical references, discussion, music, site visits, computer renderings and visualizations. These are all things that we do in order to find inspiration, but also to be able to explore the practicalities and the actualities of the windows and the interaction they will have with the audience.”

“We’re always trying to think of how windows can move forward and be something other than a set piece,” said Freedman. “They’re a way of defining who we are. When we work with Baz and Martin, we start to get into their way of thinking and they start to get into ours.”

The theme will take over the Barneys’ Madison Avenue exterior. “We’re attempting the most ambitious facade we’ve ever done,” he said. “This is going farther than anything.”

Barneys in 2011 transformed its two-story facade into a portal for Gaga’s Workshop, covering the main entrance with a larger-than-life abstract image of Lady Gaga with the entry to the main door through her mouth. When Barneys teamed with Disney in 2012, an animated short “Electric Holiday” was looped on LED tiles on the facade.

Holiday products developed for Chelsea Passage include tabletop decor, ornaments, stockings and toys. There’s also a limited-edition handcrafted Champagne sabre engraved with the credo; a backgammon set; children’s fairy princess and owl costumes, and a hand-painted tent. “They are products we are very proud of,” Freedman said. “We worked with the best vendors. The products that have the humor and playfulness, but they’re beautifully executed”.

Barneys will donate 25 percent of sales from all Baz Dazzled holiday products to Room to Read, a global organization that seeks to transform the lives of millions of children in developing countries by focusing on literacy and gender equality in education.