The one-time president of Calvin Klein and ceo of Hugo Boss America started working on the concept last year and is now fitting customers in his Nashville home. 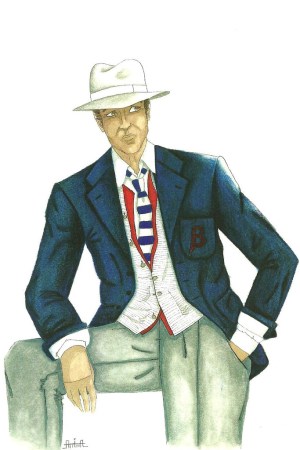 Wishnow, a men’s wear fixture in the Eighties and Nineties, has launched a bespoke men’s wear business in Nashville. The one-time president of Calvin Klein and chief executive officer of Hugo Boss America has created Bash by Barry Wishnow, which manufactures clothing, shirts, ties, hats and accessories with a “1940s glamour Hollywood” sensibility.

“My last stop after Boss was Calvin Klein, where I stayed for two years before I decided to leave,” he said. “I had become disillusioned with the industry. I’ve always been a good manager and merchant, and not a bad numbers guy, but it had become more about negotiating a deal than anything else. I just burned out.”

For a while he consulted for brands such as Donna Karan and Catherine Malandrino, and he traveled the world until finding himself in Nashville. Although he had no intention of staying, the city’s diverse population and down-to-earth culture encouraged him to put down roots. “I thought I’d wind up in Southern California, but I wound up staying,” he said.

To keep his finger in the business, Wishnow decided to “do something I enjoy, and if I make a little money, that’s an extra bonus.” Last year, he started working on the concept of Bash and is now fitting customers in his Nashville home. “I’m committed to authenticity,” he said. “There are no skinny pants or narrow lapels. It’s cool and elegant at the same time.”

He’s currently searching for a storefront in Nashville where he can create a comfortable environment for customers — a place with character. “I’d hopefully like to find a 1920s or 1930s cottage, where we’ll set up a kitchen and people can come in for a drink or a sandwich and we can do cool events.”

Wishnow said he plans to expand shortly into the women’s business as well. “Think Marlene Dietrich or Eva Gabor,” he said. “Very tailored and very sexy.”

He added: “Bespoke is happening, and I want to create something fun and educate the public about the advantages of having something made exclusively for them. I’m 66 and still pretty vital. This is my passion, and I want to share it.”