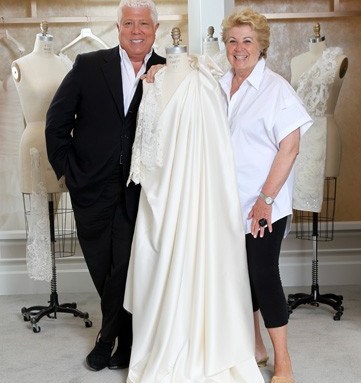 In the first of what he expects will be a major expansion plan, Dennis Basso has signed a licensing deal with Kleinfeld for his first bridal collection.

The pairing is one that goes way back. During an interview at the wedding gown emporium Wednesday, Basso and Kleinfeld co-founder Mara Urshel laughed, recalling how they first hit it off at a Parsons School of Design dinner in the Eighties. As to why they hit it off so well, Urshel mused, “I don’t know. Maybe it was the wine.”

Whatever the reason, the designer and Urshel, who was then working at Saks Fifth Avenue, became fast friends and confidantes, even vacationing together from time to time. The fashion business, of course, was the constant in their lives that drew them together.

Given their personal history it’s not surprising that this spring they will dive in with a 22-style collection under the Dennis Basso for Kleinfeld label, as opposed to a capsule collection. Geared for brides of different ages and sizes, the line has dresses with ballgown skirts and cathedral trains, simple sheaths and trumpet wedding dresses. Long an admirer of Priscilla of Boston, Pat Kerr and his “dear friend” Vera Wang, Basso said bridal has been on his to-do list for some time. “Do you know the first sketch I ever did when I was seven years old was of a wedding dress? I made the gown, the earrings, the veil with the netting — it’s framed in my office — what was that all about?” he said.

That image may very well wind up being the illustration used for invitations for the Basso bridal show that will be staged in October at Kleinfeld’s 35,000-square-foot store in the Flatiron district. The retailer plans to knock down a wall in its main salon so that a 40-foot runway can be used.

“A wedding is every girl’s red-carpet moment. To be a part of that, for me as a designer, is very exciting,” Basso said.

The core of his collection will retail from $2,500 to $4,500 with more intricate styles selling from $8,000 to $10,000. Satin, taffeta and silk charmeuse will be among the fabrics. There will also be plenty of reembroidered lace, three-dimensional appliqués and interesting beading to give the gowns greater texture.

Basso and his creations may be featured in “Say Yes to the Dress,” the TLC reality show about Kleinfeld that is in its seventh season. “The show used to be more behind-the-scenes but then we realized all people really want to see is pretty dresses,” Urshel said.

There will also be custom-made dresses offered, which is uncommon in bridal stores. Urshel, who expects Basso’s creations to drum up $5 million in first-year retail sales, noted that several of his designs would be well-suited for debutantes.

Kleinfeld is counting on an uptick in wedding dress sales now that New York has passed the same-sex marriage bill. “Many [same-sex] brides wear two wedding dresses instead of tuxes. I think women will feel more comfortable coming in to shop together. Before they would make appointments with two different consultants and then walk across the floor to see what the two dresses would look like together.”

The Basso licensing deal is a first for Kleinfeld, which has its own brands as well as an ongoing partnership with Pnina Tornai. And additional licensing deals may be added down-the-road, Urshel said.

Basso, who has three signature boutiques, said he is excited about what this deal means for his long-term business plans. “This is a big license for me. It is a big stepping stone to do other Dennis Basso licenses like fragrance, eyewear, shoes and sportswear.”

Both parties see their new union as a longtime coming. “When I met Mara I was just starting my career and she was extremely established in her career,” said Basso. “Besides liking her as a person, I really respected who she is in the fashion industry.”