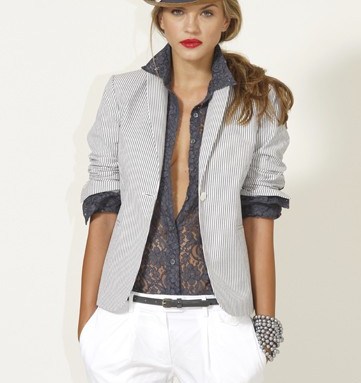 NEW YORK — What do Gant and Marilyn Monroe have in common? Designer Michael Bastian was thinking of the screen siren and the geeky men in her life when he came up with his first women’s collection, which is for Gant.

There were the obvious examples, such as Joe DiMaggio and Arthur Miller, but Bastian dug deeper and found a well of inspiration in “Niagara,” Henry Hathaway’s 1953 film noir classic that starred Monroe. While working on the campaign for the men’s line, Bastian wondered just how the female counterpart to this man would dress, and when Gant executives encouraged him to add a few women’s looks, the men’s wear designer jumped at the chance.

“I had never been in women’s before,” Bastian said, during an exclusive preview of the first Gant by Michael Bastian women’s collection for spring. “It’s learning a whole new language. I watched the dynamic between these people in ‘Niagara.’ She had to be sexy and edgy.”

Don’t expect the resulting 53-piece collection to target Monroe-esque sex symbols. For his first outing, Bastian didn’t turn his back on Gant’s preppy Americana roots. Instead, the launch collection is preppy with a sexy attitude, from a seersucker dress with lace overlay — “I thought it had a good-girl/bad-girl dynamic” — to a cropped and boxy shirt that could have come straight from a boyfriend’s wardrobe and a wrap cardigan that was directly inspired by a photo George Barris took of Marilyn Monroe on the Santa Monica, Calif., beach in 1962.

Luckily for Bastian, he also had a few living muses to guide him through the process of delving into women’s wear.

“I am lucky enough to have Eugenia Gonzalez as my p.r.,” Bastian said. “She was a very big muse for me, and very helpful. She always let me know what she was looking for and what she couldn’t find.”

The new collection is indicative of Gant’s ongoing rebirth in North America, which started in 2006 when the brand signed on Jeffrey Kalinsky for an exclusive collaboration. That deal lasted for three years and opened the brand to new retail accounts and an expanded customer base, as well as to the growth of the Gant Rugger contemporary brand and the overhaul of the company’s Fifth Avenue flagship.

The Gant by Michael Bastian men’s line will launch late next month at top Gant stores worldwide, as well as specialty stores such as Barneys New York, which will carry the line in Co-op; Saks Fifth Avenue; Scoop; Odin here; Ron Herman in Los Angeles; Colette in Paris; Selfridges in the U.K., and United Arrows in Japan. The women’s collection also is positioned at the contemporary level and ultimately targets a similar distribution tier.

“We look at this as an extension of Gant by Michael Bastian, rather than a new women’s line we are getting into,” said Ari Hoffman, chief executive officer of Gant USA. “This further emphasizes our collection and what Michael is doing for us.”

The women’s line is priced at wholesale from $65 to $130 for shirts and blouses; $220 to $325 for blazers; $65 to $130 for skirts, pants and shorts; $30 to $65 for T-shirts; $65 for sweaters, and up to $130 for cashmere pieces. Hoffman declined to disclose sales projections. “Our goal is to [initially] launch it with Gant stores and at two top stores, and the same strategy will apply to other countries around the world,” he said. “Then, after that, we will roll it out. We are not looking at this in terms of how many stores we can sell to. This is a much more targeted launch.”

Gant is planning to unveil the full collection in a presentation during New York Fashion Week in September.

The target audience for the women’s collection “is similar to the Gant guy,” Bastian noted, adding that she can be a college student up to someone in her mid-30s.

According to Hoffman, the line soon will include an expanded assortment of accessories with watches and footwear in the pipeline. As for Bastian, he may have been buzzing with excitement about designing for the opposite sex for the first time, but he has no immediate intention to add women’s to his eponymous designer collection. “I am not going to do that until we are 100 percent ready there,” he said.