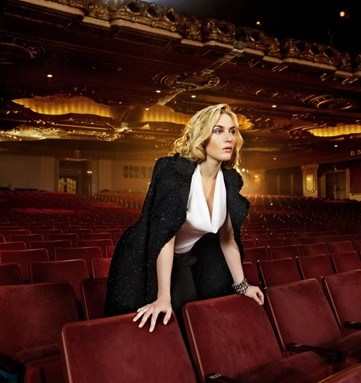 A few days before Kate Winslet attended her first Met gala, as the guest of Stella McCartney (alongside Madonna, Rihanna and Kate Hudson), she was working an 8:30 a.m. to 6 p.m. shift at an old movie theater in Jersey City.

It wasn’t as unglamorous as it sounds. A hair and makeup crew, publicists, lighting team and Craig McDean were all there to shoot the actress for St. John Knits’ fall 2011 ad campaign, for which she has signed a one-year contract. This is the first time Winslet, who’s worked with American Express and Lancôme in the past, has fronted a fashion house.

The deal transpired in the manner of a typical business transaction, wherein Winslet’s agents at Creative Artists Agency were approached by St. John, which initially floated the idea to Winslet’s stylist Jessica Diehl, also Vanity Fair’s fashion and style director, who, it turns out, was on set and chose to have Winslet dressed in a white cowl halter-neck blouse and wide-leg black pants for the last shot of the day. For her part, Winslet says she’s worn St. John before: “Absolutely, yes! I have worn several of their pieces over the years.”

Preshoot, she had been briefed on St. John’s fiercely loyal following. “I think that speaks a lot for the brand. To me, that just means a great deal,” she says. Yet not enough to know that the average St. John woman is politely described as “mature.” “I’m surprised to hear you say that, in a way,” says Winslet. “To me, it’s fresher than that. It seems fresher than that because of the fabrics. They’re extremely delicate, extremely wearable and very flattering.”

The shoot’s concept was to capture Winslet in an atmosphere that felt authentic. Thus the theater. “They want to keep it looking like me and not have it look like me pretending to be a model wearing these clothes,” says Winslet. “I’m obviously not a model. I’m not the size of a model. I don’t have the face of a model or the shape of a model.”

Neither did Kelly Gray, the daughter of St. John founders Marie and Robert Gray, whose campy, 22-year-run as the face of the house, in which she was usually photographed with a gaggle of shirtless men and/or wild animals, is the stuff of advertising legends. Between the gritty, vintage theater and Winslet’s relatively toned-down look, this campaign looks to be the polar opposite of the Gray days, but that’s not entirely the point. Trey Laird, of Laird+Partners, who has been working with St. John since last season, says the firm is trying to recapture some of what it had going on before. “St. John was a company that was built on imagery that was two things. One, it was consistent, and two, it was a real woman,” says Laird. “There was a real consistency [with Kelly Gray] and it told a story over time. So that customer connected to her.”

And St. John has had some issues with its customer. “When you’re a big, successful company, you have to be careful as you evolve,” says St. John Knits chief executive officer Glenn McMahon. That was a lesson learned the hard way for the Irvine, California-based brand, which McMahon joined in late 2007. In the 18 months prior to his the start of his tenure, St. John experienced a decline during which it went from being the reliable, number-one resource for stores like Saks Fifth Avenue, Neiman Marcus and Nordstrom to a staple of the clearance rack at the hands of an ambitious ceo eager to give the house a younger, trendier, sexier makeover. The cherry on top was signing Angelina Jolie to a three-year ad campaign contract, which granted her a sales cut and funding for her charities.

McMahon, who spent two years as president of Dolce & Gabbana USA (Ellen Tracy, Armani Collezioni and Donna Karan before that), maintains that St. John was over the recovery period (the firm briefly brought back the Grays as consultants in 2006) and onto its repositioning by the time he was hired, but he is a fixer of sorts. The house, known for its knit suits, needed to lure a new customer, but the strategy of former ceo Richard Cohen involved altering the cut and fit of the clothes (slimmer, more severe) and was far too radical. McMahon was given the same charge of revamping the label when he signed on, and the past 36 months have been devoted to what he calls “a very methodical process” that started with the clothes.

“Let’s get the product right,” he says. “Let’s make it relevant and modern and have it address the way women live today.” Or, in the words of George Sharp, St. John’s creative director, who was hired in 2008, “The days of the cookie-cutter bright knit suits are gone.”

The fall collection, shown for the first time in New York, featured such varying looks as one-shouldered silk gowns, leopard print coats and white blouses. One of the biggest strides made since McMahon’s and Sharp’s arrivals is the introduction of woven pants, which were not previously part of the St. John vocabulary and now make up 20 percent of the line. McMahon says it was a risky move.

“Well, the business was so successful,” he says. “Certain brands fill certain niches in the market, and I think this one was known for X product or Y product.”

In addition to wovens, St. John is expanding into costume jewelry and has hired Neville Ward, who was previously a designer at Lee Angel. There will be a few handbags in St. John stores for fall, with a full collection planned for 2012; McMahon also sees opportunity for fragrance and eyewear licenses in the future.

The company declined to reveal sales figures, but industry sources put St. John’s total volume at around $400 million, which is what it was in 2007. The recovery period was ill-timed to the economy of 2009, when St. John took a big hit along with other luxury houses. Now McMahon reports that “numbers are up, high double digits.” St. John is carried in 400 doors worldwide with 50 percent of sales generated from wholesale. McMahon would eventually like to hit a 60-40 split between stand-alone stores and wholesale in the U.S., where there are currently 26 St. John stores and 18 outlets. The company opened its first European shop-in-shop with Harrods in 2008. A stand-alone store opened in the Dubai Mall in 2010, and another shop-in-shop is planned for Tsum in Moscow later this year.

McMahon says things are on track, but “I’m never happy with where I am.” He and presumably his bosses at Vestar Capital, the venture capitalists who acquired St. John in 1999, consider the company at a critical juncture. “We feel that we need to tell the story now, which is why we’re ramping up our total marketing,” says McMahon. “We’re a brand on the move. We really believe that our future success will be in our ability to capture the daughters of our current customer.”

But St. John 2.0 is not targeting women shopping the contemporary floor. “When I say young,” says Jim Gold, president of specialty retail for the Neiman Marcus Group (where the news of St. John’s younger-minded initiative has been met with great enthusiasm), “I don’t mean twentysomething or thirtysomething. I mean getting the fortysomething customer.”

Or she could be Chinese. Like every other designer brand, St. John also sees major potential in China, where the company has 13 stand-alone stores, with plans to hit 60 in the next three to five years. “China is our single biggest market,” says McMahon, noting that sales there have increased 50 percent in the last year.

In related news, St. John is also relaunching e-commerce and implementing a social media strategy. All the stores will get a facelift by O’Neil Langan Architects, beginning with the New York flagship at 53rd and Fifth Avenue, where the current palette of black and beige will be transformed with more modern feminine tones of silver and platinum. “In their day, they were beautiful,” he says. “But now they look a little dated.” Same goes for those cookie-cutter knit suits.