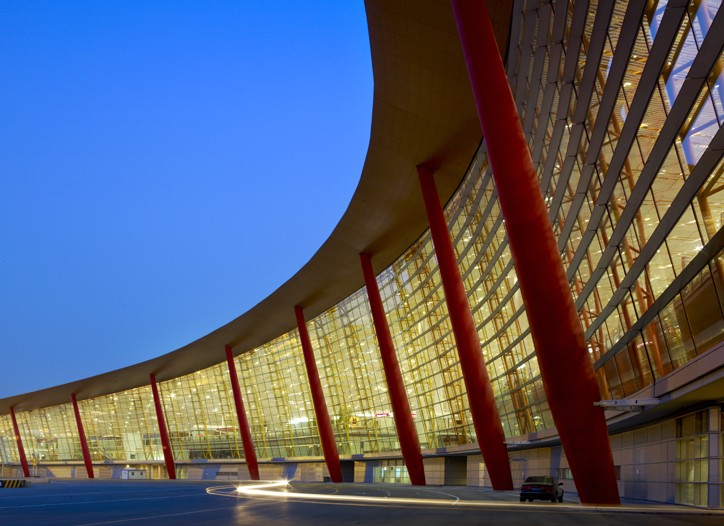 Some of the world’s hottest architects are setting the stage for the summer Olympic Games.

After nearly five years of design and construction, the buildings going up for the Beijing Olympic Games are some of the world’s most anticipated among architectural buffs. With international names such as Herzog & de Meuron, Sir Norman Foster and Rem Koolhaas behind them, these new structures represent just a small percentage of the construction overtaking the Chinese capital as it readies for the onslaught of visitors during the Games, which will take place August 8 to 24.

Renderings of many of the designs already have been splashed across magazines and newspapers, which have made them appear as if they were pulled from the ether. But while the city has been—and continues to be—a massive construction site, the deadline imposed by the Olympics also means that a slew of buildings unrelated but certainly pivotal to them also will be completed, including the new Foster-designed airport and the Koolhaas-designed headquarters for China Central Television. And at least one thing remains a constant in Beijing’s ongoing building boom: They’re all monolithic structures designed to stir up awe and excitement. WWDScoop previews some of the more eye-catching creations.

NOTABLE DESIGN DETAILS: The structure, which resembles a bird’s nest, features a massive basketlike weave of load-bearing steel that comes together to form the stadium’s shell. Perhaps the most famous project of all the Olympic buildings, the stadium design was commissioned after a worldwide competition in 2003, which was won by Herzon & de Meuron in collaboration with the Chinese artist Ai Weiwei. The shape—circular, although shorter on the east and west sides and taller on the south and north—was inspired by Chinese pottery and vases, but also accommodates spectators’ sight lines along the largely rectangular field.

THE INSIDE STORY: The main focus of the Games, the stadium has had more than its fair share of controversy. In 2004, the immense cost, $500 million, caused the design to be scaled back, and features, such as a retractable roof, were jettisoned. Also, in the wake of mounting controversy over the government’s involvement in Darfur, Sudan, Ai distanced himself from the project, and the Olympics in general. Moreover, in January, The Times in London reported that at least 10 workers had died during the stadium’s construction, which the newspaper attributed to both the rush of the building schedule and the architecturally ambitious nature of the design. The opening ceremonies, to be orchestrated by director Zhang Yimou and artist Cai Guo-Qiang, will be staged on 8/8/08 to a crowd that’s expected to include President Bush and U.K. Prime Minister Gordon Brown.

NOTABLE DESIGN DETAILS: The National Aquatics Centre, or “The Water Cube,” takes its inspiration directly from its function—housing water. The facility, which will be the location of all the swimming and aquatic events, is a square box composed of more than 4,000 transparent bubbles that make up the exterior. Technically, the bubbles are made of a kind of Teflon called ethylene tetrafluoroethylene, or ETFE, and vary in size, with some as tall as 30 feet. They create a rubber membrane for the outside of the structure, and in essence are doubly insulated, making the interior climate easier to control and thus incredibly energy efficient. An intricate LED system implanted directly into the air-filled cushions will illuminate the building at night, giving the structure a luminous effect.

THE INSIDE STORY: The building will be one of the main focal points of the Olympics. It has managed to escape controversy over its $200 million cost, more than half of which came from prominent donors. After the Games are over, there is a plan to convert it into a retail center and an athletic facility with tennis courts.

LOCATION: East of the city on the Third Ring Road.

NOTABLE DESIGN DETAILS: A radical design, CCTV forms a continuous loop, with twin 755-foot towers connected by an L-shaped base, and another L-shaped section bridging the top of the towers. In order to build that portion, workers constructed the towers to rise at equal heights, and then gradually built outward at the top. Finally, in November, the upper bridge was connected, putting the finishing touches on the exterior, but had to be timed to a certain part of the day when the temperature’s effect on the steel and its expansion and contraction would allow the joints to fit perfectly (in this case, around dawn).

THE INSIDE STORY: In 2003, Koolhaas had invitations to participate in two different architectural competitions: one for the rebuilding of Ground Zero at the World Trade Center in New York, and the other for the headquarters of China’s state-owned TV network. Koolhaas chose China and partnered with Scheeren in order to create one of the most radical skyscraper designs in history. However, many critics and observers believed the tower was purely a publicity stunt, and a myth, which led some news outlets to report that the tower wasn’t going to be built. Statements issued by the firm’s Beijing-based partner, Scheeren, had to reassure the public that the building was, in fact, under construction. While the interior of the building won’t be totally finished until next year, what’s drawing the most attention at the moment isn’t the architecture, but rather Scheeren’s budding romance with actress Maggie Cheung.

LOCATION: North of the Olympic Green.

NOTABLE DESIGN DETAILS: Created to be an information hub, the Digital Beijing building will be a command center for the Olympics. Emblematic of the digital age, the building takes its inspiration from a computer motherboard, with four narrow slablike structures situated close to, but not quite touching, each other. Vertical lines on the glass facades crisscross each other like the lines of a circuit board.

THE INSIDE STORY: Out of all the structures commissioned in Beijing for the Olympics, Digital Beijing has the distinction of being the only major building to be designed by a Chinese firm. And since its completion last winter, it is also the first to be finished. While the structure’s main purpose is still being worked out, the fact that there is an entire building dedicated to Olympic information underlies how complex a feat it will be to coordinate the different sports activities, which will be spread out across 37 venues, with some satellite locations in Hong Kong and Shanghai.

THE INSIDE STORY: Travelers landing in Beijing Airport on runway 36R have been noticing a long structure that begins when the airplane first touches down and continues when their flight is at the other end of the runway. Indeed, the new terminal, at 1.8 miles long, is the length of an airport runway. While it is expected to garner universal acclaim, the terminal’s main benefit will be that it will dramatically raise the capacity from 52 million to 76 million users. However, as the building was being unveiled in February, the city was already announcing that it was looking for a site to build a second airport in anticipation of the ever-increasing growth of air traffic by 2015.