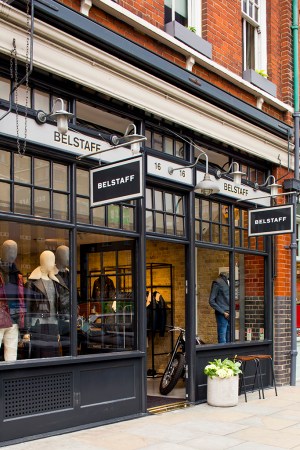 LONDON — Belstaff is shifting its retail expansion into high gear, with plans to broaden its presence in the U.K., and push farther into the U.S., Europe and Asia-Pacific as it molds itself into a lifestyle brand.

Chief executive officer Gavin Haig said that while the brand has a strong heritage, it is thinking and acting more like a start-up, testing new markets and product offers, and taking advantage of the fact that it’s still small and nimble.

“We’re getting into the growth phase now,” he said during an interview at the company’s headquarters above the flagship on New Bond Street. “We made sure we’ve built strong foundations and now we’re ready to expand.”

At home, the company has just unveiled a second store, in London’s East End. Spanning 1,080 square feet, the unit is located in Old Spitalfields Market and features exposed brickwork and a painted resin floor. Designed by William Sofield, the interior features raw steel and cork fixtures, and the aim is to appeal to a younger, edgier audience with a more intimate space than that of the New Bond store.

Haig added that a third London unit will open at Westfield in October. It will span 1,620 square feet and have a “more commercial feel” than its sister units. “What we don’t want are cookie-cutter units,” said Haig, who joined Belstaff last year after spending two decades at Compagnie Financière Richemont, most recently as international managing director of Cartier.

Belstaff is owned by JAB Holding Co., whose portfolio also includes Jimmy Choo and Bally. After a tumultuous few years following its relaunch in 2011, the brand now appears to be on firm footing under Haig.

Belstaff was founded in Staffordshire in the English Midlands in 1924, and it quickly became known for its waxed cotton fabric jackets beloved of motorcycle enthusiasts. It was later owned by Italy’s Malenotti family, which focused on the outerwear offer alone, and in 2011 they sold it to a group of investors including Labelux (which has since been folded into JAB), Tommy Hilfiger and Harry Slatkin.

They relaunched the brand as an ultra high-end luxury label, with outsized ambitions and ad campaigns starring the likes of Ewan McGregor and David Beckham.

Haig is Belstaff’s third ceo since 2011, while Slatkin — the launch ceo — is no longer involved in the business.

Designers Frederik Dyhr and Delphine Ninous are in charge of the men’s and women’s design roles, respectively, following the exit of Martin Cooper, who left his job as Belstaff’s chief creative officer last year.

On the retail front, Haig is also eyeing the SoHo and TriBeCa neighborhoods for Belstaff’s second Manhattan unit, and is planning to open a pop-up before the end of the year in one of those neighborhoods to test the market, with plans to open a store next year in one or both parts of town.

In Germany, the brand plans to add to its store portfolio with units in Frankfurt, Düsseldorf and Hamburg, where it is scouting store locations. It has one store, on Munich’s Maximilianstrasse, and said Germany is one of its strongest markets.

Pop-ups in those three cities are planned for the next three or four months, with a minimum of one store set to open in Germany next year.

Asia-Pacific, meanwhile, is under-penetrated and pregnant with potential.

Earlier this month the company opened Belstaff Japan KK, a 100 percent-owned subsidiary, with the aim of laying down roots in major cities across a region that Haig is well familiar with. During his tenure at Cartier, he spent 12 years in Tokyo, where he was simultaneously president and ceo of both Cartier and Richemont Japan.

“Japan is coming back, and the Chinese are pouring in,” said Haig, pointing to the weakness of the yen and the currency-based bargains it offers to Chinese tourists.

Belstaff will open four shops-in-shop in Japan next year, in Tokyo, Osaka, Nagoya and Kobe. In Nagoya, it will open at the Matsuzakaya department store while in Kobe it will have a presence at Daimaru. Haig said the plan is to have flagships in Tokyo within two to three years.

Greater China is also in Belstaff’s sights, with an opening in Macau set for October. The brand is partnering with Rainbow on the 2,700-square-foot space, and there are one to two additional stores planned.

Asked why Belstaff would take a chance on Macau — and eventually Hong Kong — when so many luxury brands are suffering due to the political climate and the fact that the Chinese are choosing to make their luxury purchases elsewhere, Haig said Belstaff is a different animal from a Burberry or a Gucci.

He said the climate has been painful for established brands with big networks, but for “discovery brands” that are not in Greater China yet, the only way is up. “Also, if you are selling ready-to-wear and leather goods — as opposed to watches and jewelry — you are more protected,” he added.

Haig said the company is still mulling its distribution options in Hong Kong.

In addition to retail, the brand is bulking up its accessories business, with plans to launch new men’s accessories created by an external designer in January or February.

Overall price points at Belstaff are similar to those on the Burberry spectrum, he said, noting that the brand took a long, hard look at the eye-wateringly high prices present when it was launched, and made them more accessible.

With regard to accessories, the company recently collaborated with the Japanese eyewear brand Native Sons on a limited-edition collection of 70 pairs of oversize aviator glasses that sold out worldwide.

“It was an experimental project,” Haig said. “I want Belstaff to be a fun place where people can go and discover and where the staff can play a little bit.”

He said his aim is to create a full men’s and women’s lifestyle brand based on Belstaff’s spirit of “epic adventures.” He wants the brand to draw inspiration from its history of making performance motorbike gear — and broaden its offer and appeal at the same time.

He said the plan over the next five to seven years is to build out the accessories business, eventually launch a fragrance, and create a company that is known as “a great incubator for talent.”