The brand is preparing to unveil a sporty ready-to-wear and accessories collection at London Fashion Week. 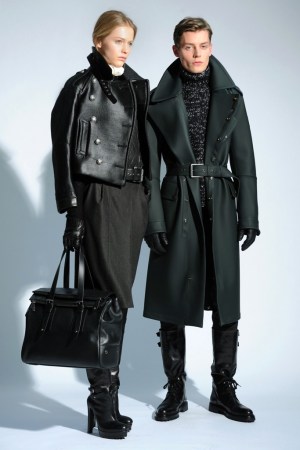 LONDON — Belstaff is revving up for its debut at London Fashion Week on Sunday, preparing to unveil a sporty ready-to-wear and accessories collection focused on luxury fabrics, exotic skins, heritage details and finishes.

Chief creative director Martin Cooper, a Burberry alumnus, said he headed straight to the archives for inspiration for the men’s and women’s collection. “Everything in this collection needed to refer to the archive, and we really wanted to take ownership of the brand icons,” said Cooper during a walk-through here.

He pointed to a plethora of Road Masters — Belstaff’s classic belted jackets that land just past the hip — in oiled crocodile, pearlized python, napa or cavallo.

Belstaff was founded in Staffordshire in the English Midlands in 1924 and became known for its wax cotton fabric jackets for motorcycle enthusiasts. The company later became the go-to brand for bikers, aviators and sporty, outdoorsy types. Belstaff also made goggles, gloves, boots and helmets.

While the collection is heavy on outerwear — from woolen peacoats trimmed in cavallo leather, to cropped biker jackets made from hand-painted python, to a long, PVC “dispatch rider’s coat” — there is also a wide selection of rtw and accessories. Satin dresses have delicate metal chains embedded down the front, while silk ones come with epaulets and collar latches echoing the brand’s coats. There are skinny suede biker trousers, and a surfeit of cashmere, angora and wool knits, which Cooper said are meant to cling to the body in a “sensual” way.

Cooper said about 80 percent of the design concepts are for both men and women, which is why it was important to him to make the clothes as tactile as possible.

Harry Slatkin, the company’s chief executive officer and an investor in Belstaff alongside Tommy Hilfiger and Labelux Group, said there are 300 different accessories styles for men and women, including suede clutches with the “biker tread” motif, crocodile weekend bags, and a small selection of boots and shoes. Slatkin said Belstaff will go bigger on shoes for spring, and added that overall Belstaff is looking to generate 60 percent of revenues from women’s wear and 40 percent from men’s wear going forward.

The average entry price for a jacket, he said, is $850, and the entire collection is made in Italy.

In the fall, the brand plans to open flagships in London and New York and will relaunch its e-commerce business in September.