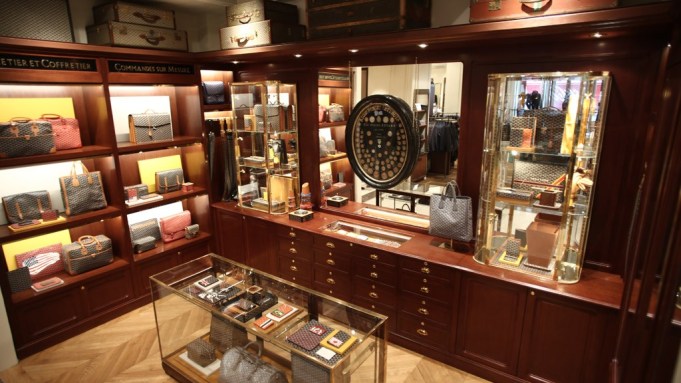 Bergdorf Goodman has opened a shop on the main floor devoted to Goyard, the legendary Paris trunk-maker.

The shop, which is about 200 square feet and is located steps inside the store’s main entrance on Fifth Avenue, is the first men’s shop concept in the U.S. and only the third in the world. There are also Goyard men’s boutiques on the Rue Saint-Honoré in Paris and Hankyu in Osaka, Japan.

“It’s one of the smaller parts of our renovation, but it’s an important part,” said Joshua Schulman, president. “It’s one of the most significant positioning elements for us. It’s the first thing you see when you walk in the Fifth Avenue door.” For the past two years, Bergdorf’s has been immersed in a massive renovation of its three-floor, 41,500-square-foot men’s store, the first comprehensive revamp since it opened in 1990. The majority of the work has been completed, but still to come is a shirt and tie area that will start being worked on this spring, as well as the “long-awaited Goodman Bar” on the second floor, Schulman said.

But for now, it’s Goyard that is garnering the attention.

“When we were laying out the renovation of the men’s store,” Schulman added, “we thought it would be a perfect way to celebrate our partnership with Goyard and also surprise and delight our men’s customer. We’ve developed a strong male clientele for the brand within our women’s store.”

Bergdorf’s has carried the Goyard collection of small leather goods and accessories in a shop within its women’s store since 2006. The men’s line is also carried at Barneys New York, but Schulman claimed the Bergdorf presentation is more comprehensive. It includes the brand’s signature trunks, briefcases and travel accessories, but also offers belts, watch boxes, cuff-link boxes, dog accessories, desk accessories and gloves, many exclusive to Bergdorf’s in the U.S. Prices range from $310 for small leather goods to $8,400 for a leather trolley.

Schulman said the product in the shop was “curated” by the Goyard team in partnership with Bergdorf’s. The shop also includes some New York-specific pieces, such as a bag with a monogrammed Chrysler Building, as well as wallets with an American flag or the Goodman logo.

The shop will host a monogramming event on Feb. 28, where customers can have any piece customized with any image of their choosing, including their own handwriting or signature.

As part of the men’s renovation, Bergdorf’s added a classifications small leather goods department on the main floor, and Schulman said that since it opened last year, it has performed well. “On a Saturday, it has the energy of a women’s handbag department,” he said. As a result, he’s expecting similar strong results from Goyard.

To further publicize its heightened focus on men’s wear, Bergdorf’s will substantially increase its men’s-focused advertising for the spring season. The retailer will continue its Goodman’s campaign, which kicked off for fall and highlighted “authentic New York tastemakers with great personal style,” according to Schulman.

For the second season, the campaign is being expanded to eight magazines from six, and The New York Times has been added. The store will also run two outdoor billboards, up from one last season.