Berlin Fashion Week: Ones To Watch

What to look for at Berlin Fashion Week. 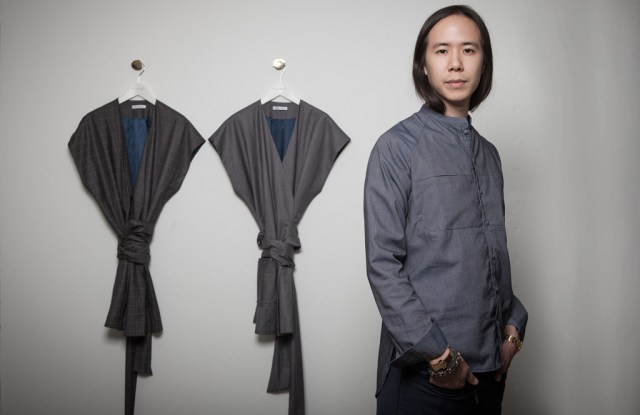 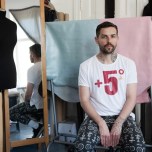 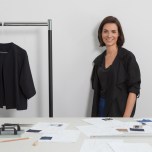 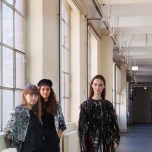 “People don’t want green clothes because there’s a stereotype: green is not sexy, it’s not modern and it’s not wearable,” she said. “I want to show them that great design can be also green.”

The fledgling line, named for Leifert’s great-great-grandmother, presents graceful minimalist separates that are environmentally sustainable and made with fair labor. Her spring capsule collection, showing at Premium, is inspired by feminine styles of the Fifties — modernized in linen, cotton and Tencel. The 10 looks include cropped and kimono jackets, a pencil skirt and short and long trousers. A full-legged, bare-shouldered jumpsuit can be dressed up for evening.

Among a natural and neutral palette of blues, tan and cream are orange accents, and a wool blend in navy, green and camel.

Leifert said the simple design puts the focus on the hard-to-find fabrics. Her production is certified Global Organic Textile Standard, as is much of the material. She intends the clothes to be sturdy, wearable and timeless.

Always a fashion fan, Leifert, who grew up near Heidelberg, first got a law degree. She sought wearable, ethical clothes to go with her vegan lifestyle, and finding none, decided to make her own. She enrolled as a student in fashion and business management at Berlin’s AMD School of Fashion and will graduate in July — a year after launching her own line.

At Premium, Leifert hopes to attract concept stores and small boutiques in Germany. She also sees opportunities in Scandinavia, where value is placed on quality and sustainability. The Philomena Zanetti summer collection retails from 200 to 700 euros ($225 to $787).
— Susan Stone

“I really like a lot of classic suits and shirts, but you always miss some edge in it, and I like edge in clothes in general,” said 36-year-old Kovačević.

Pastels dominate — powdery pinks and baby blues, as well as purple. He works a heavy black textured silk into a kind of abaya, a traditional Arabic flowing cloak. His first foray into footwear produced his own version of dress shoes — tasseled creepers-meet-platform oxfords in pearly metallic leather.

Wild as it all sounds, the collection marks a move to the serious for the Serbian-born designer, who graduated from Berlin’s Weissensee Arts Academy and founded his label in 2010. Sadak’s vivid avant-garde sportswear has brought him a following including hip-hop artist Chris Brown and the costume designers for “The Hunger Games.” He made the clothes that will appear in November’s sequel, “Mockingjay Part 2.”

The collection ranges from 120 euros, or $135, for leggings, 420 euros, or $472, for a T-shirt and 1,300 euros or $1,467, for a jacket. Sadak is sold at WUT Berlin in Tokyo, Fedora International and Microwave in Hong Kong, Overture in Taipei and H. Lorenzo in West Hollywood. At the moment, he still has no presence in his most challenging market — Europe — but said a more immediate goal is to master the monochrome.

“For me it’s not a challenge anymore to work with prints,” he said. “The challenge would be to do something really clean.”
— Susan Stone

Indeed, Rohner, born in the Ticino region of Switzerland, and the Russian-born Stein have been pulling, stretching, tearing, coiling or otherwise transforming fabrics together since the second semester at Berlin’s Weissensee Arts Academy. “And we’ve never stopped,” Stein said.

“We met via our approach, as we were the only ones in class who were into structure, technology — not to mention full combinations. We both like to do whole looks, down to accessories and shoes,” added Rohner.

The duo founded Steinrohner in 2013 directly after receiving their M.A.’s in fashion. Their simple but sometimes pumped-up shapes, enhanced with bold dimensional treatments or ethereal effects, landed them in the finals for the European Design and Baltic Fashion awards in 2014, the final round at Hyères and the winners’ circle for the Premium Young Designers Award in 2015.

Fossils and lava have been inspirations, and next season, they look to the underwater world Rohner experienced diving in Thailand. Beyond the seasonal print worked from Rohner’s photos and late 19th-century zoologist Ernst Haeckel’s evocative sea creature lithographs, Steinrohner’s “Relieve the Reef” collection is animated by handmade jellyfish waves on black vinyl capes and coats, tentaclelike projections on a straight white skirt, or flutters of hand-pulled threads on the hem of culottes or a zip peplum jacket in a novelty red woven cotton sponsored by Swiss Textiles.

These concept pieces set the tone for a collection that’s also strong on more low-key items. Retail prices range from 75 euros, or $84, for plain shorts to 1,400 euros, or $1,582, for a hand-jeweled dress. Steinrohner is carried by Ssomo in China and will launch its online store this summer.
— Melissa Drier

Educated at the Hogeschool voor de Kunsten (ArtEZ) in Dutch Arnhem and Berlin’s Weissensee Arts Academy, Fan settled in Berlin after stopovers at Alexander McQueen and his sister Chi Chi Fan’s handbag company. “I wanted freedom,” he said. He is also currently creative director of a Berlin start-up.

Using suit and uniform patterns and fabrics like virgin wool and cotton as a point of departure, his designs are a contemporary deconstruction of the classic. Experiments with the three-dimensionality of materials or the use of tech textiles for tailored pieces, plus an added twist of ancient Chinese craftsmanship, reflect his own passage between East and West, tradition and modernity.

Set to retail between 180 euros and 1,250 euros ($200 to $1,400), his spring collection uses his favored palette of dark blue, shades of jade, yellow and white sparked with accessories of jade and gold — and furry shoes.

“It’s going to be hairy,” Fan said, “because I love experiments with structure — an influence from my education in Arnhem, where I worked with artists and dancers. This gave me another insight into sculptural dimensions and a deep consciousness of body movement that I try to express in a balance between material and silhouette.”
— Qunyh Tran