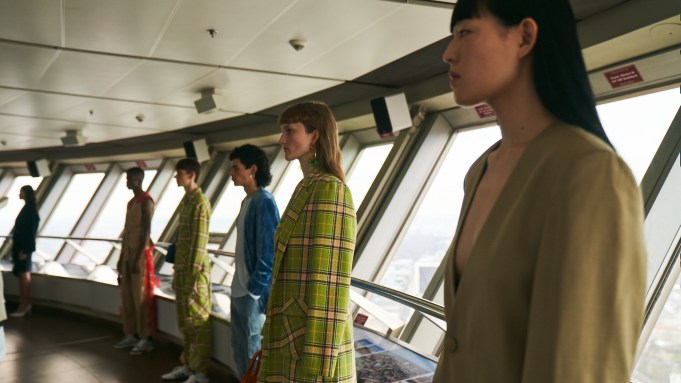 BERLIN — After seasons of ongoing struggles for direction, a reshaped Berlin Fashion Week entered the new decade with different formats.

Besides usual suspects like Lena Hoschek and Sportalm, MBFW succeeded in wooing back brands like DSTM, Nobi Talai, Last Heirs, Odeeh and Wolfgang Joop with his new line looks, brands that presented off-schedule or opted out altogether during recent seasons. It was likely thanks to the vast new venue at Kraftwerk Berlin, a defunct power station that captured the rough spirit of the city and provided for a public exhibition hall, a 150-foot runway and a more intimate studio that once housed famed techno club Tresor. At Kraftwerk and off-site, brands focused on their strengths as pragmatic niche concepts.

“The constellation with runway, studio and a public installation space was very well received by both, designers and visitors. The atmosphere was great and it just felt right,” said Marcus Kurz, managing director of organizing producer Nowadays. The public exhibition that included looks by local designers like Vladimir Karaleev and art installations by Armin Morbach, he added, attracted some 11,000 visitors. The live-stream and social media engagement increased significantly, too, although final numbers are yet to be confirmed.

But the location wasn’t the only novelty after 13 years of fashion weeks and five years of activity of the first Fashion Council Germany. Despite requiems on the end of the city as a fashion hub with the continuous disappearance of brands and presentation formats since Berlin Fashion Week launched, the city has remained the go-to spot for the German market. And there’s a new sense of pragmatism as many of the local designers have carved out strategies in face of the limitations of lacking fashion industry infrastructure.

Michael Sontag has continued his line with a store in Kreuzberg after debuting at fashion week in 2009 and is a creative consultant for the revived Weimar-era brand Valentin Manheimer. Tutia Schaad, former cofounder of Perret Schaad, has become a design professor and head of the creative arts faculty of the Berlin branch of Atelier Chardon Savard, while preparing to launch a label and designing costumes for institutions like Münchner Kammerspiele and Maxim Gorki Theater. And Dawid Tomaszewski, who presented his collection at Prince Charles club, produces collections for teleshopping channel QVC besides his own line — just to name a few paths.

German retailers, too, seem to have become more alert and trustful of homegrown designers. Department stores like KaDeWe, Hamburg’s Unger or München’s Lodenfrey are increasingly stocking — and keeping — German brands like Nobi Talai and William Fan.

After returning to Berlin from Paris last season, Nobieh Talaei delivered her best collection yet, a juxtaposition of sharply tailored suits in shades of black, gray and orange, contrasted with flowing silks in earthy tones and sophisticated plissés. The prints on the suits, coats, and on her first bags are drawn from one of the antique Persian kilims she owns. The new decade also marks a fresh start for Talaei: She will launch her online shop in a few weeks and expand on her retail structure that already includes stores like Apropos, Lodenfrey and KaDeWe.

“We realized we need a presentation platform other than just a showroom to present our collection, and the new venue offered a good infrastructure. The timing is slightly early, but it helps to open the season here and get a first feedback before moving on to Paris,” commented Otto Drögsler on Odeeh’s return to MBFW. Set against raw concrete, the sounds of Nils Frahm and somber Alfred Hitchcock echoes, the duo presented a glamorous collection with colorful prints and tailored cuts, but added bolder-than-usual asymmetric shapes and knitwear this season. And they brought some friends for their comeback: The Odeeh looks were paired with bags by Hamburg-based accessories manufacturer Stiebich & Rieth and eyewear by Austrian sustainable brand neubau.

William Fan couldn’t have taken his “Berlin” collection to a more symbolic place than the TV Tower, the highest landmark right in the heart of the city. Building on his classic tailoring, Fan added evening dresses, abstract T-shirts and more accessories. While mainly sticking to sharp, clean shapes, he proved a material maximalist once more — the models paraded a burst of colorful sequins, velvets, laces and denim. While staying out of e-commerce, Fan plans to speed up retail expansion with trunk shows and selected brick-and-mortar shops.

Showing on the 21st floor of an empty office building due to be renovated, Odely Teboul’s “Bourgeoibstrus” collection is handmade entirely of upcycled materials. Adding to her signature crochet, Teboul deconstructed “bourgeois” fabrics like gingham check wool, bouclé and crystals, creating a stitched textile out of established elements.

After debuting at Berlin Fashion Week in 2009, Jen Gilpin returned to the runway for DSTM’s 10th anniversary with a ballet performance by Berlin-based contemporary dance choreographer Salvatore Siciliano, accompanied with live music by Emika. Reflecting the Berghain société’s knack for fetish with predominantly black leather, latex and silks, adorned with harnesses, zippers and chains, Gilpin presented a compilation of luxury undergarments and apparel from ten years to show the sustainability of both, the eco-certified materials and designs, and how they sit and move on the bodies of the dancers from all perspectives.