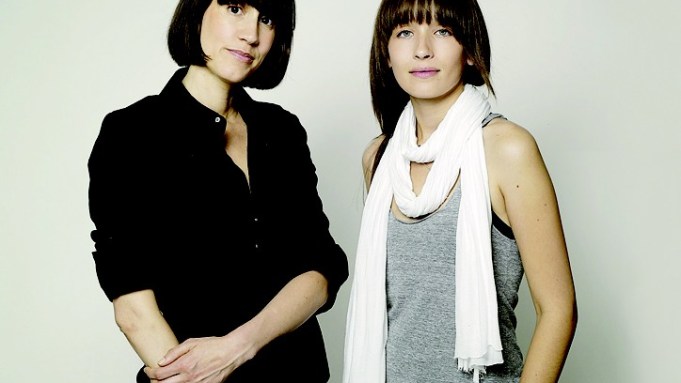 There’s something fishy going on at Mongrels in Common.

The Berlin-based design duo of Christine Pluess and Livia Ximénez-Carrillo first met while students at Esmod and established their label in May 2006. Like their biographies (Pluess is Peruvian-Swiss and Ximénez-Carrillo is German-Spanish), their design concept has always featured a mix of cultures, and combined masculine and feminine elements.

“We like to mix what normally doesn’t fit together,” noted Ximénez-Carrillo. For example, soft draping works with sharp geometrics, or a motif by a Berlin street artist is printed on silk.

Next spring, the pair will develop its offbeat, grown-up aesthetic in an unusual material: salmon leather. This alternative to crocodile and snakeskin will be used as decorative insets on silk blouses and dresses, but also in full for lean, legginglike pants, little cropped jackets, handbags and even a bra.

Michael Sontag is one of Mercedes-Benz Fashion Week Berlin’s freshest contenders, though his upcoming Berlin show is not his absolute first. The 29-year-old, who is completing his fashion master’s degree at the Berlin-Weissensee Academy of Arts, was one of the winners of last year’s Becks Fashion Experience award, and has also sent his women’s wear down other award-show runways. But the Bebelplatz presentation for spring marks his commercial debut — or at least the promise of one, as pricing and production specifics have yet to be fixed.

From a stylistic standpoint, however, Sontag’s orientation is clear. His work has always revolved around the play between structure and flow, and next season will see fluid dresses that look like they were simply thrown on the body, juxtaposed with more graphic, boxy forms.

If Little Red Riding Hood decided to do some hard-core clubbing, she would probably find something suitable to wear at Starstyling. Irreverent, playful and with more than a splash of irony, its collections are “like a treasure chest of goodies that you just grab things out of,” explained designer Katja Schlegel.

Schlegel originally trained as a costume and stage designer before launching Starstyling three years ago with partner Kai Seifried. Besides the mini Berlin flagship, Starstyling has made its way into European doors such as Topshop in London and Colette in Paris, plus a slew of boutiques in Japan and elsewhere in Asia.

Next season features a flexible DIY modular approach using neon-colored Velcro strips. Pockets and pouches can be attached, little beaded pillows can be stuck on as brooches and a pleated taffeta skirt can be joined to a top to form a dress. “It’s not that I exactly like Velcro,” said Schlegel, a playful gleam in her eye. “I actually find it pretty disgusting. But it’s exciting pushing things in a new direction.”

It’s not every designer who mentions parallelograms while talking about fashion. Having previously been inspired by an equilateral triangle and a quadrangle, Patrick Mohr is now taking a rhomboid as the theme for his spring collection.

With geometrically inclined pockets, cuts, prints and accessories, Mohr gives men’s and women’s streetwear an avant-garde twist at distinctly non-avant-garde prices. “My target group is cool and stylish, but not necessarily holding a lot of money,” the Munich-based designer said. “I want my clothes to be accessible to anyone who wants to wear them, not just the superrich.”

With basic jeans retailing for less than 100 euros, or $140, and T-shirts for less than 50 euros, or $70, Mohr is more affordable than many of the labels with which he hangs, such as Comme des Garçons and Raf Simons. And with an eye on business viability, the spring show will be a mix of wearable basics to appeal to buyers, and innovative showstoppers to give the press something to talk about.

Penkov: Back to the Futuristic

Bernadett Penkov thinks her designs provide women with a bit of a protective layer. “I hope it makes them feel strong — sexy but not exposed — and is something they can wear with their heads held high.”

Launched in 2005, her signature line is known for its dresses and trenchcoats, which go day to evening without missing a beat. Retailing between 400 euros, or $557, and 1,400 euros, or $1,950, Penkov is sold in Japan, Hong Kong, the U.S. and throughout Western Europe.

Showing in Berlin means both a homecoming and a bit of civic pride for Penkov, who’s participated in London and Tokyo Fashion Weeks. The 33-year-old Berlin-based designer says the capital is on the right path toward finding its place in the fashion world.

The spring collection draws subtle inspiration from “Blade Runner,” she said, though favoring elegance over gloom. Some garments are also influenced by jewelry and chains, and the overall mood will be “futuristic and yet nostalgic at the same time.”

Lena Hoschek is a material girl. She lets the fabric set the framework for her designs and collections.

“It doesn’t make sense to have something in mind if you don’t have the fabric,” she declares. This blend of practicality and whimsy is more than evident in the 27-year-old’s designs.

Based in Graz, Austria, Hoschek, who interned for Vivienne Westwood before founding her own label at the age of 24, had an early start in stitching — her desire for a dirndl as a teen started her designing. The sexy silhouette of the region’s national costume melded with her love of rockabilly to form a signature style full of candy colors, high-waists and full skirts.

In Berlin, Hoschek will show a collection influenced by Hawaii, starring straw colors and silks, with hula, lei and custom flame prints — and, she hopes, models with actual curves on the catwalk.