Highlights from the recent shows at Mercedes-Benz Fashion Week Berlin. 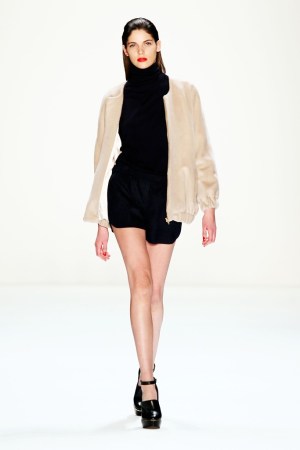 Resident fashion minimalist Hien Le opened Mercedes-Benz Fashion Week Berlin with a clean and simple yet sensuous collection. It featured his first print, which was inspired by Mark Rothko, and used textural contrasts and warm-handled fabrics to add a comfort factor to his Berlin cool.

Berlin’s dark duo, Augustin Teboul delivered a pan-ethnic-influenced procession with looks Odély Teboul described as being “a bit tribal and geometric” but also more wearable than ever. All-black looks were encrusted with beads and combined crochet with polka dot sheers and delicate lace, the edgy, intricate hand-crafted look they’ve made their own.

Michael Sontag’s fall collection was all about construction, or the seeming lack of it. His often hard-to-fathom drapings had a new sense of fashionable déshabillé, the satin gowns looking like their wearers had just rolled out of bed. Rosenkavalier boots or no boots.

Boss’ bad-boy and cheeky-girl brand Hugo, which turns 20 this year, used graphic lines and inset details to accentuate and sharpen silhouettes for both genders. Women’s creative director Eyan Allen went long, and all out for shape, whereas men’s designer Bart de Backer built in, rather than up, the brand’s trim, tailored silhouette.

Dorothee Schumacher is Germany’s master of commercial charm. Inspired by the saying “Every rose has its thorn,” she mixed blooming opulence with some pointedly off hues, gleaming fabrics, fur, matte Neoprene, and laser-cut leather, plus a smattering of brooches for a look that was lush without being lurid.

In his last collection for Rena Lange, designer Carsten Fielitz drew inspiration from the linear plays of Piet Mondrian, the brushstrokes of Hans Hartung and Frank Stella’s geometric forms and color fields. Yet more than anything, he further refined and modernized the Munich fashion house’s iconic style elements, leaving it ready for expansion under its new Austrian owners, Rudigier & Partner.

Berlin-based Vladimir Karaleev has a firmly established design vocabulary that’s nonetheless based on an ever-mutable pastiche of cuts, unfinished edges and unusual fabric mixes. He entered the men’s wear arena this season with his somewhat anarchistic looks, but no matter how complicated the cut or raw the finishing, his lineup for both genders has an infectious ease and an alternative elegance.