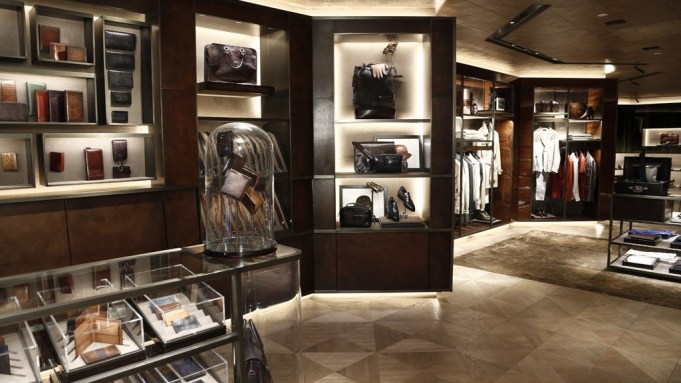 PARIS — Berluti’s latest step in its evolution from haute cobbler to luxury men’s fashion house is a big one: a 3,200-square-foot foothold at 677-679 Madison Avenue in New York.

“We wanted to stay in the epicenter of the city’s luxury retail market with a larger space to offer the full Berluti experience to our customers,” Arnault told WWD, referring to a smaller, footwear-focused unit it previously operated farther uptown at 971 Madison, and its recent expansion into made-to-measure suits and sportswear. “Madison will for sure become a destination address for bespoke lovers.”

Its “Grande Mesure” service, which made its debut in Paris in November, has been popular with clients who used to frequent Arnys — an historic tailor whose landmark Left Bank boutique and skilled artisans Berluti acquired — and has drawn “a lot of new customers, either new to Berluti or new to the bespoke offer,” Arnault said.

Berluti offers the service in its three Paris stores, as well as flagships on London’s Conduit Street and in Tokyo’s Ginza district.

For Madison Avenue, “the tailor will come directly from the Paris atelier to take measurements and adjustments over a total of three visits,” Arnault explained, noting each order takes two to four months to fulfill. A tailor is expected to visit the New York store four to five times a year, or more if the business dictates.

Upon entering, the store displays leather goods — the heritage of the brand — along with scarves and belts. Next up is sportswear from the spring collection, including jeans, sweaters, jackets and sport shirts. The rear of the first floor is devoted to footwear — styles that range from casual to dress — and there’s a patina bar where the shoes are customized with different dyes in order to create one-of-a-kind looks. Footwear prices range from $1,300 to $2,150 for ready-made, while bespoke models start at $6,000.

A staircase leads to the second floor where there are separate rooms, or salons, for the off-the-rack clothing and sportswear. There’s also a separate area for the bespoke clothing and furnishings, as well as bespoke shoes.

Off-the-rack suits retail for about $4,000 while bespoke clothing is about $10,000. Despite the high prices, Berluti’s Italian-born creative director Alessandro Sartori said he’s confident the brand’s European flavor will resonate “across the pond.”

He described the target customer as a “modern gentlemen with an international profile, so whether he’s from Paris, London, Tokyo or New York, he holds to similar aspirations. He is not into trends, but into style, and dresses boldly with a strong predilection for the unique, for quality in craft and design — and with his unexpected personal touch.”

The New York store, appointed with funky furniture by Gaetano Pesce and black-and-white photos by Elliott Erwitt and Rodney Smith, is the latest expansion volley in the U.S., following last year’s opening of units in Miami’s Design District; South Coast Plaza in Costa Mesa, Calif., and a shop-in-shop at Bergdorf Goodman Men, which has the wholesale exclusive in America.

The latter project, Arnault said, has “well exceeded our expectations” and underpins his bullish stance on Berluti’s prospects in America, where the brand has been present since 2005.

“The U.S. market has always been strong to rebound after crisis, and the men’s segment is probably outpacing the global luxury industry trends,” he said.

Heavy investments in Berluti, along with Fendi, was one factor that weighed on profitability in the second half of 2013, LVMH noted last week in disclosing its full-year results. Profit from recurring operations in fashion and leather, which also bore the brunt of a weak yen and dollar, fell 4 percent last year to 3.14 billion euros, or $4.17 billion, as reported.

Antoine Arnault hinted, however, that he would take the foot off the accelerator.

“We rolled out a significant number of stores these past two years to install flagships in strategic capitals,” he said. “In 2014, we will consolidate this network and take a more organic approach to our network development with less than 10 store projects worldwide.”

Asked if the investments would continue to weigh on Berluti’s profitability, he replied: “We should reach break-even in two years.”

Berluti tapped Tokyo-based French architect Gwenaël Nicolas for the Madison Avenue store, for which he employed elements used in other flagships, including leather wall panels with special patinas and contemporary furnishings by Franco-Portuguese design duo Oitoemponto. These include reworked classics such as a Louis XV chair or Josef Frank console displayed alongside their modern interpretations. As in the Rue de Sèvres flagship, vintage objects and artworks are intermingled, creating an atmosphere reminiscent of a gentleman’s club.

A limited-edition Formula 500 “trolley,” or travel suitcase, available in a rainbow of different patinas, is exclusive to the Madison Avenue location. The suitcases retail for $8,900 and up.