The brand has plans to introduce a full bespoke clothing service at its new London flagship. 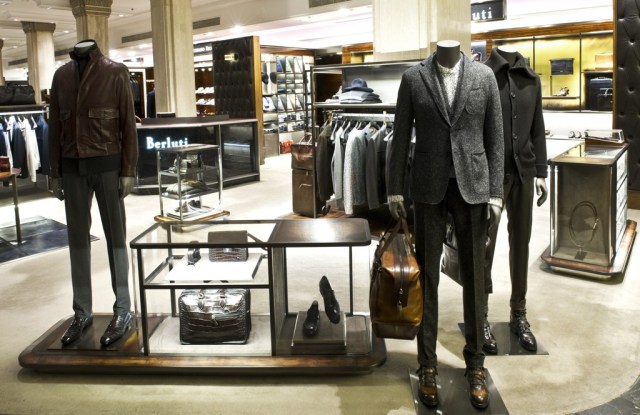 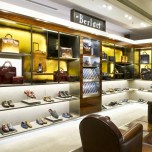 LONDON — Berluti is throwing down the tailored gauntlet with plans to introduce a full bespoke clothing service at its new London flagship, which will be located a few feet from Savile Row, on Conduit Street.

The new store, which is already under construction, is set to open in the first half of 2013 and is just one of the brand’s myriad European projects.

He sees apparel, which Berluti introduced for fall under the artistic direction of Alessandro Sartori, as a gateway to the brand. Berluti, which is owned by LVMH, is best known for its luxury men’s footwear.

“When we floated the idea of apparel to our existing customers, all they could say was, ‘Please! Now!’” said Arnault from a suite at the Bulgari Hotel in Knightsbridge. At the same time, he believes apparel will be a draw for new customers. “People often enter the brand, get interested in it through apparel, and then a virtuous circle is created.”

The Harrods shop-in-shop carries footwear, accessories, and ready-to-wear and is the second Berluti in-store unit to open after one at Hankyu department store in Osaka, Japan. It spans 1,047 square feet and includes features from the new store design, including shiny and matte wood, and leather and glass panels and details.

“We fell in love with the collection from the moment we saw it — our clientele is discerning, and there is a strong demand for uberluxury product for men,” said Jason Broderick, men’s wear general merchandise manager at Harrods.

“Increasingly, we are seeing that men are buying in to beautifully crafted investment pieces that will be treasured for years to come.”

Asked about sales at the new Harrods unit, Arnault said they were “above expectations. We are extremely proud of the results.”

During dinner at the store to mark the opening of the shop, guests including Bryan Ferry, David Gandy, Eva Herzigova and David Collins gathered on the terrace of Ladurée for cocktails before sitting down at a long table decorated with the wooden lasts of famous Berluti customers such as Roman Polanski, Yves Saint Laurent, François Truffaut and Isabelle Adjani.

Arnault joked that Harrods’ chief merchant Marigay McKee was forced to take the original appointment with him because of his last name, and despite the fact that he and Sartori showed up with just “two pairs of shoes and a couple of sketches.”

The Harrods shop-in-shop is Berluti’s first flag in the ground in London. Over the next few weeks, the brand plans to open a temporary store on New Bond Street for six months until the work is finished on the Conduit Street flagship.

Berluti’s bespoke clothing will be made in Paris at Arnys, the French men’s wear company acquired by LVMH earlier this year. The new Paris flagship will be on the site of the Arnys store on Rue de Sèvres.

LVMH hung on to the Arnys tailors and plans to press them into action on behalf of Berluti.

Sartori said during the interview that the plan is to offer between 15 and 20 looks from the 40 presented each season as bespoke options. Berluti will offer 50 different fabrics, and will also make shirts, ties and sportswear as well as suits.