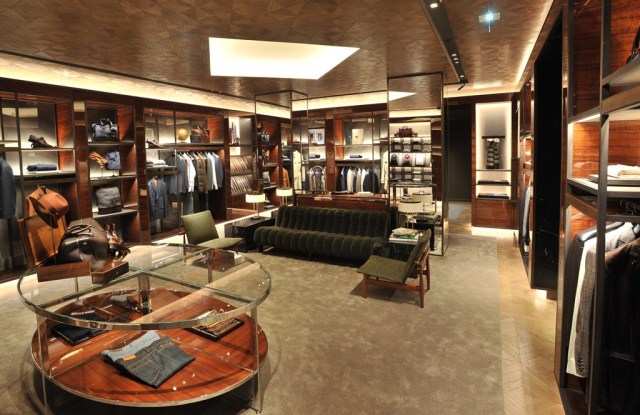 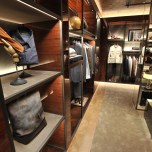 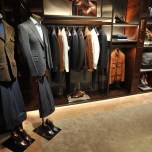 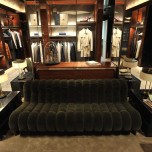 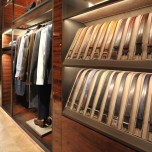 PARIS — From quirky, illustrated windows depicting Parisian scenes straight out of a Jacques Tati movie to the antique paintings and furnishings dotted throughout the store, Berluti’s new Paris flagship is loaded with personality.

“Between a gentleman’s club and a store,” Berluti chief executive officer Antoine Arnault said as he led WWD on a tour of the 4,300-square-foot unit, which opens today at 14 Rue de Sèvres.

“People come not only to shop, but to share a moment with us,” he said, noting that Berluti clients spend on average 45 minutes per visit, well above other luxury retailers.

Berluti’s largest location in the world marks its launch into bespoke tailoring, following the acquisition last year of Arnys, the landmark Left Bank men’s wear purveyor it acquired for its prime real estate and savoir faire, taking on about a dozen of its skilled tailors.

Customers can order hand-made suits — and sportswear, too — from a VIP salon with a view via glass doors into the atelier, with its oak cutting table and bolts of fabrics. Prices for what’s dubbed the “Grande Mesure” service start at about 6,500 euros, or $8,600 at current exchange, for a suit.

Designed by architect Gwenaël Nicolas, the store blends elements telegraphing Berluti’s roots as an haute cobbler — including streaky brown leather walls and parquet ceilings — with original furnishings from Arnys, such as the leather-topped Louis XV desk that sits at the entrance under a framed movie poster for Tati’s 1967 film “Playtime.”

Founded in 1933 and best known for its handmade suits and tab-collared Forestière jacket, Arnys dressed the likes of Pablo Picasso, Ernest Hemingway and, more recently, Pierre Bergé and François-Henri Pinault. It was a magnet for politicians and intellectuals due to its proximity to government offices and the influential college Sciences Po.

Berluti reprised the Forestière in slimmer cuts and multiple fabrics — double-face cashmere, flannel and velvety corduroy — and Arnault unbuttoned one to show off a large, retro label identifying it as a design by Le Corbusier for Arnys from 1947.

Arnault stressed the store is 100 percent Berluti, meant to exalt its expansion into a luxury lifestyle house for men under creative director Alessandro Sartori. While footwear and leather goods get pride of place on the ground floor, ready-to-wear gets salons on the main and first floors — the former for leisure and casual; the latter for tailoring through the tuxedos.

“Sales are on the right track, and we’re welcoming a lot of new clients,” Arnault said. Some Berluti footwear aficionados, meanwhile, “have completely embraced the development of the new categories and some of them now wear Berluti as their wardrobe,” he added.

While rtw and leather goods like its Un Jour (“one day,” in English) briefcase are the fastest growing categories, Arnault stressed that footwear remains “at the center of our strategy.”

To wit: One of the store’s unusual features is a patina bar, where clients can bring their Berluti shoes for repairs or a serious polish.

The two-story, corner boutique boasts six large windows and is located across from the Hermès Left Bank flagship and a stone’s throw from the luxury department store Le Bon Marché, which, like Berluti, is owned by LVMH Moët Hennessy Louis Vuitton.

Arnault said the shopping strip, soon to welcome an Omega boutique and other luxury tenants, is on the way up while maintaining its residential character.

In early December, Berluti is slated to open a 5,400-square-foot unit at 9 Rue du Faubourg Saint-Honoré. It has a third Paris location on the Rue Marbeuf.

Capitalizing on a vibrant market for high-end men’s wear, Arnault has been busy opening new or refurbished locations for Berluti, including important locations in Tokyo, Hong Kong, Shanghai and London. Key openings in the coming months include Milan, Costa Mesa, Calif., and at Bergdorf Goodman and Madison Avenue in New York. The firm should end 2014 with 45 directly owned stores.