Bernard Arnault on the Long-Term View 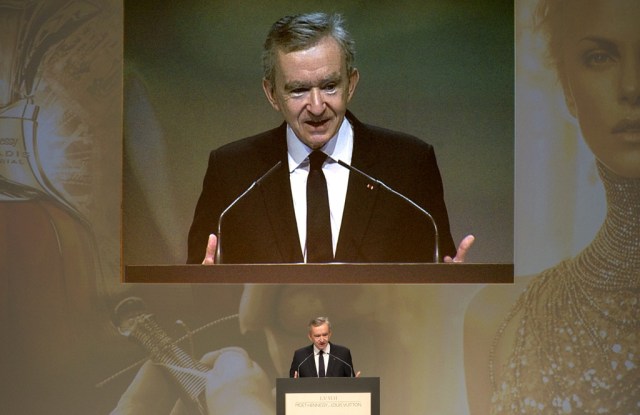 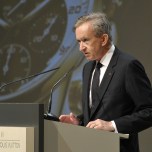 This story first appeared in the April 6, 2012 issue of WWD. Subscribe Today.

“It is we who create the future of our business,” Arnault said in an upbeat, at times professorial address that held an audience numbering more than 1,000 rapt in a vast hall at the Carrousel du Louvre here. “It’s not what we will do today, but what we will do in 10 to 15 years.”

LVMH’s chairman and chief executive officer said he expects the good times to continue rolling, noting that business in the first quarter was better than the fourth quarter of 2011, when sales advanced 20.4 percent to 7.35 billion euros, or $9.92 billion.

“We are relatively confident for the development of our business in 2012,” he said, flashing a graph showing LVMH’s stock rising 165 percent since Jan. 1, 2009, versus only 5 percent for the CAC 40.

Again turning to the burgeoning Internet industry to illustrate dramatic reversals of fortune, he noted that Apple Inc., a company once on the verge of bankruptcy, has roared back to become one of the most highly valued companies on the planet. By comparison, Yahoo Inc. finds its once rosy business withering, while search-engine rival Google Inc. roars ahead.

Arnault reminded shareholders that LVMH, the world’s largest luxury conglomerate, grew out of a troubled textile group called Boussac that he acquired back in the late Eighties.

France’s richest man acknowledged the debt woes and austerity measures that continue to hobble Europe’s outlook, but stressed that LVMH, which exports roughly 80 percent of its production, is well-positioned to take advantage of global growth, projected to tally 4 percent this year.

Just back from a trip to Vietnam, he marveled at the capitalist nature of the communist nation. “French products are particularly appreciated there,” he related, smiling broadly. “There is a dynamism in this country I can foresee for the next 10 years. It has a very interesting growth potential.”

Indeed, he noted Dior would be the next of his brands — which range from Givenchy and Fendi to Zenith and Bulgari — to plant stores in the country, which has a population of about 90 million people, and a pair of Louis Vuitton boutiques: one in Ho Chi Minh City and one in Hanoi.

Yet he also highlighted victories in mature markets, boasting that Dior’s J’adore remains the best-selling perfume in France for the second year running. He also touted a vigorous rebound in disaster-stricken Japan and noted that it remains a “very important market for us,” albeit “less dynamic than China.”

He cited “remarkable growth” at DFS in Asia, marveling at not only the number of shoppers at its locations, but their increasingly sophisticated selections. While such duty free outlets have a reputation for selling mainly liquor and cigarettes, he said Chinese clients in Macau, for example, come in search of perfumes, jewelry and leather goods.

“In this business, you have to be patient,” he stressed, also noting that some of the group’s medium-sized fashion brands, including Loewe, are now showing strong growth potential.

The Dior meeting was a brisk affair, given the Dior fashion house’s equally strong performance last year: Profits more than doubled to 85 million euros, or $118.4 million, as sales in its own stores advanced 28 percent.

Dior noted that it keeps trimming back its wholesale business: It represented only 12 percent of revenues last year, down from 15 percent in 2010. Last year, 84 percent of Dior sales were generated in its own boutiques.

The weight of fast-growing Asia also continues to grow, accounting for 45 percent of Dior’s sales last year. Europe and the Middle East represented 46 percent, while the Americas only 9 percent, down 1 percentage point from 2010.