Much has happened in Beth Bugdaycay's world in the past two months.. 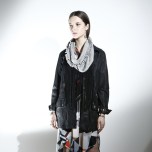 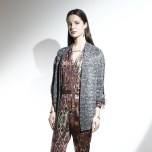 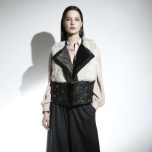 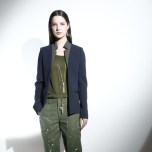 NEW YORK — Much has happened in Beth Bugdaycay’s world in the past two months. In December, she left Rebecca Taylor, the company she cofounded with Taylor and presided over as chief executive officer for 18 years. Within weeks she had her new venture, Foundrae, up and running with a staff of eight, and three categories — ready-to-wear, fine jewelry and shoes — ready for the February fall wholesale market. Her first retail store is under construction and will open on Lispenard Street here in July.

“I’m a decision-maker,” said Bugdaycay, explaining how so much came together in so little time. It helped that she had experience running a company, deep production relationships, not to mention real estate connections. Foundrae’s temporary office/showroom is the model apartment in the building, owned by Bugdaycay’s real estate developer husband Murat Bugdaycay, who is also a partner in Foundrae, and which will house her future store and apartment — they’re taking the penthouse of the seven-unit property.

When Murat bought the building three years ago, living and working in the same relative space was not part of the plan. But it’s become more than coincidence and convenience; it’s part of the Foundrae company culture, the very personal and new lifestyle Bugdaycay wants to associate with her brand. “We wanted to work in a way that was more meaningful for us and also allowed us to be more accessible to our family,” she said of partnering with her husband. “We wanted to do it together.” Ariana Huffington would approve.

After years of approving budgets and running operations, Bugdaycay wanted to fuel the more creative side of her personality. She is not ceo of Foundrae, but creative director and is focused on not confusing the roles. Murat is chairman of the new line and they’ve hired Sara Whitney, formerly director of merchandise at Intermix, as president. “I needed to make sure I gave myself the space to change my role,” said Bugdaycay. “Otherwise I can be ceo all day long. I’m used to it.” That said, she has set the baseline policies: two hours per week of exercise during work hours; eight hours a month of community service; a relatively lax point of view on working from home.

Bugdaycay makes a convincing case for the warm, fuzzy way to leave your business partner and keep your friendship intact. She and Taylor sold the company to Kellwood Co. in 2011, and as she points out, a three- to five-year run is normal for an incumbent ceo in such situations.

“Was I comfortable at Rebecca Taylor? Absolutely. Why wouldn’t I be? Surrounded by people that I really loved, that I handpicked myself,” said Bugdaycay, preemptively dismissing the question that looms when ceos leave the companies they start after nearly two decades on the job. “But it’s like, all of a sudden is that enough? Eighteen years is a really long time. I just wanted something else.” She originally gave notice in September, but Kellwood and Taylor convinced her to stay on through December. “We’re not competing against Rebecca in the slightest,” said Bugdaycay.

Whereas Rebecca Taylor is strictly contemporary, Foundrae is at an opening designer price point: $350 retail for shirts, $500 for dresses, up to $2,000 for leathers. Aesthetically, the collection works with the vocabulary of current trends — reversible shearling vest with tough hardware on it (that can be zipped off and worn cropped and plain); printed jumpsuits; cargo pants splattered with paint; culottes, and tomboyish blazers — and finishes them with a crafty, artisanal touch. Bugdaycay has also invented her own lexicon, literally. A series of symbols can be customized and embossed on some of the items of clothing and many of the pieces of jewelry, which are designed by Leeora Catalan, formerly of Noir. The number 8 stands for karma, a crown on top of a pyramid means achieving dreams, stars mean divine energy and guidance, a triangle upside down stands for water and femininity. There will be an index of meanings. Customers will be able to customize their jewelry and clothes in the store; for wholesale the language will be fixed.

“Someone might just buy this because it’s a cool leather jacket,” said Bugdaycay, handling a black leather shirt jacket with a deer antler charm and a series of the Foundrae lexicon printed on the inside of the cuff in gold. “But then when you flip this up, they realize they’ve got something that is beautiful and meaningful and will hopefully inspire them.” Bugdaycay has long had a fascination with mystical things and empowerment but stops very short of preaching. “We don’t want people to think this is some kind of religion,” she said.

The collection’s target audience is Bugdaycay and her peers, a group she considers ignored by fashion to some extent. “I’m 42,” she said, segueing into a story about her (former) love of wearing vintage. In the Nineties, the sixtysomething owner of the showroom she worked with for Rebecca Taylor told her that at a certain age, women have to retire their vintage, lest it look like it’s been hanging in their closets. Two years ago, a young editor from Turkish Vogue complimented Bugdaycay on her favorite vintage Lurex jumpsuit. “I said, ‘Thanks, it’s from the Seventies,’ and she goes, ‘I can’t believe it still fits you,’ ” recalled Bugdaycay, who was born in 1972. “Murat said, ‘It’s time to put away your vintage.’ I thought, what in the world am I supposed to wear now?”