In a miserable global economy, the Hugo Boss chief executive officer has led the company to record growth. Here’s how. 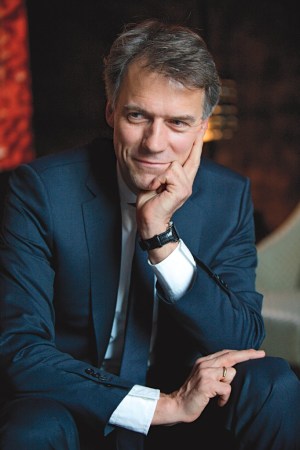 If you’re hoping to catch a glimpse of Claus-Dietrich Lahrs tearing down the slopes, relaxing at home with his family or taking a well-considered swing on one of his favorite golf courses, forget it. For as cordial and gracious as the chief executive officer of Hugo Boss may be, Lahrs makes it a strict policy not to mix private and professional matters.

“We don’t support personal p.r.,” he says bluntly. “I only speak about Hugo Boss, not myself.”

Fortunately, that leaves plenty to talk about. Backed by two years of record sales and healthy earnings, the German apparel giant recently raised its midterm guidance for 2015. Boss now projects sales of 3 billion euros, or $3.9 billion, in 2015, a sharp increase over the previously forecast 2.5 billion euros, or $3.3 billion, and its EBITDA (earnings before interest, taxes, depreciation and amortization) before special items is now expected to reach 750 million euros, or $976 million, up from 500 million euros, or $651 million. “This certainly doesn’t reflect what is currently going on in the world economy, nor does it reflect what’s going on in the premium luxury fields,” Lahrs notes. “But we are taking a bigger market share against the competition, not only in men’s wear but also with women’s wear and accessories. And we are gaining market share in very mature markets, like Germany, or very competitive markets like the U.S.”

Just back from a trip that included stops in New York, London and Asia, Lahrs is about to leave Boss headquarters for “our famous Betriebsversammlung,” an assembly of the company’s 2,500 employees in Germany. “It’s an important moment, our chance to tell them about the year and what we expect in 2012,” he says.

Lahrs has been addressing these topics a lot lately, quietly but authoritatively making the case for Boss and outlining the group’s five-year strategy in analyst meetings and in TV interviews on stations such as Bloomberg and Sky. The 48-year-old has been at the company’s helm since January 2009, having previously served as president of Christian Dior Couture in Paris and in other executive positions at Louis Vuitton in the U.S. and Cartier in Europe.

In 2009, as now, Hugo Boss was the undisputed market leader in premium men’s wear, but it wasn’t the easiest moment to step in as ceo. The company’s strategic realignment and special expenses were eating into earnings, and the global financial slowdown in the wake of Lehman Brothers’ bankruptcy depressed both sales and net income. And yet Boss’ performance during that period reflected Lahrs’ steadiness and confidence—qualities still evident in the face of current economic turbulence and what he predicts will be a challenging 2012. “First, we managed to get through the crises less touched than other brands,” he says. “And second, we managed to get back into a very dynamic momentum faster than other companies.”

By 2010, Boss hadn’t merely bucked the crisis; it had the best year in the group’s history, with currency-neutral sales hitting 1.73 billion euros, or $2.3 billion, and net income surging 82 percent to 189 million euros, or $251 million. (All dollar figures are converted from the euro at an average exchange rate for the year.) The company expects to close 2011 with currency-adjusted sales growth of 15 to 17 percent, and a 25 to 30 percent increase in EBITDA before special items.

Not that the chief executive puts a narrow focus on numbers. “Lahrs has managed to find the balance between being an economically minded strategist and a grounded leader,” says Willy Oergel, chief operating officer of the Stuttgart-based fashion retailer Breuninger. “He’s a visionary who’s always close to those he operates with.”

Driving Boss’ success has been the shift from “a traditional wholesale model with some related retail activity to a professional retail model with continued wholesale activity,” says Lahrs. “When you take the final consumer as the decision- maker for what you do internally, you start to see things very differently.”

The insights Boss gleans from its stores—via sell-through analysis and customer-relationship management, or CRM, data—have produced a clearer picture of consumer expectations. In response, the company has fine-tuned its approach to everything from design to shipping, in ways that benefit not only Boss but its retail partners as well, according to Lahrs.

Boss’ directly operated retail business is expected to grow from its current 40 percent share of sales to 55 percent by 2015, and to generate 70 percent of medium-term growth. The company plans to add 50 new stores annually to its retail network, which in the fall included 219 freestanding stores and 290 shops- in-shop. Meanwhile, there’s a new retail concept in the works, to be unveiled in the Hugo Boss store on Paris’ Champs- Elyseés in 2012. “It will deliver a very warm, luxurious, feel-good atmosphere,” the executive says. What Boss has aimed to do with product—increasing the brand’s luxury quotient with the top-of-the-line Boss Selection and upgrading the core Boss Black collection—“is what we’re currently doing with our stores.”

Lahrs himself is a natural representative of the various Hugo Boss labels. With his trim frame, he can and does wear Hugo; his personal elegance seems ready-made for Boss Selection, and the Boss Green label complements his genuine passion for golf. In short, he embodies the brand. Moreover, anyone who’s had the opportunity to work through collections with him will tell you he’s enthusiastic and highly knowledgeable on the subject of product. “Boss has never had a ceo able to combine retail and product savvy,” a company insider maintains.

“Product is always the beginning of a successful company, be it in fashion, technology, service,” Lahrs says. “Once you have the product right in regard to what the consumer expects, you’ve already resolved a big portion of the total task.”

Boss sinks about $65 million annually into developing collections, if you count all phases, from the work of the creative teams in Germany and Switzerland to the presentation in Boss showrooms. The company also spends a bundle on major events to underscore the differences between the group’s Boss Black, Boss Selection, Boss Orange, Boss Green and Hugo labels.

Indeed, while retail expansion is the first pillar of Boss’ five-year growth plan, strengthening individual brand identities is the second. To that end, the Selection label is now shown at Pitti Uomo, where it’s seen by “all the important wholesalers and all the important press, in a very special environment,” Lahrs says. “We are by far the biggest brand in Florence, showing a very luxurious statement to underline and demonstrate how serious we’ve become about luxury tailored men’s clothing and sportswear.”

Boss Black men’s and women’s wear, on the other hand, took the spotlight at Hugo Boss’ New York runway show in September. “Here we want to send a strong message to say this is Black, while at the same time we’ve decided to stage an important show in Beijing of Boss Black and Boss Selection to make sure the strong distribution we already have there is supported by strong communication.”

Still, the collections may vary from one global market to the next. Take Boss Selection, a $65 million business that is expected to hit $130 million by 2015. In Europe, and to some extent in America, this elite brand is helping Boss reconnect with former Boss Black customers who gravitated to other labels as they traded up. In China, however, Boss Selection has played a key role in the company’s successful entry into the market. “[In China] it’s about shaping the conception of the consumer with high disposable income, which is why Selection is so important there,” he explains. Boss recently moved to offer the luxury-oriented Chinese customer Selection sportswear, completing a full range that includes shoes and accessories.

Not surprisingly, making the most of growth potential in China, as well as the United States, is the company’s third strategic focus. In the first nine months of 2011, sales in China jumped 73 percent to 125 million euros, or $175.9 million, while in the U.S., sales for the period rose 23 percent to reach 249 million euros, or $350.5 million.

Lahrs is particularly enthusiastic about the rollout of Boss Black to 17 leading Neiman Marcus stores. “I have
a very strong respect for Neiman Marcus and how they treat the customer and nurture the high end of the market,” he says.

The executive’s demeanor has often been likened to that of a statesman. As a close colleague notes, “He knows what he wants, but he also really listens and can rethink. His approach mixes being authoritative with a willingness to provoke reactions from those about him.”

As Lahrs sees it, this is critical for a global brand. “Our company is not a central decision-making entity,” he says. “Certainly, it’s driven by what we do here in Metzingen, in terms of product design, the retail concept, marketing and communication, sponsorship and the like. But it’s even more important to really listen to signals we receive from important marketplaces.”

With that in mind, Lahrs and other key Boss players spend about half their time on the road, traveling to markets where Boss already does business and where new opportunities beckon. The rapid yet highly organized growth in China fascinates Lahrs, but he remains a strong believer in the U.S. “When I lived in New York 10 years ago, all the important magazines were calling Germany the sick man of Europe…and look at Germany today.

“To be sure, America is facing issues and problems,” he continues, “but I’m convinced it will come back very strong. It’s extremely exciting to see how the team there is growing market share in one of the most challenging and promising markets in the world….The U.S. is still the most important consumer market in the world, and it will take China years to come close to that.”

For Hugo Boss, however, it all comes down to market share—and Lahrs maintains that the trend toward consolidation gives strong global players an edge. “I started my professional career in the luxury sector with Cartier, a leader in jewelry and watches,” he says. “And if you look at what made Cartier so successful, it was their ability to take market share from smaller players in each market.

“We’re currently seeing a similar trend in men’s wear,” Lahrs adds. “Which doesn’t mean local players like Savile Row will disappear. But by nature the market will be more consolidated, and it will be about taking brand strength and assets to a world stage. Not so many brands have the marketing, distribution and financial muscle to send a message to the world, and I think that will help us grow.”