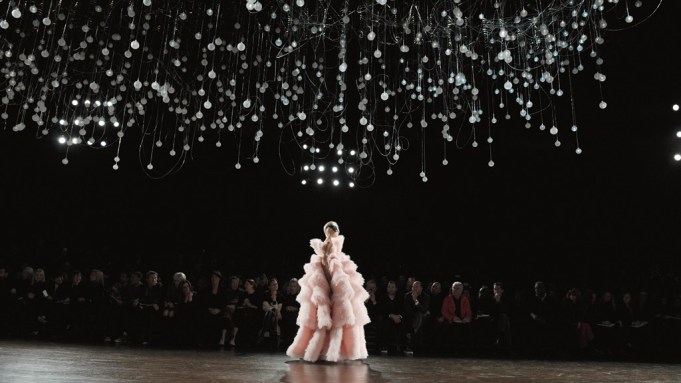 Explorations of volume found precedence in the spring collections (see for example, Louis Vuitton), but for fall more designers were emboldened to explore the opposite of skinny. Alexander McQueen’s Sarah Burton did so with a glorious tiered and ruffled reverie.

NEXT: Romancing the Sweater >>

Raf Simons ended his tenure at Jil Sander by proving the captivating power of calm while setting the bar sky-high for his Dior debut.

A GIRL, HER VALET AND HER BAGS

Why should a girl carry a fabulous bag when she can enlist a personal valet to schlep several? That was Marc Jacobs’ ruse at Louis Vuitton, the better to flaunt his spectacular display of leather (and fur and fabric) goods to pair with clothes that evoked Edwardian romance.

With mirrors, low light and a surrealist approach, Alexander Wang proved that bright white fringe can have all the edge of black.

Call it functional flamboyance. Intricate avian embroideries, gypsy trimmings and prints rooted in Eastern inspirations will look as intriguingly chic off the runways as they did on.

Long known as a sartorial expression of biker bravado and youthful rebellion, black leather softened up—relatively speaking. Lean, graceful cuts and pairings with delicate fabrics retained a soupçon of aggression—enough to say the woman is pretty, but powerful, too.

Several designers wrapped their runways in drama of the caped variety. At Gucci, Frida Giannini drew from 19th century romanticism for a look that was part poetic, part pirate.

It wasn’t exactly clear how Kate and Laura Mulleavy’s stated inspiration, Australia of yore, informed their Rodarte collection. But no matter. A vague Thirties attitude permeated the air, and many of the clothes delivered an unusual hybrid: innocence with attitude.

Karl Lagerfeld journeyed to the center of the Earth and discovered a rocky world of anthracite caves, amethyst obelisks and quartz stalagmites. Dramatic, indeed, but the find that will resonate most powerfully was a newly sporty Chanel built around a gold mine in pants.

In a season marked more by individuality than trends, fabrics made for one of the clearest vehicles for self-expression. It’s a given that at the highest levels of fashion most fabrics are exclusive to a house, and many of those are custom. Fall saw countless amazing fabrics, often resulting from intense research and multiple steps in the production process. Sometimes, imagination trumped reality: Mary Katrantzou used real No. 2 pencils to deliver No. 1 runway-only wit. More often, designers channeled their attentions into developing fabrics intended to translate to their commercial collections, once issues of weight, and in some cases, cost, are resolved.

Demonstrative fabrics always feature prominently on Consuelo Castiglioni’s Marni runway. This time, she broke her signature geometry with a bold yet romantic cotton and Lurex floral jacquard. “I love its density, but rigorous style,” she says.

Proclaiming themselves bored with wool, Jack McCollough and Lazaro Hernandez of Proenza Schouler focused on cotton and leather, developing almost all of their fabrics themselves. Especially for the runway seasons, it’s important to view the textile as a crucial element in the creative process, Hernandez explains. “This is much more of a show, an exercise in creativity, an exercise in design,” he says. “Pre-collections are more about clothes.” They thus developed textured poplins, kimono fabrics and various treatments of leather.

One stunner: A three-color weave that was, McCollough says, “Scored and perforated and then shot through with a contrast leather. It’s a navy leather and a black leather. They are sort of scored with squares,” he explains. “[They were] put one on top of the other, and then woven with white.”

Marc Jacobs, a long-time devotee of intricate tweeds and embroideries, each season pushes himself and his studios to achieve new levels of surface wonder for both his signature and Louis Vuitton collections. At the latter this season, he went for a “more humble and naïve” approach to craftsmanship than in spring’s carrousel extravaganza. The level of work involved was no less intense. On one fabric, ponyskin was integrated into a floral plaid; on another, ostrich skin was bonded to Shetland and finished with big jeweled broaches for buttons. “We embellished, embroidered, trimmed, appliquéd, beaded,” Jacobs says, adding the obvious. “There’s a lot of work [here].”

The development process at Marc Jacobs, where the fabrics were bold and fanciful, was no less intense. Specially commissioned yarns were woven and sent to one studio for sequining and another for bonding. Silk squares destined for patchworks were hand-frayed by interns, assembled in degradés and sent to Italy for embroidery. A wool yard was embroidered on tulle, sequined and needle-punched with a knit. After describing several such complicated fabrics, Jacobs cuts himself off with a note to self: Next season might be all bias georgette. He likens that faux resolve to the way a good friend of his felt when she was involved in an intense project of her own. “When Sofia Coppola was doing Marie Antoinette,” Jacobs recalls, “she said, ‘I’m going to do a documentary next. I can’t deal with 500 extras.’”

CALL OF THE WILD

Animal imagery populated the runways in diverse incarnations, from photo-realistic to quirky and cartoonish.

No designer working today has inspired her peers more often than Miuccia Prada. With her optically frenzied prints, she showed that she, too, can peruse the house archives—and make one of her signatures completely new.

Structural studies made for a significant motif throughout a highly diverse season. Who knew there were so many ways to work a peplum?

Lana, that is. Only today’s Sweater Girls take liberties in the name of sophistication, stretching traditional motifs into dress looks as appropriate for the office as for off-duty.

In season with a lot going on, moments of calm proved alluring. At Valentino, Maria Grazia Chiuri and Pierpaolo Piccioli worked a gentle restraint while Bottega Veneta’s Thomas Maier went plain with power.

Once upon a time, a lady was not seen in public sans chapeau. While those days are unlikely to make a full-force comeback, by showing looks that ranged from the broad brim to the pillbox, many designers made a compelling case for the return of the hat.

Conformity matters in the military—except when the strategists are fashion designers. Fall options ranged from no-nonsense epaulet dresses to elaborately embroidered regalia.