Marc Jacobs has an affection for boldly shaped silhouettes, and he showed it with the overscaled versions in his remarkable fall collection for Louis... 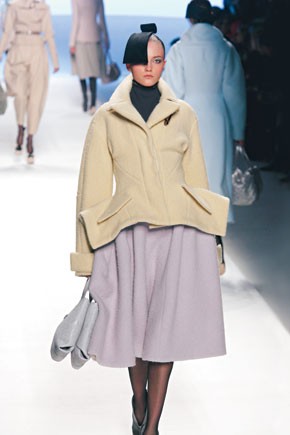 Marc Jacobs has an affection for boldly shaped silhouettes, and he showed it with the overscaled versions in his remarkable fall collection for Louis Vuitton. Here, a jacket with pleated details at the hips and a full skirt, both in the thick, cozy fabrics he favored throughout.

Louis Vuitton: Richard Prince? He and his high-voltage artwork are so last season. At least on the Louis Vuitton runway (though certainly not at retail), where, on Sunday afternoon, Marc Jacobs showed a fabulous, brash collection that took a strict turn from the madcap artwork of spring. Now there’s nary a cartoon character, nurse, nor painted stroke in sight. Rather, the collection was all about structure, a point the designer alluded to with his installation outside the Cour Carrée: a vast grid of construction-site scaffolding.

As is often the case, with the hindsight of a completed season, a theme Jacobs put forth in New York, that of scaling back, now looks huge. We’ve seen it every which way including boring, which, mercifully for the fashion-weary, Jacobs doesn’t do. But he does do fashion-improbable contrast, and these clothes were packed with it, on one hand stripped of decoration and on the other, structured to the point of flamboyance. Jacobs took elements of classic French chic and exploded them, along the way paying homage to Montana and Mugler, but with an aggression that skewed pretty pastel. He started with thick, cozy fabrics that screamed fall-winter: bouclés, blanket cashmeres, even wide-wale corduroy, and worked them with a deftness suited to far lighter materials. Zip-up coats and jackets molded seamlessly to the torso; a skirt flaunted major roller-coaster curves on each side. Throughout, Jacobs sculpted, peplumed and blousoned inventively, incorporating bold collars, asymmetric swirls and endless hip action, including megapleat pants and two looks that featured uncovered pannier wiring. The jewelry was similarly bold, in a sculpted, industrial vein, and the bags, ultrachic, clean shapes in embossed skins slung on snake handles.

Between the fabric weights and the ample constructions, some of the clothes require a reed-thin body. But they delighted with visual bravado and, in a season with far too much to snooze over, the aura of risk.

Nina Ricci: Apparently, Nina Ricci’s spring feathered-and-ombréd nymph has emerged from her post-rave euphoria a bit dazed and confused. Indeed, after last season’s ethereal street stunner, Olivier Theyskens’ fall collection felt like one of transition, its direction unclear. In his studio the day before the show, Theyskens spoke of “an ironic moment” from a childhood stint in England when the dark rock of the early Eighties offered a counterpoint of sorts to illustrations he remembers from a children’s book. “I connected with that moment,” he said. “But I haven’t yet found the name for the aesthetic.” Clothes-wise, he translated that starting point into undone sportswear with a hint of rock ‘n’ roll that, like its inspiration, was unresolved.

Which is not to say there weren’t some beautiful clothes. The look was singular: Jackets worn over silk chiffon blouses, skinny silk pants and eventually a few printed dresses, all of it rumpled like clothes that, as Theyskens said, might be found in an attic. Still, it was anything but the frumpy fur-collar things that were all the rage a few seasons back. Rather, the slim silhouettes were modern and arty in their slender curves, strongest in the endless array of gorgeous jackets. There were leather motorcycles and broad-shouldered silk blazers and waistcoats that cut away into long tails. Some were lined in shimmering velvet, and all flaunted interesting curved seams that could intrigue a true cut connoisseur.

Any attic-like dust and must came via the dour palette of orange, copper, mauve — colors that aren’t exactly universal in their appeal or wearability — and the all-too-rare powder blue. To wit, such shades made the already fussy silk hammer pants an even tougher sell. Likewise for Theyskens’ typically breathtaking evening gowns, where the same dreary hues detracted from their beauty. But then, waking a sleeping house like Ricci is an exhausting struggle. And at the end of a very long week and a very long season, it’s easy to sympathize with fatigue.