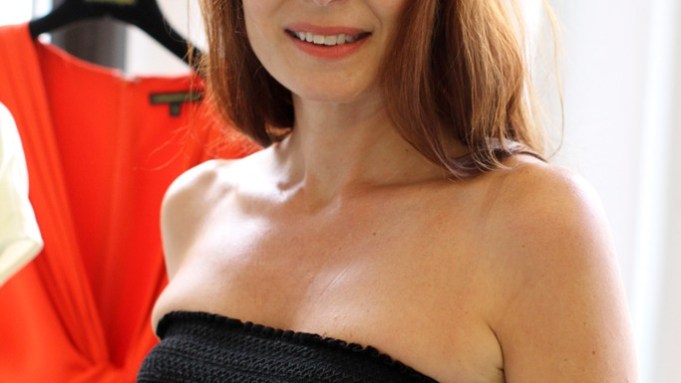 Catherine Malandrino has widened her circle of investors.

On Monday, Bluestar Alliance LLC said it had signed a definitive agreement to acquire the Catherine Malandrino brand and intellectual property assets from Tahari ASL LLC for an undisclosed sum. They have established a new joint venture that will be majority-owned by Bluestar, in partnership with Tahari ASL.

“It’s a more open family. It will help me to realize the full potential of the brand,” said the French-born Malandrino in an exclusive interview. “Everybody feels very comfortable in the partnership,” said Malandrino, who said she will also have a stake in the company.

Malandrino said the new investment from Bluestar will allow her to reinforce the Catherine Malandrino image through marketing and advertising, open more freestanding stores in the U.S. and internationally, and expand her global business through licensed categories such as home and accessories.

“This is an exciting acquisition for Bluestar,” said Joseph Gabbay, chief executive officer of Bluestar, which will have operational responsibility for Malandrino. “The Catherine Malandrino brand is a perfect fit with our current portfolio. There is clearly a need in the marketplace for a seasoned brand which can be taken globally into other categories beyond apparel, such as accessories and home.” He said Bluestar has the ability to react to the needs of the retail community while delivering the right licensing partners and a creative and financial commitment to marketing.

Malandrino brought Tahari and Levine into the fold two years ago in an effort to strengthen the company’s infrastructure and expand her brand at retail and wholesale, add new categories and grow internationally. Malandrino was able to tap into Tahari and Levine’s resources in both Asia and Europe, as well as their business expertise. The designer said that while the partnership had many advantages, she realized the company could benefit from additional investors.

“They were not only financial [investors], they were strategic,” she said. Over the past two years, Levine and Tahari successfully helped her launch Catherine Catherine Malandrino, a diffusion line which is sold at such retailers as Lord & Taylor, Dillard’s and nordstrom.com, as well as specialty boutiques. “Before we were limited to a more urban woman who bought designer clothes,” said Malandrino, who started her company in 1998. She said the diffusion line, which was launched for spring 2013, has wholesale volume of between $15 million and $20 million, while the designer collection generates wholesale volume of around $25 million and is sold in such stores as Bergdorf Goodman, Saks Fifth Avenue, Neiman Marcus and Bloomingdale’s, as well as on her Web site, catherinemalandrino.com, and through international accounts.

Several months ago, Malandrino began talking with Tahari and Levine about expanding her designer collection and the bigger picture for the company. She said that while the diffusion line was very successful, she was eager to develop the full brand. She said Tahari has given her a lot of good advice, but his priority is his own brand. “He has been building an empire. I learned a lot [working] next to him in the last two-and-a-half years. He opened the door of his company to me and it was priceless,” she said. Tahari’s advice has been more strategic, she said, while Levine’s was more operational. “We decided it was the right timing to bring another level of investor who understands and has a big vision of building a global brand,” said Malandrino.

“We were in a position where we had to do licensing, but we didn’t have the wherewithal. This is where Bluestar came to the table,” said Levine.

Malandrino said she began speaking with Bluestar about two-and-a-half-years ago, before striking a deal with Levine and Tahari. But once that deal was in place in 2011, it was no longer necessary to continue discussions. Malandrino started talking to Bluestar again about two months ago.

Bluestar was founded in 2007 by Gabbay and Ralph Gindi, who own, manage and market a portfolio of consumer brands which includes Kensie, Mac + Jac, Joan Vass, Kooba, Yak Pak, English Laundry, Hot Kiss, First Kiss and Harvé Benard. While their success has been mostly in midtier distribution, they have begun eyeing firms higher in price point. Bluestar’s strategy is to build brands and consumer recognition through licensing programs that fit the clients’ profile.

Tahari and Levine have a business relationship that dates back to 2001 when they launched the Tahari ASL business, which includes the Tahari Arthur S. Levine brand of suits and dresses, as well as a private label division.

Bluestar is a closed private equity fund with $250 million of committed capital. Historically a cash buyer, it has had institutional partners and has leveraged several acquisitions. It is actively pursuing acquisitions that fit their investment criteria, said Gindi. He said that the company’s initial objectives will be “to line up a group of best-in-class partners that can work together and deliver a cohesive Catherine Malandrino brand message across multiple categories.

“She [Malandrino] is a fantastic businesswoman and way more than a designer,” added Gindi. “She’s got a passion that’s second to none, and she wants to take the brand where we can help her get to.”

According to Gindi, “Elie and Arthur did an incredible job positioning the brand in the bridge and contemporary markets. They will continue to be instrumental to the growth of the brand. Bluestar will now take this foundation and build a lifestyle brand that can be carried throughout the retail floor and throughout the world.”

“We look forward to building Catherine Malandrino into a global lifestyle brand; creating destination shops-in-shop with new and existing partners and extending the brand into many other categories and international markets,” added Levine.

Tahari added, “We are excited to be partnering with Bluestar, who we believe can assist the Catherine Malandrino brand in reaching its full potential and become the global powerhouse I know it can be.”

Malandrino said she’s eager to launch an advertising campaign that will reinforce her brand image. She would like more women to understand what the brand message is. “I’ve been recognized and am on the map, but not through advertising. Editorial has been really supporting me, and I’d like to give back to magazines,” she said. She also looks forward to opening more retail stores. She revealed she is currently in talks with a retail partner, Joe Heiss, who will focus on retail, wholesale and international expansion, working with Malandrino president Bernard Aidan.

At present, Malandrino has three stores in the U.S., in New York’s Meatpacking District, SoHo and East Hampton. Several years ago, Malandrino had seven retail stores in the U.S., but after the stock market crashed, she was forced to downsize the business. That’s when she sought investors and brought in Tahari and Levine. Malandrino also has an international presence and franchised stores in Dubai, Qatar and Saudi Arabia. Some 30 percent of her business is generated by international accounts, she said.

Born in Grenoble, France, Malandrino began her career in Paris after graduating from Esmod. She worked at Dorothée Bis, Louis Féraud and Emanuel Ungaro, and in the Nineties was a designer at Et Vous before coming to the U.S. and joining Diane von Furstenberg. Fifteen years ago, Malandrino struck out on her own. Known for her sexy dresses, daring colors and slinky jersey gowns, Malandrino’s collection has a feminine and international appeal. Her clothes have been worn by such celebrities as Madonna, Halle Berry, Sarah Jessica Parker, Mary J. Blige, Kristen Stewart, Demi Moore and Alicia Keys.

Malandrino said she’s eager to expand her range through licensed categories, of which she presently has none. “It’s been a virgin brand,” she said. She aims to add footwear, handbags, sunglasses, jewelry, intimates, lingerie and hosiery, as well as home, to the lineup.

Asked what attracted her to Bluestar, Malandrino replied, “I liked their attention and desire for the brand.” She also admired their connections and expertise with licensing opportunities. Malandrino said they are seeking a new showroom and will stage a fashion show in September.

Malandrino has also designed a collection for Kohl’s DesigNation this fall. It will be launched at 1,100 Kohl’s stores as well as on kohls.com in September for three months. “I can bring Paris to an American woman. Everybody wants to be a part of the dream,” said Malandrino, pointing to a black dress printed with a silhouette of the Eiffel Tower in the back. Malandrino’s 80-style limited-edition collection will retail from $36 to $130.