Blumarine to Show in Moscow

This will be the first such event for the Italian fashion company, which is investing in countries that are growing the most. 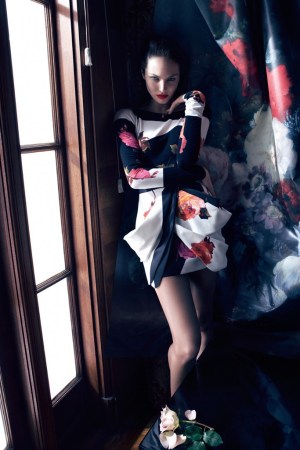 MILAN — Blumarine is planning a fashion show in Moscow in November.

This will be the first such event for the Italian fashion company, which is investing in countries that are growing the most and showing the biggest potential. Russia and Asia account for 40 percent of sales, said Gianguido Tarabini, sole administrator of Blumarine parent company Blufin SpA.

“Russia and the former Soviet Union countries are markets that are showing great results and we are very satisfied,” said Tarabini, attributing the success of Blumarine in the area to a “real made-in-Italy product and meticulous attention to details.” Tarabini also pointed to the Far East as a “very strong market,” and to expansion plans in Japan. At the end of December, Blufin SpA signed an agreement with Woollen Co. Ltd.-Mitsubishi Corporation Fashion Co. Ltd. for the distribution in Japan of Blumarine and younger brand Blugirl starting with the fall season. The agreement succeeds a previous one with Bluebell.

“China is a great market, but we must not delude ourselves thinking it will replace the rest of the world,” remarked Tarabini.

In 2012, the company posted retail sales including licenses of 300 million euros, or $384 million, in line with the previous year. Europe accounted for 50 percent of revenues.

The company has inked a four-year license with Walt and Brown SA for the production and distribution of a men’s sportswear and beachwear line called Blumarine Sport. The collection will be presented to buyers in Milan on July 4 and will hit stores in December. In line with the women’s signature brand, the lineup includes animalier prints juxtaposed with flower motifs. Swimsuits made with the technical “fast dry” fabric with a velvet effect, printed polo shirts, T-shirts, beach towels and printed shirts are among the new pieces.

Separately, Blumarine is looking back to its ad campaigns of the past. For fall, the company will unveil its new ads featuring Candice Swanepoel and photographed by Camilla Akrans. Tarabini’s mother, designer Anna Molinari, said she wanted to return to the “iconic images and atmospheres of the old Blumarine campaigns by Albert Watson and Helmut Newton to create new, intense, extremely feminine and sensual images, while maintaining the heritage of the brand.”

The company is family-owned, and Tarabini said there are no plans to publicly list it or relinquish control.