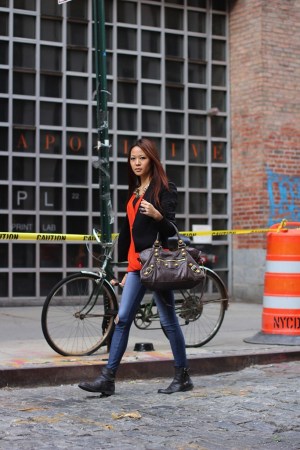 With today’s noontime launch, the members-only Web site Bomoda will take a first-comes-content-then-comes-commerce approach to wooing Chinese travelers and expats.

With an office of eight in New York and a smattering of others in Shanghai, Beijing and London, the start-up expects to have 25,000 members on opening day and 200,000 by the end of the year. With no advertising or special events planned for the launch, the company has relied on 500 friends, family members and key influencers to help build buzz. Bloggers Leaf Greener and Shan Shan have signed up to help spread the word. The site’s content will be available only in Mandarin.

The plan is to introduce Chinese consumers to a greater variety of Western brands beyond the more established luxury ones. With 200 million luxury consumers in mainland China, the company’s founders are eager to capitalize on that buying potential. Once Bomoda has cultivated a solid base of members, an e-commerce component will be added within a year. First off, the site will inform users about what to see, do and buy in the world’s fashion capitals. The emphasis will be on London and New York initially, with Paris, Milan and Tokyo to follow. Members have access to a four-times-a-week newsletter and a Weibo group. There they will find such features as the “top three cool places” where “Gossip Girl” was filmed. Although the show can only be accessed online in China, it is popular and production for the Chinese version, which is tentatively called “China Girl” and set in Shanghai, gets underway in June. (Warner Bros. & Metan Development Group are developing it.)

Two of the company’s four founders — chief executive officer Brian Buchwald and chief operating officer Alain Rothstein provided the initial seed money. Editor Suki Sun and chief technology officer Mark Angelillo are the other founders. The company is close to lining up an additional $1 million through an assortment of investors, Buchwald said. In addition, the capital that is being raised now will be put toward the development of a mobile application.

Sun, whose resume includes runs at Time Out Shanghai, Time Out Beijing, Seventeen magazine China and Elle China, oversees the content and is tapping into her contacts to recruit members and designers for the site. Sun and her husband relocated from China to New York in 2010.

Celebrities, designers and fashion influencers such as Derek Lam, artist Liu Bolin and photographer and MAC Cosmetics collaborator Chen Man have agreed to share some of their favorite finds in various cities for the site’s content. Man, for example, already has 500,000 followers on Weibo. The aim is to offer tips for travelers about local bars, hotels, restaurants, shops and cultural activities that will appeal to Chinese people. When members log in on Wednesday mornings in China, they will see Member Styles featuring on-the-street photos of stylish Chinese women around the globe including some from Parsons The New School and Central Saint Martins students. Some will be photographed and others will be photos provided by the subjects themselves. Some will also provide info about their favorite local picks. “We want members to feel these are women they can identify with and not a six-foot, blonde-haired blue-eyed woman whose choices in clothing and cosmetics would be considerably different,” said Sun.

There will be no fee for members initially. The site will have paid advertising, but Buchwald declined to provide ad rates. Brands and designers, however, are being encouraged to donate signed and customized products (though irregular merchandise will be accepted too) for online raffles. Michael Kors, Jill Stuart and Tom Binns became “brand partners for the launch,” merely by providing merchandise, said Bomoda’s vice president of development Maya Poulton. Stuart’s accessories and apparel, for example, will be featured on the newsletter and on the home page for one week. To qualify for the sweepstakes, a member must refer five friends to Bomoda. Stuart and others who provide merchandise are not paying to be included in any way, Poulton said.

Stuart said, “Bomoda recognizes the exceptional opportunity with Chinese customers and retail tourists, and they have created a unique vehicle in which to reach them.”