Carven Set to Open in SoHo 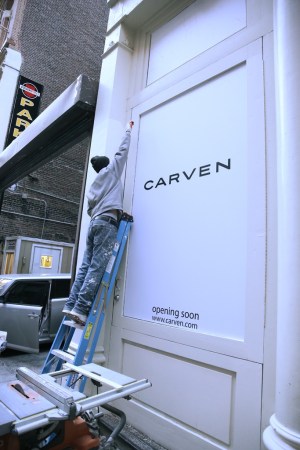 “It’s a fashion dynamic — contemporary but also very creative,” said Henry of the area, where Carven moved into the space formerly occupied by Curve before it relocated to Bond Street. Incidentally, Nevena Borissova, Curve’s owner, carries Carven and asked Henry and the label’s chief executive officer, Henri Sebaoun, if they would be interested in taking over the lease on Mercer. They reworked the 1,636-square-foot space with architect Eric Chevallier, implementing the mosaic flooring, oak, marble and furnishings designed by Domeau & Peres to be consistent with Carven’s 15 other stand-alone boutiques. There are a few decorative touches specific to New York, such as a ceiling light installation, a pêle-mêle mosaic wall and red plywood floor, which “French people consider a very American material,” said Henry.

The New York store, which carries the men’s and women’s collections, is the latest in a spate of retail activity for Carven, which opened boutiques in Shanghai and London in the last month and has plans for 20 more stores in the U.S. in the next five years. Additionally, Carven signed a long-term contract with Club 21 U.K. to increase its retail presence there, with a similar deal with the distribution company Bluebell Group in Asia. Sebaoun is also seeking outside investment to propel the label’s growth, though nothing is definite yet.

Sebaoun and Henry relaunched Carven, the Parisian label founded by Madame Carven in 1945, in 2009 and were met with instant success. Market sources estimate Carven’s revenues at 30 million euros, or $40.2 million at current exchange. Establishing its own stores is a big part of the growth strategy. “If you work only with a department store, and the buyer only buys a few pieces in the collection, it’s difficult to explain the philosophy,” said Sedaoun. “When you have your own boutique, you can really present ideas in a visual way.”

In typical retail renovation fashion, Carven’s SoHo vision was still a work in progress as of Tuesday, when Henry and Sebaoun arrived from Paris. While the store’s Parisian attitude was being installed, they took to a well-established French restaurant, La Luncheonette, for a dinner to pre-celebrate the opening. Editors and party people, such as Atlanta de Cadenet, Leandra Medine, Harley Viera Newton, Tennessee Thomas and Ciara, who arrived wearing a big blue coat from Carven’s fall collection, were serenaded by an accordion player. “It actually works out because it’s so darn cold. I feel very insulated,” said Ciara of her weather-appropriate outerwear.

Those attending tonight’s store opening, which has been recast as a “construction party,” pending the delay, might want to grab a hard hat.