Bonpoint introduced its new artistic director in Paris on Thursday, along with her first design effort, a fall 2021 collection full of quiet luxury, sophisticated colors and charm.

“I approached it very intuitively,” said Esther Loonen, a Dutch-born creative who has designed for brands including Isabel Marant and Soeur, in addition to her own children’s wear label. “Bonpoint has always been more than just garments. It’s a maison, and it has a proper culture. It represents a Proustian madeleine for all of us.”

Showing off a shearling aviator for boys the color of bitter chocolate, she mentioned that an adult colleague gasped when he saw it, remembering being obsessed with a similar Bonpoint coat as a child — and pining for one still.

Founded in 1975, Bonpoint is billed as the only French couture house dedicated to children’s wear, famous for it Liberty-print Duchesse dresses with smocking details, and for its luxe baby clothes.

While loyal to Bonpoint’s reputation for fancy clothes realized with exceptional savoir faire, Loonen also added some rugged, sporty and urbane designs, including rubber boots in collaboration with Hunter, down puffer vests, flared jeans and plaid trucker jackets for boys and girls.

There are also plenty of designs to make kids feel more grown-up, from classic trenchcoats with removable hoods to tailored jackets in velvet.

Interspersed are quirkier touches, including boys’ looks inspired by filmmaker Wes Anderson’s retro-tinged style to a quilted jacket in metallic lambskin. A girl’s white mohair coat with a fluffy collar was flecked with colorful, hand-embroidered sequins, bringing to mind a funfetti cake.

“Bonpoint has always offered a wardrobe,” Loonen said, leading a visitor through the collection, displayed at its flagship on Rue de Tournon in Paris.

The designer leaned into the brand’s heritage, including its signature “milk white” shade in sets for newborns, adding sweet embroideries to prim collars and resurrecting an archival script logo. 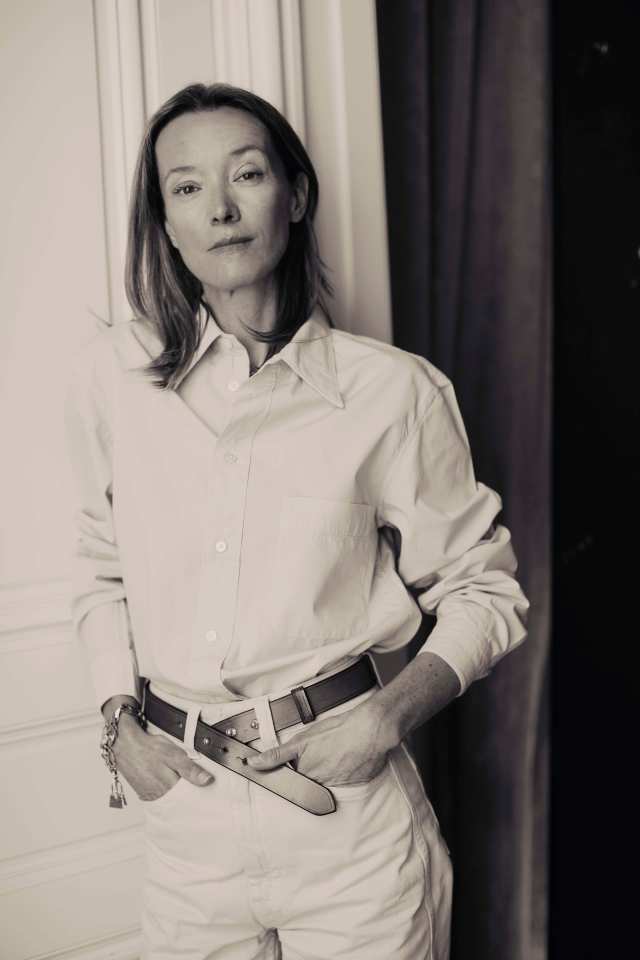 A graduate of Dutch art school ArtEZ University of Arts, Loonen has had a varied career in fashion. In 2007, she launched a luxury children’s wear brand called Lili & the Funky Boys that was sold at stores including Le Bon Marché in Paris. She also operated a namesake design studio in Paris before quietly joining Bonpoint full-time in September. She noted she is also a mother of three children, ages seven to 15.

Bonpoint chief executive officer Pierre-André Cauche, who joined from IKKS Group about a year ago, has been quietly refocusing the business on its core categories. He discontinued its adult line, and recruited Loonen to succeed Anne Valérie Hash, giving her the creative reins of an image campaign emphasizing “fun, elegance and tradition.”

In an interview, Cauche said the business fared well despite the health crisis, with business surging in China, where Bonpoint operates about 24 stores, including three dedicated to perfumes and skin care, a burgeoning part of the business buoyed by the clean beauty movement.

The company plans to open boutiques in Shenzen’s Mixc Mall, Shanghai IFC and Beijing China World this year, while not neglecting its home market of France, where a location in Deauville is slated to open next month.

Bonpoint counts 130 boutiques in the world, and wholesales to about 100 multibrand stores, Cauche said.

The executive is also focused on upgrading Bonpoint’s digital experiences, including a newborn boutique in development that aims to mimic the in-store experience.

Bonpoint has been owned by private investment firm EPI since 2006 and has ramped up its presence in Europe and Asia. EPI’s other properties include J.M. Weston, French bootmaker F. Pinet, the Champagne houses Piper-Heidsieck and Charles Heidsieck, and the wine makers Biondi-Santi, Château La Verrerie and Tardieu-Laurent.