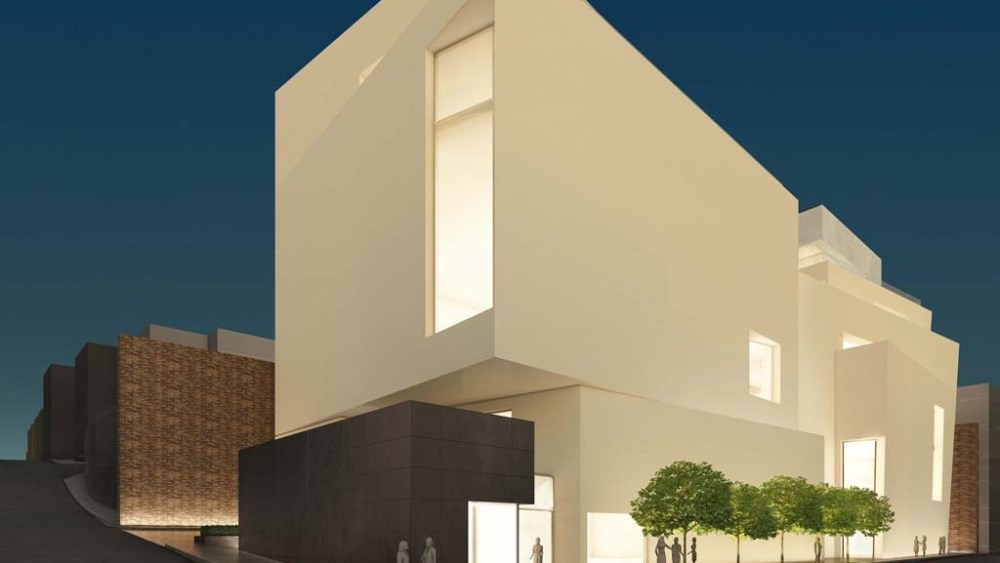 Boontheshop, which sells brands such as Alexander McQueen, Givenchy, Mary Katrantzou and Victoria Beckham, has a new 27,000-square-foot flagship in Seoul, designed by Peter Marino.

The store consists of two angular, white marble buildings, one with 16,000 square feet of space and the other with 11,000 square feet, connected by glass bridges and situated on one of the country’s tallest mountains. Crinkled silver, which covers the valet parking area, looks like gold when it reflects the sun, Marino said. “It’s as shocking, when compared to traditional Korean buildings, as the Guggenheim Museum was when it opened in 1959 on Fifth Avenue,” the architect added, referring to the spiral structure designed by Frank Lloyd Wright. The Boontheshop buildings’ square footage excludes the restaurants and executive offices Marino built above the store.

“The store has wonderful volumes, all different ceiling heights,” Marino said, noting that building A is comprised of two levels and building B has three.

Marino is known for designing the global flagships of luxury brands such as Chanel, Céline, Dior and Ermenegildo Zegna in the U.S., Europe and Asia. Marino’s business in China “kept me from going bankrupt during the recession,” he said. But the Chinese, who hold the title of the biggest luxury shoppers in the world, have reined in their spending. For the first time, the growth of the luxury market fell into negative territory to minus 1 percent, according to Bain & Co.’s 2014 annual global luxury study.

“All the brands are coming here,” Marino said of Korea. “I have a commission to build a new Chanel [flagship] in South Korea.” The average household net-adjusted disposable income in Korea is $18,035 a year, according to the Organization for Economic Cooperation and Development’s Better Life Index, and the richest 20 percent of the population earns almost six times as much as the bottom 20 percent. Seoul, South Korea’s capital, has a population of more than 20 million people.

It’s the top 20 percent that Boontheshop is targeting with a long list of designers. Launched in 2000, Boontheshop and Boontheshop men’s stores are located in Cheongdam in Seoul’s luxury district. Boontheshop, which calls itself “a niche for fashionistas who allow no compromise of standards for any vulgar demands of the passing fad,” is owned by Korean department store company Shinsegae, which features Boontheshop in-store boutiques at three locations.

The stores are Shinsegae Centum City in Busan, which was named the world’s largest department store by the Guinness Book of World Records in 2009; Shinsegae Main Jung-gu in central Seoul, Korea’s first department store when it opened in 1930, and Shinsegae Gangnam in an affluent Seoul neighborhood. Shinsegae department stores carry brands such as Burberry, Lanvin, Tiffany & Co. and Van Cleef & Arpels.

Shinsegae’s businesses are not all upscale, however. In 1993, the company opened Korea’s first discount store, E-Mart, and in 2006 bought Wal-Mart’s ailing Korean business.

“It is unlike any other place in the world,” Marino said of Korea. “It’s exhilarating. My work is still mostly coming from Asia — Hong Kong and Singapore — but it’s also coming from places like Myanmar.”

Shinsegae will “watch Boontheshop, and if it works, they’ll consider other locations,” said Marino, whose last design for a multibrand retailer was the Barneys New York Madison Avenue flagship in the early Nineties.