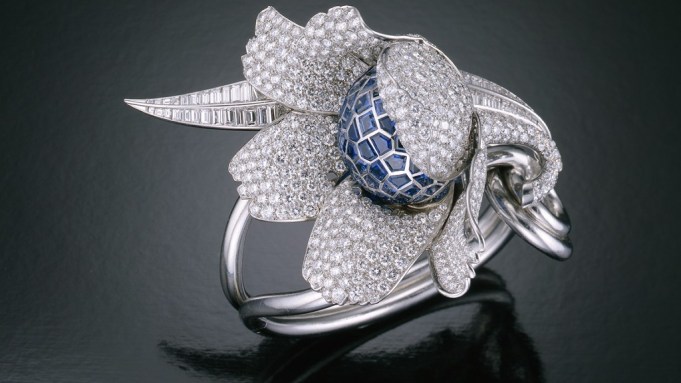 The show, through March 8, features pieces from Lane’s personal holdings, including gems owned by Hollywood icons Ginger Rogers, Mae West, Myrna Loy, Gloria Swanson and others. Lane has been collecting since the Seventies and specializes in the period from 1850 to 1930.

This show is not the first time the MFA has celebrated Lane’s eye. A 2008 show of Art Nouveau jewelry featured numerous important pieces he sold as a young (and struggling) artist to his first patrons, Philadelphia collectors Joe and Ruth Sataloff.

“Dr. Joe [Sataloff] discovered me selling bits and pieces at the 26th Street flea market….I had been going back and forth to Paris, scouring antique shops, and didn’t really have much money to spend, but what I did buy was very selective,” Lane said. “When Joe looked in my small showcase, he said, ‘Who is this guy? He has something.’  ”

For 30 years, the Sataloffs bought Lane’s Art Nouveau finds, and, at his patron’s encouraging, Lane began his own collection with what didn’t interest Joe Sataloff: diamonds.  Lane studied craftsmanship, learning how much a setting  can affect a gem’s expression — an art he capitalized on when he began designing his own jewelry.

When Lane moved to Los Angeles in the mid-Eighties, “some of the great movie stars were still living,” he recalled. “I began to meet some of their heirs, or bought directly from them.” He looked for pieces that displayed technological advancements of the moderne style and could boast a celebrity provenance.

He rediscovered early-20th-century avant-garde designers such as Paul Flato, whose late-1930s “wrist corsage” floral bracelet in platinum, diamond and pavé sapphire is one of the show’s stunners.

The show also includes Lane’s finds from Trabert & Hoeffer-Mauboussin, a New York-based firm that was among the first to specifically court Hollywood wealth. THM specialized in gem-encrusted suites with ingenious mechanical constructions that allowed the pieces to be disassembled or hinged together to make new shapes.

“Multiuse” was practical, said Emily Stoehrer, the MFA’s jewelry curator. In that era, starlets owned their jewels rather than wearing loaners — those gems appeared in their films and in publicity photos. Ginger Rogers took her four-piece gold, diamond and jade Paul Flato suite, which Lane loaned to her show, and restyled it on dozens of occasions.

“Hollywood Glamour” celebrates not just gems but fashion, too. Specifically, the show investigates the era in which costume design began to be recognized as its own discipline. The show includes work from Adrian, Edith Head, Travis Banton (Head’s predecessor and chief designer of Paramount Pictures) and René Hubert. Chanel costumed three films between 1930 and 1932, at the request of studio chief Sam Goldwyn, who paid her handsomely, said fashion curator Michelle Finemore. Hamish Bowles loaned the show a few Chanel pieces.

“When we examined these costumes, we marveled at the craftsmanship,” said Finemore, who discovered that the gold lamé Head used on a 1937 Betty Grable dress features thread first plated in silver and then gold. In the film “This Modern Age,” Joan Crawford flutters around in an Adrian chiffon gown whose ruffles are given bounce by a thin underlining of horsehair. When silent films gave way to talkies, costume designers learned to shun taffeta and other rustling fabrics, which microphones picked up on; to coat gems with cold cream, so they wouldn’t create halos of light; and to choose fabrics like lamé, which would glimmer enticingly on black-and-white film.