Bottega Veneta’s chief executive officer Marco Bizzarri talks to WWD in his first interview since being appointed in January. 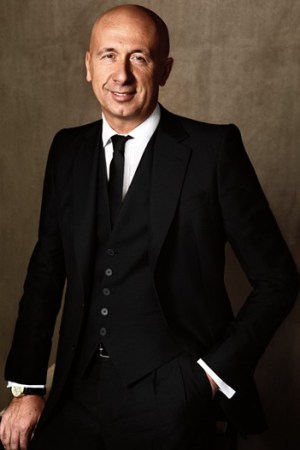 MILAN — Despite dramatic changes in the economy, trading down was not an option for Bottega Veneta’s new chief executive officer, Marco Bizzarri, in his efforts to keep building the luxury goods brand.

“No compromises — this is a winning strategy,” Bizzarri told WWD in his first interview since being appointed in January. “Customers are more aware of quality and are looking for long-lasting purchases — also because of their changed shopping habits.”

And his understated, informal style — getting acclimated to the brand before discussing strategies publicly — fits well with the company he heads.

“There has to be a transitional period of 10 to 12 months before you can see any result,” said Bizzarri, wearing a charcoal tailored suit with peaked shoulders.

The headquarters space, with interiors by the brand’s creative director, Tomas Maier, houses showrooms, offices, a cafeteria and a theater for the brand’s runway shows. It is a tangible sign of Bottega Veneta’s growth into one of the more profitable brands under the Gucci Group umbrella, but Bizzarri’s arrival coincided with the global recession. He conceded that the last quarter of 2008 was “very heavy” for Bottega Veneta, which reported a 2.3 percent drop in sales to 102.2 million euros, or $150.2 million, compared with the same period in 2007. Revenues for full year in 2008, however, were up 9.8 percent to 402 million euros, or $591 million, compared with 2007, accounting for 11.9 percent of Gucci Group sales. Recurring operating income in 2008 totaled 100.7 million euros, or $148 million, up 9.2 percent compared with the previous year.

Dollar figures were converted from euros at the average exchange rates for the periods to which they refer.

“This was a successful, well-managed company when I joined it, but the crisis put everything in discussion,” said Bizzarri, the ceo of Stella McCartney before replacing Patrizio di Marco, who was named as ceo of Gucci when Mark Lee stepped down at the end of 2008. The McCartney label is also owned by Gucci Group.

Bottega Veneta fits in with the customer’s quest for value, Bizzarri said.

“The average price per purchase has not dropped, which proves this point,” he observed, adding the brand’s more “timeless” pieces, such as the Cabat or Knot bags continue to be best-selling items. Retail prices range from $1,550 for the medium-sized iconic Veneta bag in intrecciato nappa leather to $3,080 for the Roma and $78,000 for the large Cabat in Cocco Lavè.

“We decided we would not compromise on pricing, which reflects the costs of workmanship and materials,” Bizzarri said, noting continuous pieces are never discounted. A secondary line is not on the agenda.

With Maier, Bizzarri initiated a new supply process that has maintained the company’s workforce despite the different seasonal peaks in production — all without asking for government financial support.

“Tomas illustrates the materials and themes of the collections and we launch our production before the sales campaign even begins, collaborating with our laboratories,” explained Bizzarri, noting 80 percent of revenues derive from Bottega Veneta’s own stores.

Despite the risks connected to stocking merchandise, production is linked to the orders. “The process is more centralized and more coordinated, and all functions are connected, from visual displays to advertisement and nothing is left to the last minute,” Bizzarri said.

The executive praised Maier for his “unique and clear vision” and his “creativity but also his quick understanding of the business.” The designer “knows what is happening in the market,” said Bizzarri, describing the relationship with Maier as “a dream.”

The designer was equally positive about his rapport with Bizzarri. “I am enjoying working with Marco as I find him to be quite enthusiastic, dynamic, and a strong manager with terrific people skills,” Maier said. “He respects the DNA of the brand and understands the vision.”

In a cost-cutting move, Bizzarri decided stocks should be managed centrally rather than regionally.

This move has accelerated deliveries, reduced circulating capital and inventory levels overall and created cash to invest, for example, in the opening of stores. In 2009, Bottega launched five stores in Korea, two in Hong Kong, and flagships in Beijing, Macao and Shanghai. The company has a total of 131 directly operated stores and 26 franchisees. The brand is also available at 350 points of sale globally.

Bizzarri said he was “very happy” with the performance of the brand in the U.S., where it posted double-digit growth in September and where it plans to open a new store in Las Vegas in early 2010.

“We’ve more than recovered the losses from the beginning of the year,” said Bizzarri, who attributed these gains to the “purity” of the brand and the company’s focus on retail experience and service. The U.S. accounted for almost 16 percent of sales in 2008. The company is increasing its workforce in the U.S. as it invests in its e-commerce component. Bottega’s e-commerce site launched in 2005, but the company is gearing up to unveil a second generation site in the first part 2010.

A new e-business dedicated team implemented some technical changes and adjustments on the existing site in July. The changes, which allowed faster features, a wider-yet-more-focused product range on display and improved images, led to triple-digit growth over the three following months, showing the potential of the web as a retail channel, Bizzarri said. No figures were disclosed.

The brand is sold in 32 countries, but Bizzarri said it is still unavailable in South America. “There still are areas with a lot of potential that we can develop,” he said. “Our focus now is on China and Asia, as these are the areas that are growing more quickly and the Asia-Pacific region has overtaken Japan in the third quarter of 2009.”

The company also increased marketing in the second half of the year, opening up to advertising in newspapers for the first time to cast a wider net and expand brand awareness.

“Our effort is to communicate the artisanal quality of our goods,” Bizzarri said.

In order to secure trained and skilled craftspeople, Bottega Veneta in 2006 set up a three-year educational program for aspiring luxury handbag makers in Vicenza, Italy, where the company was founded and is based. Most of its students have been hired by the company, Bizzarri said. The school’s next session will being in 2011.

Coming up next, Maier is set on adding a licensed Bottega Veneta fragrance, although there is nothing definite yet, Bizzarri said.

“This will be the brand’s first fragrance ever,” he said. “For this reason, we are carefully evaluating the project.”