Arriving relatively late into the China market, the Italian luxury brand is certainly making up for lost time. 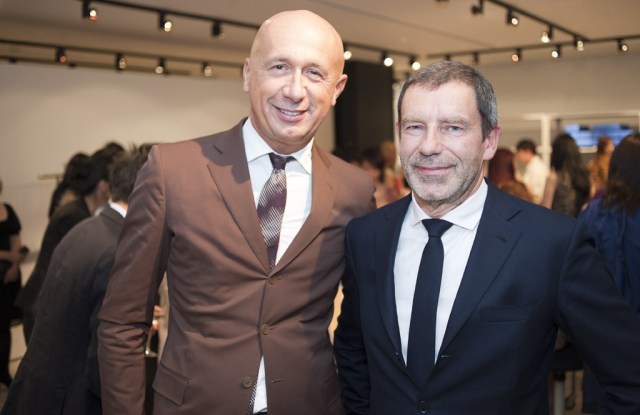 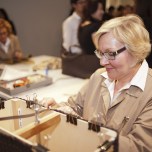 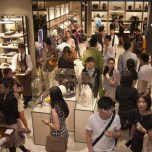 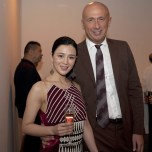 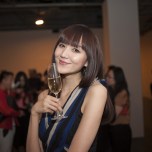 While the brand only opened its first store in China in 2007, Thursday’s grand opening of the 22nd store in China — the fourth in Shanghai — brought together customers, industry executives and fashionistas to celebrate the brand’s increasing popularity in China. The new store at the Yi Feng Galleria mall, near Shanghai’s most exclusive address on the Bund waterfront, will be the brand’s largest in China. It will also be Bottega Veneta’s first store to double as gallery space, where works by promising Chinese photographers will be on display starting in August.

The opening highlighted how the brand sets itself apart from other Western labels hoping to making inroads in one of the fastest-growing economies in the world. With no red carpet, few VIP appearances, and not so much as a brand spokesmodel, the event was as understated as Bottega itself. The biggest names in attendance were chief executive officer Marco Bizzarri and creative director Tomas Maier. In a country where flashy bling still holds cachet, that kind of quiet confidence is unusual, but it seems it has definitely found its place here.

Guests mingled amid displays of bags and clothing, Bottega bags on their shoulders and glasses of Champagne in hand as they gathered around female artisans from the brand’s Vicenza, Italy, workshop demonstrating the signature weaving technique that has made Bottega Veneta recognizable throughout the world. The opening showcased the next phase of the brand’s “Initials” project, which will offer personalization services for customers. Harking back to the brand’s motto of “When your own initials are enough,” the artisans, wearing tan lab coats, hand-stitched crocodile skin initials onto purchased bags. Thirty bags sold at the opening, with one shopper snapping up five.

Guests at the event inevitably used the same word to describe the appeal of Bottega Veneta products: “low-key.” Chinese actress Zhou Xian Xin said she specifically buys Bottega Veneta bags because they don’t carry a logo, pointing out that the past two to three years have seen a developing trend of low-key luxury here. Shanghai resident Judy Ren, age 30, clutched a BV wallet and a small BV handbag in one hand. “This brand is quite understated but they really value the details and it’s high-quality, so you feel it is really worth owning,” she said.

In fact, that toned-down quality has been earning Bottega a growing legion of followers in China. This segment of luxury customers are becoming more interested in fashion that’s not flashy. Bizzarri said the brand’s understanding of their Chinese consumers has evolved over the years. “At the very beginning, we needed to make sure that the Bottega Veneta values were matching Chinese consumer behavior,” he said. “That’s why we were a little cautious at the beginning. Afterward, we realized that the Chinese consumer is very sophisticated. Of course there are a lot of people that are still buying and showing off logos, there’s nothing against it, but the point is that we are approaching a consumer that is different.”

Unlike other luxury brands, they make no attempts at localization or specialization for the China market. Maier said this was a conscious decision. “This is an Italian product that is conceived to go out into the world, that has a very cosmopolitan outlook to it, but it’s very Italian. I think that is very important because it is special and it has a provenance to itself. It has a reason to be there,” the creative director said.

Maier believes Chinese consumers, like its customers around the world, are not interested in being pandered to. “Bottega is a global product and the client in every local market wants exactly that product. I’m against a product that is localized and specifically created for a market. I find that personally hideous. Hideous. And I think that is not what the client would want. The customer we have has that certain type of sophistication and likes a product that is not really localized and has a certain kind of understatement to it,” he said.

The fast growth in the China market has meant that Bottega Veneta can try new things here. Armed with the knowledge that men are some of their biggest customers in China, the company opened its first men’s-only shop last year in a Shenyang, Liaoning province, mall. Following the success of the store, it opened a similar unit in New York City this spring. The fall also saw the launch of a Chinese-language Web site to introduce the brand to Chinese consumers.

Bottega Veneta is doing well all over the world, with first-quarter sales up 39 percent, but Bizzarri said he feels particularly confident about the China and Asian market. “If you look at our business, over 55 percent of our business is in Asia, 45 percent is the U.S. and Europe. That is completely the reverse of the industry,” he said.

For now, the strength of the Asian market depends on the brand’s huge popularity in Japan. China is still catching up, he said, but he has high hopes. “China is a superimportant market and it is growing very fast. The fact that the Chinese customers are approaching our brand quicker than any other emerging country is due to the speed of the maturity of the market,” said Bizzarri.

Even so, he said Bottega Veneta is not banking on the growth of the China market. “We don’t want to put all our eggs in a single basket. We are actually investing a lot in Europe and the U.S.,” he said. “We strongly believe that Europe will continue to be the flagship for luxury and if the Chinese consumer buys in China it is also because in traveling, he looks at our brand in the proper way. If tomorrow for any reason China slows down, we need to be strong in other regions. We need to have a balance in terms of geographical location of investment.”