By Marcy Medina
with contributions from Kari Hamanaka
on May 9, 2016
View Slideshow 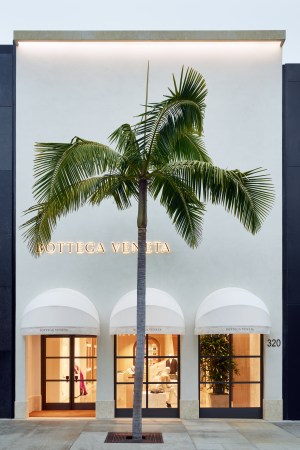 LOS ANGELES — Like most creative directors, Tomas Maier likes to set the stage for people to experience his brand. That was evident Friday, the first official day of business at Bottega Veneta’s Rodeo Drive “Maison,” the Kering-owned company’s second local architecture-specific, Maier-designed retail location in the world and the first in the U.S.

Seated on a dusty rose velvet sofa beneath a skylight shaded with white wooden slats, Maier looked at his spring 2016 ready-to-wear collection, its colors set off against the bleached oak walls, and sighed contentedly. “This is a wonderful spot. Now we have two destinations in town, with two different characters, and it shows our interest in California and the American market. It’s very important; our local clients have been here so long because Beverly Hills was the second store to open in the U.S., in the Seventies.”

That boutique’s original location at 457 North Rodeo Drive is now literally history. Maier’s new, 4,828-square-foot space at 320 North Rodeo, between Valentino and Dolce & Gabbana, represents the culmination thus far of his 15 years at the creative helm of Bottega Veneta, during which he’s steadily grown and refined the brand while adapting to the luxury market’s demand for ever more experiential and unique retail spaces. Case in point: The concept store he opened here in 2013 on Melrose Place to give customers a counterpoint to the full-on Rodeo Drive shopping experience now afforded by the Maison.

The Maison concept debuted in 2013 at Via Sant’Andrea 15 in Milan, showcasing the company’s full product range in an 18th-century building that represents the most refined and restrained Milanese architecture on the exterior, and balances of lightness, spaciousness and intimacy inside. The Beverly Hills location is similar in that regard; Maier completely designed the former Pomellato space to embrace Southern California’s Mediterranean Revival and Mexican Colonial Spanish Revival styles and harnessed its famed light within the neutral, earth-toned interior.

Maier, the son of an architect and himself a connoisseur, cited Bertram Grosvenor Goodhue’s Austin Val Verde estate in Montecito and Lutah Maria Rigg’s Romberg House in Pasadena as his primary inspirations. “I’ve been coming to California since my first trip in ’78. I shouldn’t be talking about that anymore, right? It doesn’t make me much younger, but I’ve always had a strong connection with the place.”

His design ethos is reflected with the California-specific architectural details, from the minimal white arches of the facade to the elegant, casual grand staircase leading to the second floor. Even the mannequins are formed to resemble marble statues — one bust set on a pedestal looks like it came from the antiquities hall of the Getty Villa, except it’s sporting a colorful gemstone necklace. Yet they’re made from bleached wood.

“I love the design of the store; it’s a beautiful store but it doesn’t distract you from the clothes, which I think are the most important part,” said Andie MacDowell. “I think [in] some places, the architecture feels so noisy that you have a hard time enjoying the clothes and I thought there was something very soothing about the design. Even the roundness of the railings going up the staircase, I just thought there was a softness and gentleness to it that allowed the clothes to be the show rather than the architect.”

Exclusive to the store are several new crocodile and deerskin colors of the house’s new Beverly 71/16 bag. Bottega’s new Parco Palladiano fragrance also is available exclusively here for the first two weeks of May before its worldwide retail rollout.

The next Maison will open in New York next year on Madison Avenue at 64th Street. Maier said, “That is it for the United States, but definitely Tokyo is a big town on the map for me, then certainly there will be a Maison in China, and maybe two more in Europe. It’s all about the real estate that is becoming available. It’s not that easy because you want to be in the right place with the right amount of square footage. It also needs to have some character, or the possibility to give it character, as well.”

Like the Beverly Hills Maison, the New York store pays homage to Bottega’s original location there. Maier scored on the character front — three landmark townhouses that he’s combining into one. He also has a personal connection to the neighborhood, maintaining a residence nearby. “I’m kind of a part-time New Yorker,” he said, but then, between his frequent visits to Los Angeles (he’ll be back October 8 to cohost the Hammer Museum’s annual Gala in the Garden) and Tokyo, he’s more of a world citizen. His next stop this week is China, where he’ll attend the opening of an “Art of Collaboration” exhibit of fine art photographers and visual artists’ work for Bottega campaigns at Ullens Center for Contemporary Art, in Beijing.

“I spend a lot of time [in Tokyo] because I really love Japan,” he said. “It would be very important for us to open a Maison there because it’s a very important market historically and I don’t have a store yet where I could ever make the declaration that I’d like to make toward the city, the people. It would be nice to do something from scratch like build a building, or if that is not the case, then redesign the building and do the entire facade like what we did here. I have an idea, we just have to see if it can work.”

Maier is more hands-on with design than some creative directors, but he enjoys the parallel disciplines. “There’s so much to reflect on and get inspired from; it’s a pleasure. I’m just moving from one area to the next, so I can create an overall view, from the advertising to how the product is presented in a sales showroom. It’s not just making clothes for a runway show.”

Even his airport stores, a place where he clearly spends a lot of time, require his utmost attention. “I always put a lot of effort because it’s like a calling card. You know how many people transit through every day? How can you have an ugly store in an airport? It’s just impossible. It has to be the most beautiful store because it’s such an advertisement. So when people take that not so seriously, I think it’s kind of the wrong move.”