Luxury Middle Eastern fashion retailer, Boutique 1 is opening in London. The relaunch of its e-tail platform, Boutique1.com is set to follow later this year. 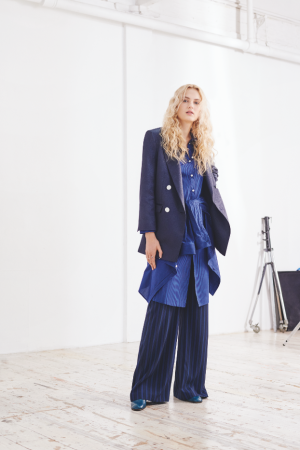 LONDON — Boutique 1, the Middle Eastern luxury fashion retailer, is spreading its wings beyond the Gulf region with a store set to open this month on Sloane Street in Chelsea. The relaunch of its e-tail platform, Boutique1.com, is set to follow later this year.

Located at 127-128 Sloane Street, the boutique spans 12,000 square feet over two floors and stocks ready-to-wear and accessories, denim, swim and activewear, gifts and books. It also houses a VIP personal shopping lounge with a styling team and complementary tailoring service.

The understated interiors are neutral and the materials are natural. There are oak and unpolished travertine marble floors and sandblasted limestone walls. Matte black and brushed brass appears on doors, staircases and display units. Chairs and oversize benches are upholstered in linen fabric.

There is also a café run by Pablo Flack and David Waddington, the duo behind the East London restaurant Bistrotheque. The café, called April’s, has an outdoor terrace. The store is a key addition to the redeveloped part of the street that’s owned and run by Cadogan Estates.

The unit sits near the new Delpozo and Red Valentino stores, while a Hôtel Costes and a Belmond Cadogan Hotel, which will have a restaurant by Raymond Blanc, are slated to open over the next year.

Boutique 1’s cofounder and co-chief executive officer Ziad Matta said it made sense to open a London outpost. “Many of our customers have second homes here, so I think there’s a lot of synergy between the two places,” said Matta, who also operates the Paul & Joe store on Bruton Street and the Missoni unit, across the street from Boutique 1.

While the United Arab Emirates remains Boutique 1’s largest market, the second biggest is the U.K., with customers buying online. There are Boutique 1 stores in Dubai, Abu Dhabi and Beirut.

Matta believes Boutique 1 will offer an attractive alternative to Harvey Nichols and Harrods, which are both a short walk away. “We are an anti-department store at the other end of the spectrum. We are a boutique. We just happen to be a large one.”

He said Boutique 1 is all about personalized service and a distinct point of view. “We’re not trying to reinvent the wheel, but do what we do really well — and be as customer-centric as we possibly can.”

Omni-channel shopping is of paramount importance, said Matta. There is a click-and-collect service with same-day delivery, although customers will have to wait 48 hours if their order is coming from Dubai. Customers will be able to access stock held worldwide, including merchandise from the group’s monobrand stores. Orders can be made online and will be delivered to the new London boutique to try on, with no obligation to purchase.

Boutique 1 also plans to operate a global loyalty program, enabling customers to earn and redeem rewards across Boutique 1 stores and online. “Our strategy is very much to invest both in bricks and mortar as well as online. The same customers shop both,” said Matta, adding the company wants to “push integration to a level I don’t think has been achieved so far.”

He said the challenge on the digital front is to replicate the customer service offered in the boutiques.

Boutique1.com will feature new functionalities, including video chat with sales assistants, although much of the investment in technology has been focused on the back end of the business. “We’ve only invested in technology that will make a difference to customer experience,” said Matta. “There’s lots that the end user won’t even notice — but they will reap the benefits.”

The new platform will also create its own editorial content, encouraging users to “hang out” online in the same way as they might do in the London café. Going forward, Matta is planning to open three mono-brand stores next year in Dubai: Azzedine Alaïa’s only standalone store outside Paris; Missoni, and Isabel Marant.