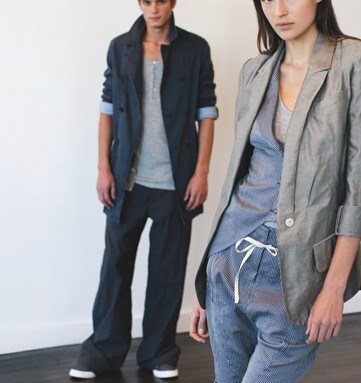 Richard Chai is finally playing the contemporary game for women. And to hear the designer tell it, the move wasn’t so much a knee-jerk response to the economic downturn — though the timing certainly doesn’t hurt — as the result of other factors. The seed was planted early last year, when the New York-based Chai began working on a limited edition collection for Target. Then, for fall 2008, he launched a men’s lineup, priced in the contemporary range, for one simple reason: His older brother, Eddy Chai, is co-owner of the downtown men’s contemporary boutique Odin. The success of the men’s launch — “In Japan, we went from four doors to 30 in one season,” says Richard — prompted him to test the waters in women’s. So for spring 2009, he placed a few lower-priced Richard Chai dresses and tops on the sales floor of the women’s shop, Pas de Deux, also owned by Eddy. “They sold out,” he says. “It was great to get that feedback. I decided this was the time to do it.”

Fast-forward to spring 2010: Chai is moving full-steam ahead with a complete contemporary collection — nearly 40 looks in all. But there’s one thing he’d like to make clear: It’s not “a baby version or dumbed-down version of my main line,” he says. Rather, he identifies the lineup as the female counterpoint to his men’s wear — hence the name Richard Chai – Love. “It’s inspired by my girl, who’s in love with the guy that I dress,” he says of the upbeat moniker. “They’re not carbon copies of each other, but they go hand in hand.”

All of which means there’s a tomboyish vibe and subtle men’s wear references throughout the collection, which wholesales from $50 to $425. The first garment Chai began designing was actually a men’s waistcoast, cut high in the back, so the tails hang languidly in the front. T-shirts are oversized and slouchy with sweeping necklines, as if, Chai puts it, “the girl recut her boyfriend’s T-shirt.” Another vest is reworked from a boyfriend blazer. “I added an acetate back here,” Chai continues, “which is very classic in men’s wear, so it doesn’t feel so serious.” Meanwhile, more romantic, dressier pieces, such as a matching top and skirt with handkerchief hems, are cut from men’s shirting. Yet another borrowed-from-the-boys case in point: the washed, rumpled, at-ease feel throughout. “This is my woman off-duty, more casual and undone,” says Chai.

On Sept. 12, as guests slide into their seats at the Cedar Lake ballet studio for Chai’s runway show, they’ll actually be seeing the debut of this lower-priced label — and not the Richard Chai line they expect; it will be left to showroom-only appointments for press and buyers. Even so, Chai adds that he’s not taking the spotlight off his signature collection. “This forces me to elevate the main line,” he says. “Creatively, this gives me more of a window to do certain items at a higher price point. [The main collection] will still have its own slightly niche world. Love is the accessible extension of that.”