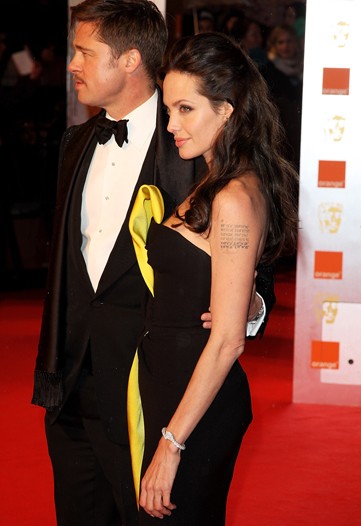 LONDON — There’s a new designer duo in the jewelry world: none other than Brangelina.

Brad Pitt and Angelina Jolie are breaking into high-end jewelry design with Asprey via a capsule collection of gold jewelry and silver accessories called The Protector — and inspired by the snake.

The limited edition collection, which was conceived and designed by Pitt and Jolie, has been in the works for more than a year, and will go on sale at Asprey stores in London, New York, Beverly Hills, Tokyo and Dubai later this week, according to Asprey officials.

Prices start at $525 for a silver baby spoon with a curving, serpent-shaped handle, and all net proceeds from sales will go to Education Partnership for Children of Conflict, which was cofounded by Jolie in 2006. The charity raises awareness and funds to educate child victims of war, conflict and natural disasters.

Jolie and Pitt declined to talk about their collection for Asprey, opting instead to discuss the aims of the charity in an e-mailed quote attributed to Jolie: “These are the children who most need a safe place to learn, a place to heal, a place to learn reconciliation, a place to build a better future and a place — to just be children. Yet the education for these children is often forgotten. Tens of millions of children and adolescents in conflict are not in school.”

An Asprey spokeswoman declined to comment on the collection beyond confirming the facts, and would not say whether celebrity collaborations would be a future strategy for the brand.

The jewelry-loving Jolie has worn Asprey — and other names including Lorraine Schwartz and Mikimoto — on the red carpet. Pitt, who has a passion for architecture and design, in the past has created pieces for the Italian jeweler Damiani. Both Jolie and Pitt have also commissioned pieces privately from Asprey.

So why the serpent theme? When she was pregnant with their daughter Shiloh, Jolie was given a ring — not from Asprey — in the shape of a snake. Since then she’s considered the reptile a talisman and protector of her family.

The collection features silver baby gifts such as the spoon, an eggcup, tooth box and picture frame. For older children and adults, there are pendants and rings made from gold and micropavé diamonds, all featuring curving snakes.

Prices for the top-end pieces have yet to be confirmed and include diamond, black diamond and emerald pavé rings; bracelets; earrings, men’s cuff links, and dress studs. Jolie wore one of the serpent bracelets from the collection to the BAFTA Awards in London in February.

The collaboration is a major boost for Asprey, which is rebuilding its business and polishing its image under new chairman John Rigas, whose Sciens Capital Management purchased the brand with Plainfield Asset Management in 2006.

Together with chief executive officer Robert Procop, Rigas has narrowed Asprey’s product offering and put a fresh focus on bridal and high-end jewelry. The two have also rehired many of the silver, jewelry and leather craftsmen who had worked for Asprey in the past, and put a new emphasis on the bespoke rooms in the store. Today, clients can commission work and have a say in the design of bespoke objects.

Asprey has also tapped Bruce Hoeksema, the former president of Valentino USA and founder and designer of the VBH accessories label, to design a line of luxury handbags for the brand.

“Our aim has been to narrow and refocus the brand, which had gone down-market in terms of quality,” Rigas told WWD last month. “We want to improve it and give it back to its [traditional] clientele.”

According to Rigas, jewelry makes up more than 50 percent of Asprey’s sales, followed by leather and silver, which generate about 15 percent, and watches, which account for 12 percent. The rest comes from products such as silks, china and vintage books.

Asprey has sales of about $35 million annually, according to Rigas, who hopes to increase sales by 50 percent “within the next two years,” and double them in three to five years.