Prada chief Patrizio Bertelli spoke on the future of Milan Fashion Week at the Chamber of Fashion’s headquarters. 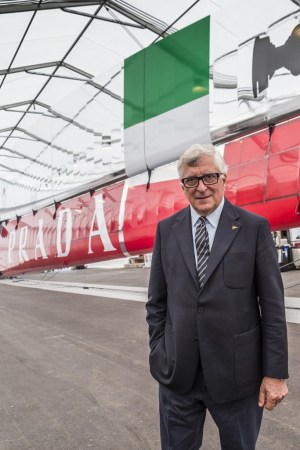 “We are all guilty, designers and entrepreneurs alike. We’ve been selfish and did not catch the opportunities offered in the Nineties. We simply believed Milan would continue to be successful,” said Prada chief Patrizio Bertelli, the Chamber of Fashion’s newly appointed vice president. “The composition of markets has made the position of Milan more critical. The whole system should recite the mea culpa, but now that we’ve realized this, we are working on revitalizing Milan.”

“This is a team that will make the difference,” said a beaming Mario Boselli, the newly confirmed president of the association. “In two months they did what I would never have imagined.”

Within the committee, different commissions have been appointed to decide, among other things, on show calendars, the industry’s pipelines and on the search for a ceo, a new position. Boselli said he hoped to appoint someone by the summer. Zegna, who heads the committee charged with finding a ceo, said the executive should be someone who “thinks global and acts local.”

“We are in a building phase and we have the ambition that the Camera della Moda will become the industry’s most representative organization, one that will sit at the table with other [equivalent] groups,” said Sassi. “The message is that this is the turning point. We are working together as it has never been done before.”

“If Milan has declined, it’s because of everyone’s selfishness. We should all be less selfish and more open,” said Bertelli.

“We must show unity of intent, and be more productive, there is no time left to wait,” added Zegna.

While the board is still mapping out details, a few key guidelines have already been set.

“We should not adapt to the calendars of others, and we should not move our days, which would only create confusion for buyers and press,” urged Bertelli. “If Anna Wintour doesn’t come, it’s her problem, it is she who will have to adapt [her schedule].”

The committee has agreed on a six-day calendar, to avoid the “indecent long-weekend compression back in 2009 and 2010,” said Boselli, noting that the dates will continue to be scheduled for four seasons at a time and are now set through 2014.

Bertelli lamented that young designers used to be positioned at the tail end of the calendar, when most of the international press had left Milan. Their shows will now be distributed throughout the week.

Boselli said there will be some evidence of the new course of the Camera during Men’s Fashion Week at the end of June, but the main changes will be apparent in September, to coincide with the women’s shows.

“We are imagining two or three big events that will have people around the world talk about Milan,” he said.

The Chamber of Fashion will be able to rely on more cash. Starting in 2014, it will have 4.7 million euros, or $6 million at current exchange, in its coffers, 300 percent more than in the past years. “Without resources, you go nowhere,” remarked Boselli, noting that the British Fashion Council, for example, can count on 8.5 million British pounds, or $13 million. “Big brands are being very generous, as each gets one vote whatever amount it pays to the Camera. This is a sign of maturity, generosity and altruism,” said Boselli. Companies pay a yearly fee in proportion to their revenues, from a minimum of 5,000 euros, or about $6,500, to a maximum of 250,000 euros, or $324,000.

“We don’t believe we should go ask for financial aid [from] politicians who don’t have the means — nor the [hearing] now, but we can ask for spaces for events, for example,” said Bertelli.

The issue that Giorgio Armani and Dolce & Gabbana are not part of the Camera was raised, especially in light of the fact that their respective shows appear on the official calendar.

“This is ambiguous, and not correct,” said Bertelli, “but associations are free entities and their members should recognize themselves in them. It’s up to them; we are not [accusing them of anything] and for Men’s Fashion Week their brands will continue to be on the calendar. There’s no vendetta here, but they know they won’t be on the calendar going forward [if they are not members of the Camera].”

Bertelli noted that the Camera convinced Della Valle, who could not be at the conference, to be a part of the association, “even though his brands do not hold fashion shows.”

When Sassi was asked if Valentino would consider showing its men’s collections in Milan now that Burberry has decamped to London, Bertelli jokingly said: “We’ll organize big parties here that Valentino will pay. We want the brands to remain part of the Camera but the association must be good to them, we must be proactive, not rigid. Valentino is not showing in Milan but we are happy it’s part of the Camera.”

Boselli said there are plans to expand the number of brands within the Camera, “without compromising on excellence, quality and service. It’s not about the dimension of a label.”