Prada, Fendi, Valentino, Hugo Boss, Dior and Miu Miu's effort to host events for hundreds of guests to watch the show live in China paid off.

Prada hosted a reception for 180 guests to watch the show at Rong Zhai mansion in Shanghai.

LONDON — Can’t fly to Milan or Paris? No problem. Let’s throw a fancy party and ask the brand ambassadors’ fans to watch the show all together.

In a season where global travel became impossible, satellite viewing events have become a popular choice for brands to engage with local editors, influencers, and VIPs. Louis Vuitton took over the Electric Cinema in London’s Portobello Road and served popcorn while guests watched the show live on the silver screen. Miu Miu hosted an intimate lunch for its German community in Berlin to watch the streaming. Socialites in Hong Kong even voluntarily dressed up and gathered in fancy hotel suites to enjoy the shows together as a stay-cation.

Yet nothing was done to the lengths brands went to in China, the world’s largest luxury market, and the only source of growth for most amid the pandemic.

Prada, Fendi, Valentino, Hugo Boss, Dior and Miu Miu hosted events for hundreds of guests to watch the show via livestream, which was accompanied by celebrity photocalls, cocktail receptions, seated dinners, and comprehensive digital campaigns across all social media channels for record-breaking results. 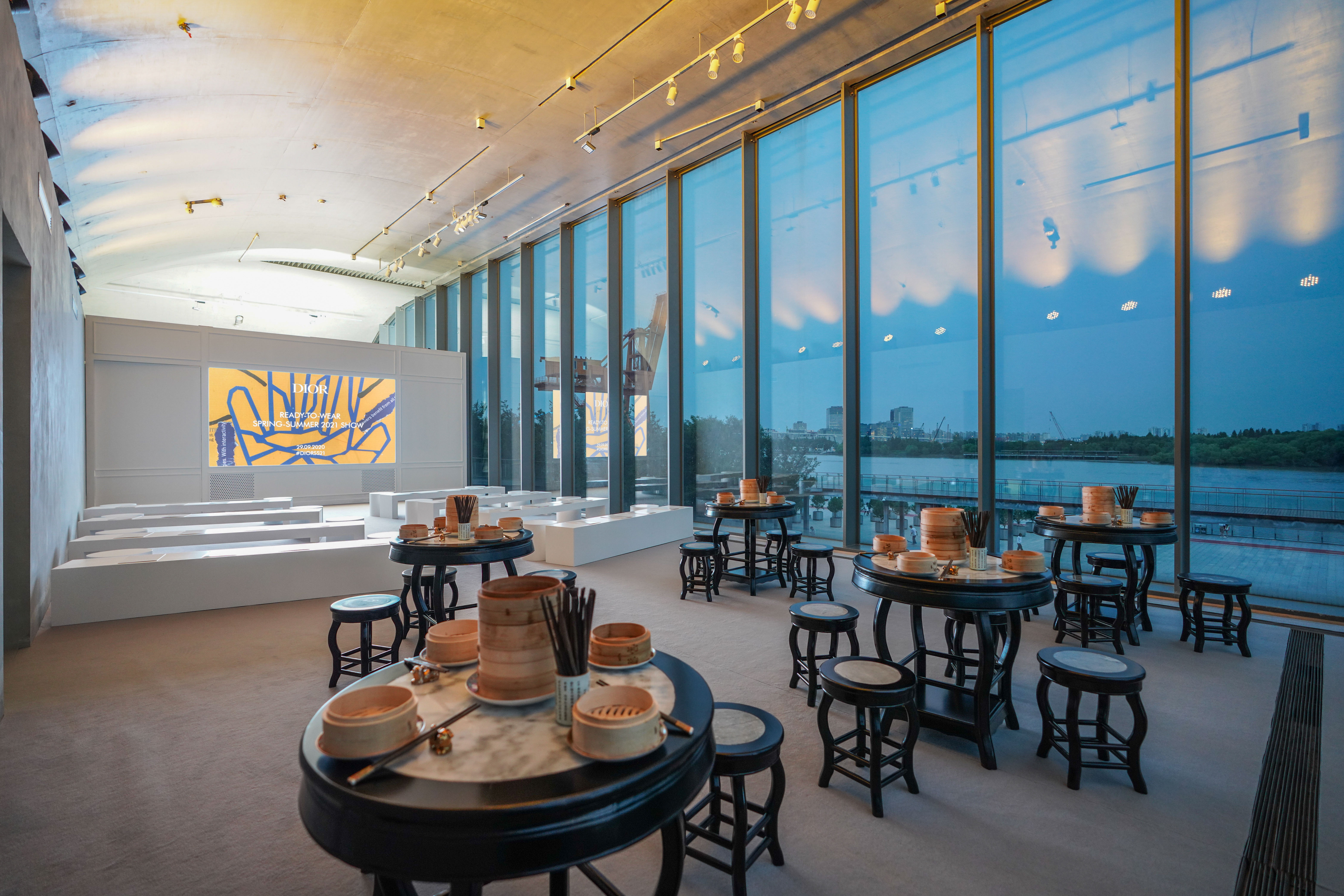 The brand hosted a livestreaming warm-up and panel discussion session in Shanghai’s Long Museum with three of its brand ambassadors — Zhang Xueying, Yang Caiyu, and Meng Meiqi — and guests could enjoy fresh dim sum and mooncakes while watching the show.

Prada hosted 180 guests — including brand ambassadors, influencers, high-profile editors, and artists — for its viewing reception at Rong Zhai, followed by dinner and cocktails. The livestreaming of Raf Simons’ and Miuccia Prada’s first co-designed collection for the brand on its official Weibo and Douyin accounts saw a record-breaking 48 million participating users exploring the show as well as the viewing event. Livestreaming on Weibo alone had 32.7 million views (15.84 million during streaming, and 16.86 million in playback), and the Weibo hashtag #PradaSS21 hit 170 million views in one day, and now stands at 420 million views. 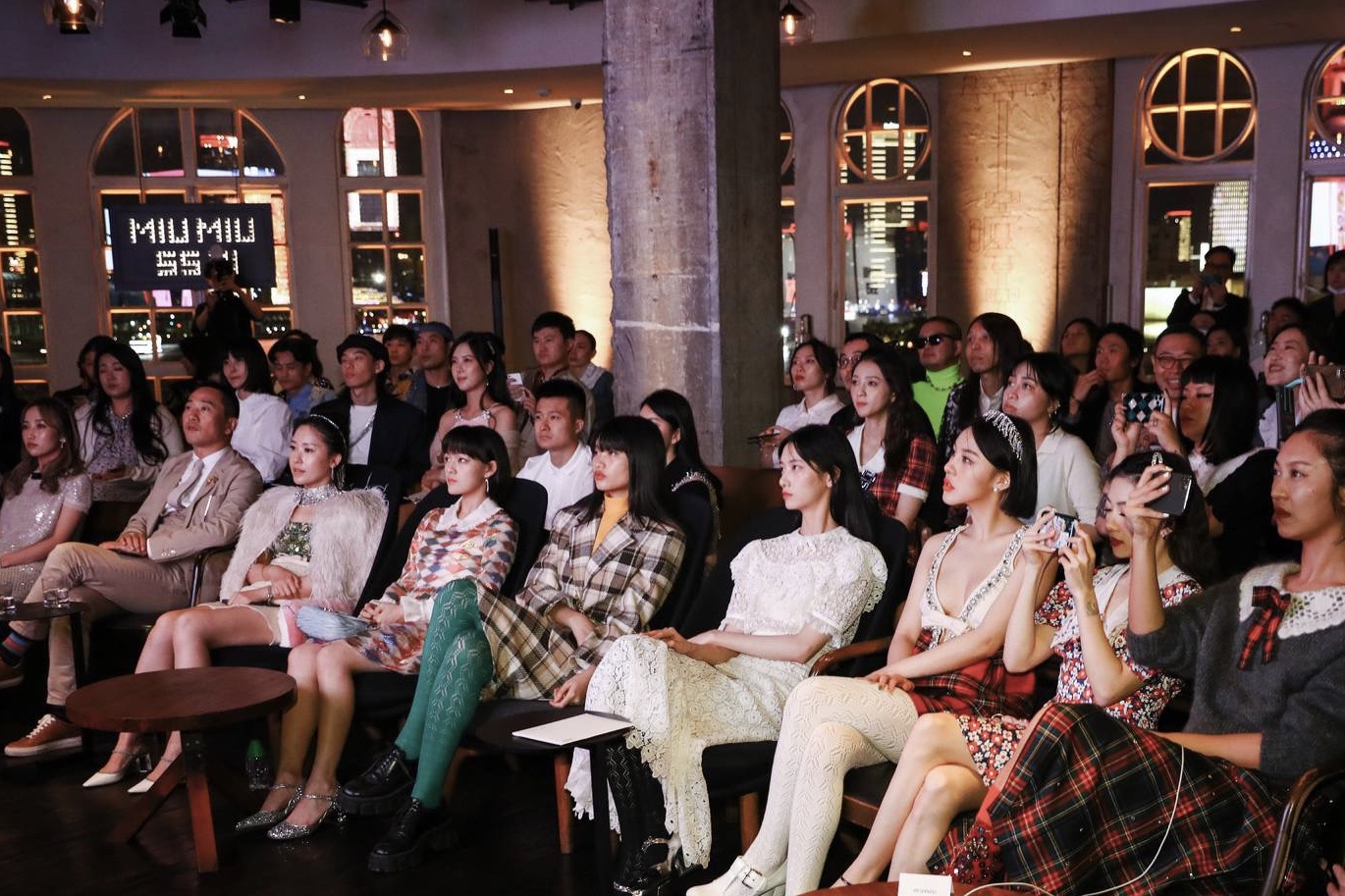 Miu Miu viewing event at Mercato by Jean Georges on the bund in Shanghai.  Courtesy

Miu Miu hosted its own viewing and dinner event at the Michelin-starred restaurant Mercato by Jean Georges on the Bund with a friend of the house, actress Wen Qi. The brand’s spring 2021 show, which featured Kate Moss’ daughter Lola Moss’ runway debut, attracted over 5 million views on livestreaming and 30 million views with the Weibo hashtag #MiumiuSS21, which also set a record for the brand in the region.

Fendi threw a viewing dinner party for 80 guests at the newly opened restaurant KOR in Shanghai, which is owned by Oscar Wang, a regular collaborator with the brand in China. The main dish for the night was Fendi-monogrammed pasta salad. Hugo Boss, meanwhile, hosted a gala dinner with 180 guests at 55 by The Group, a high-end event space in Shanghai. Four huge LED screens were erected behind the long dining table so that guests could enjoy the show as the dinner proceeded. Over 5 million tuned in for its show’s streaming on WeChat, Tmall, and Tencent Video. 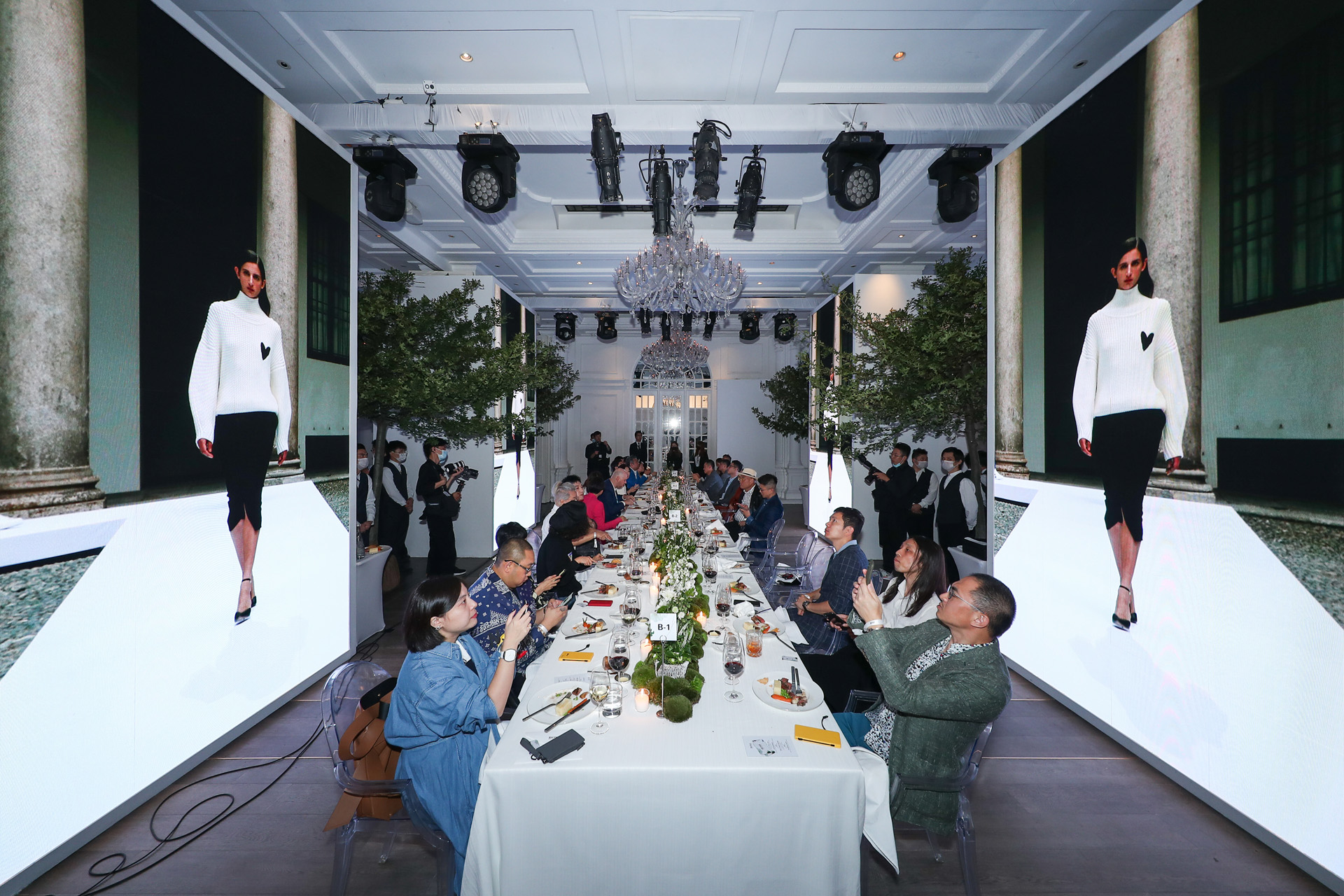 Hugo Boss gala dinner in Shanghai, where guests can watch the livestreaming while the dinner proceeded.  Lihao/ Courtesy

Valentino took over Sir Elly’s Bar & Restaurant at Shanghai’s Peninsula hotel, which comes with an unparalleled view of the Shanghai skyline, for its screening event. The brand invited over 300 guests, of which 90 were influencers, to watch the steaming, and had brand ambassadors Tiffany Tang and Lay Zhang, and singer Li Wenhan and members of the popular girl group The9 posing in front of a giant Valentino logo with the city’s iconic skyline as the backdrop.

The brand did not disclose viewing numbers for the streaming, but the Weibo hashtag #Valentinocollezionemilano had 83 million views, and a series of short videos where celebrities urged their fans to watch the streaming had a total of around 5.5 million views on Weibo.

Influencer Rita Wang, who attended most of the screening events, told WWD that she enjoyed the new experience. “I miss sitting in front rows and watching the shows in person but watching the shows in Shanghai saved me lots of time in travel. And the food was amazing at those dinners, especially at Miu Miu,” she said.

Yu Zheng, founder of the popular Weibo account Fashionmodels, said Prada provided the best experience among the brands. “The fact that it was hosted in Rong Zhai already gave guests a different level of branded experience. And I feel like you have more interaction with brands than going to fashion weeks in Europe. You have the pre-show cocktail, and post-show dinner to talk to the brand, which you get to learn a lot more than just sitting there at a show,” he added. 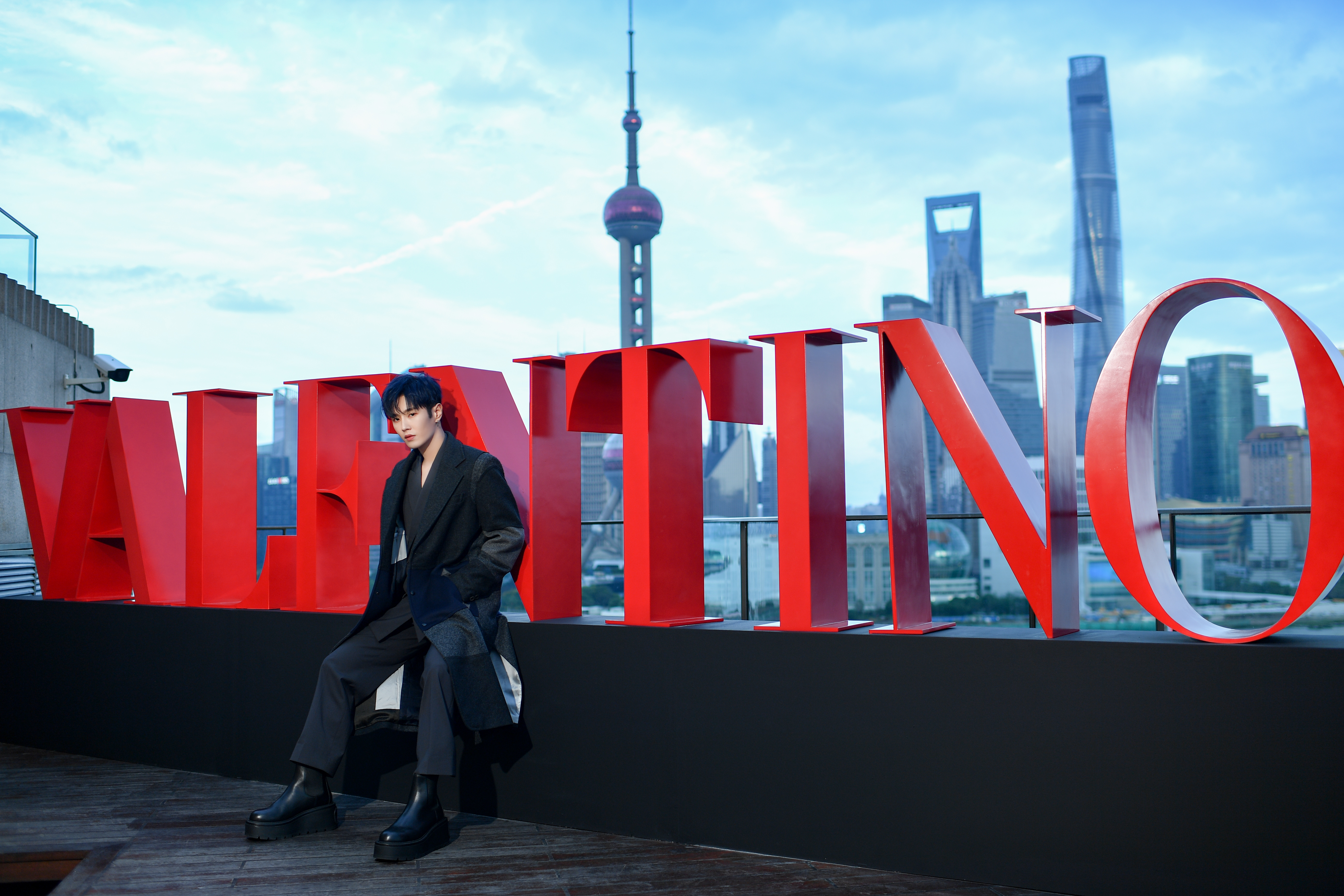 Big brands such as Louis Vuitton, Chanel, and Hermès that did not organize physical events in China saw fewer online engagements this season. The hashtag of #LVSS21 and #HermèsSS21 had only 30 million and 6 million views, respectively, on Weibo. Chanel’s livestreaming viewership was 11 million on Weibo and 3.3 million on Tencent Video.

Meanwhile, a series of Matthew Williams’ Givenchy debut posts on the brand’s official Weibo account, which has over 1.6 million followers, only attracted low single-digit shares and likes. In comparison, Balenciaga’s summer pre-21 collection video had 220,000 views, 430 shares, and 960 likes on its official Weibo account.