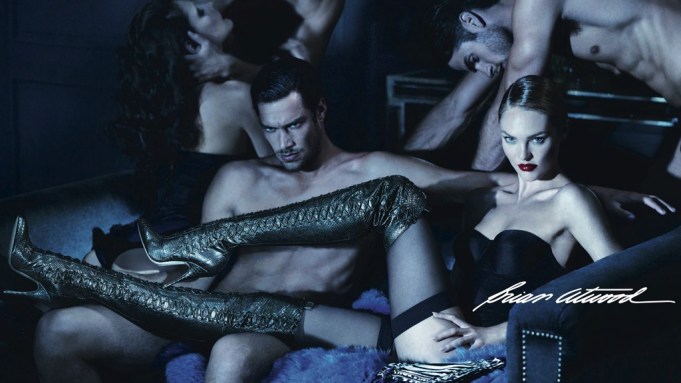 Jones bought Atwood’s company last month, and the designer is gearing up for a series of major initiatives, including a freestanding store, a revamped digital flagship and his first ad campaign.

The designer, who still has an ownership stake in his namesake brand and serves as creative director, fostered a relationship with Jones when the company produced the designer’s contemporary B Brian Atwood collection through a licensing agreement last August.

While the designer’s collection has more than 200 points of distribution worldwide, he is eager to open his own stores with Jones’ backing. The first will be located at 655 Madison between 60th and 61st Streets, and will debut in early September.

Still in its early phases, the 1,500-square-foot space, designed by William Sofield, will have the largest selection of Atwood’s designer and contemporary collections, with more than 50 handbag styles. Atwood said the store will be driven by the designer line — which will occupy two of the four main areas, including 25 to 30 exclusive styles that will be available only at that location. B Brian Atwood and handbags will each have their own sections as well.

In 2013, Atwood would like to open three more stores, and five years from now he hopes to have 13. “I like odd numbers,” he said, adding, “We were just in London looking at locations. It’s definitely about finding where business is going country by country and what the best markets are for the brand. For sure we will soon be opening in Los Angeles, Bal Harbour, London and Asia, but it’s really just getting the right spots.”

The biggest market for Atwood right now is the U.S., then Russia and Asia, especially Hong Kong, but a priority going forward is South America — a region the designer has yet to tap.

“For the type of shoe I create, it’s a no-brainer — we have to open a store there. We have to figure out how and who the best partner would be for that. Brazil is an international market but it’s figuring out the taxing and the logistics,” Atwood said.

He also sees stand-alone B Brian Atwood stores in New York’s SoHo and in American malls in the not-too-distant future.

A redesigned digital flagship at brianatwood.com will launch in tandem with the Madison Avenue boutique. In addition to selling the brand’s full collections and the same exclusive styles as the store, there will be an invite-only section called the “Vault.” Users can click on the section to gain access, and an invitation will be sent to them via e-mail once they’re confirmed. The area will contain editorial content such as a director’s cut from a branded film or behind-the-scene images, as well as shoes at “hyperluxe” price points that can retail well into the couple of thousands.

“[The Vault] has the craziest, most exuberant, exaggerated designs — like python thigh highs. I wanted to make something really special,” Atwood said. “It’s all about making a woman desire that shoe more than anything. If she didn’t get it, I want her to not be able to stop thinking about it and go get it the next day. I always say my job is done when a woman can’t stop looking at her feet.”

The brand’s first global ad campaign will appear in September fashion books such as Vogue, French Vogue, W, V Magazine and CR Book, and features Candice Swanepoel. Atwood tapped Mert Alas and Marcus Piggott to photograph the campaign under the creative direction of Giovanni Bianco. Alas and Piggott also shot a “sexually charged” short film at the same time which will live online in the Vault, the first in a series of short films around the theme “the sex is in the heel.”

As for his inspiration for his upcoming spring collection that he will present at Milan Fashion Week, Atwood said it’s all about the ankle.

“There is something so sexy about this part on a woman, and these shoes celebrate that,” he said.

Brand loyalists can expect mixed metals, wood finishings, inlaid hand chain work, colored pythons, metallics and lace in watermelon, aqua, purple, apple green, orange, bronze and light platinum gold. “I’m using colored lace that we haven’t seen in a while. It has a kind of retro, Eighties, ‘Like a Virgin’ Madonna vibe, [but] I think there are cool ways to do this. I’m really not afraid to make more daring or bold statement shoes — like using five different colors of python in one style.”